Three Canberra musicians are making digital music by hand, using sensors strapped to their fingers to generate sound through a laptop network.

The musicians load sound samples into a laptop and play them using bendable flex sensors, worn on four fingers on each hand, connected to the computer. Dr Riddell said the sensors are programmed according to the type of music they want to make, but the right hand's sensors usually work as the control system. "It's very open-ended. You can move your finger to turn the sound on [and] another to sweep through the sound in a linear fashion as if you're turning a knob," he said.

For example, in one composition, moving the thumb to bend its sensor will cycle through available samples. Bending the index finger, or the channel control finger, determines which speaker will play the sound (the group uses about eight speakers). The middle finger allows the user to change the start position of a sample, while the fourth finger can trigger a loop.

The left hand plays the different samples (or sounds). Each sensor is assigned one sound, and moving different fingers simultaneously means up to 15 sounds can be produced, said Dr Riddell.

The data generated by the sensors is sent to a microcontroller unit (MCU) on the back of each performer's (specially-made) jacket. Dr Riddell designed the MCU to scan the sensor(s) 100 times per second, which means high quality sound. This data is then sent via USB cable to an Apple PowerBook.

The PowerBook uses a Python script Burton wrote to compile the sensor data as Open Sound Control data, a network sound protocol. This data is then sent via Ethernet cable to a second PowerBook.

"We need two laptops to be connected... to distribute the processing," said Dr Riddell.

"The great thing for our purposes about SuperCollider is it has a server-like architecture. Although we really only use the OSC message protocol," said Dr Riddell.

The group plays as autonomous performers, each with their own samples. However, they've created the idea of 'global sounds', whereby one member can produce sounds that affect what is produced by others.

"In one piece, Simon plays piano sounds, then Somaya comes in with her sounds which affect all of us," said Dr Riddell.

The group's music is "largely experimental", Dr Riddell says. They've used a range of samples, from percussion to drum and bass, and from words to railway sounds.

Also experimental is their performance model. There's no dancing, but Dr Riddell said the group used video to accompany them.

"At the Sky Lounge [in Canberra] we have people who video us and project that on screen. So there's close-ups of our hands, etc.

"You really need to concentrate on the sound while performing. The finger movements can be quite subtle."

The group met around mid-2002 through mutual student acquaintances at ANU.

"It was my idea originally," said Dr Riddell. "I've always been involved in music technology... and felt I needed to move from direct computer-based music and into performance.

"I'd worked with microcontrollers before ANU, but it wasn't until I met Somaya that she had the idea of sensors.

"Then we met Simon who helped with the hardware and programming.”

The group has performed for about a year (11 shows), mainly in the ACT, with some shows in NSW. Shows are sometimes "a question of funding", Dr Riddell said, but this month they've planned nine shows.

As for the future, the group wants to explore the possibilities of the technology. 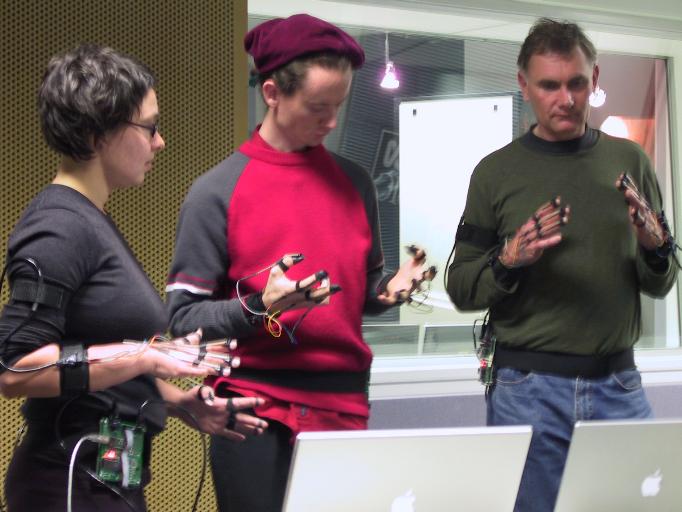