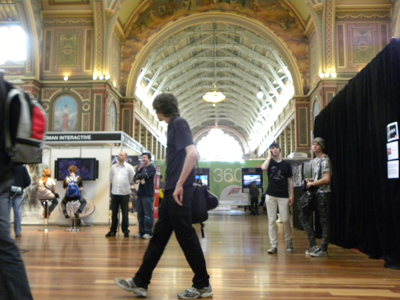 As we slink into the Royal Exhibition Building, we are immediately bowled over by the sheer size of the event. By our calculation, there are around 70-odd stands vying for punters’ attention; covering everything from Wii-projectors to remote-controlled helicopters. As we step into the chaos, men in overalls run hither and thither in a mad attempt to get everything ready for the public’s arrival. In the next hour, the hall will be filled with gamers, cos-players, audiophiles and assorted passers-by; all eager to check out the latest products in digital entertainment.

Our first port of call is 'Extreme PC components' supplier Mittoni. They haven't arrived yet, so we take a few photos of the empty stall and move on. (In their defence, the show hasn’t officially begun yet.)

Next on the list is Australian games developer DozyCow, fronted by the ever-affable Adam Schofield. Schofield is spruiking a new tarmac rally game called Targa Tasmania, which attempts to recreate the real-world event of the same name. “It will completely change the way you play a racing game!” boasts Adam. 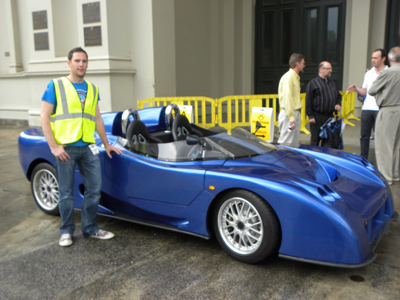 Unfortunately, there's no playable footage of the game at the show — or any footage of any kind. Our request to see some screenshots or concept art is also sheepishly rejected. Hmm. On the plus side, Adam did manage to strongarm a gaggle of luxury car owners into attending the event. For some, this involved driving their topless vehicles through torrential rain. (We would feel sorry for them, if they weren't so fabulously wealthy.) Targa Tasmania is slated to appear on PC, Mac, iPhone and Wii (“pending Nintendo’s approval.”) Stay tuned for a hands-on preview — as soon as there’s something to get our hands on. 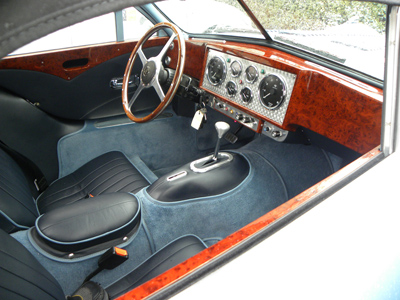 The Devaux Spyder -- requests to take it for a spin were politely denied.

We check back with Mittoni, who are now geared up and ready for action. Their sales manager Patrick Mara is decked out in an astonishing G.I. outfit, complete with battle insignias and Black Hawk Down–style helmet. “This is the Third Space Gaming Vest,” Mara explains. “It simulates receiving blows to the front, side, rear and head.” The vest is supported by around 30 of the most commonly played first-person shooter games on the market. “It also works with World of Warcraft”, Patrick says. “When you cast a spell, you’ll feel it well up from within yourself.” Are there any plans to release a night elf bikini with the same functionality, we joke? “Probably at some point, yes.” Erm, thanks Patrick. 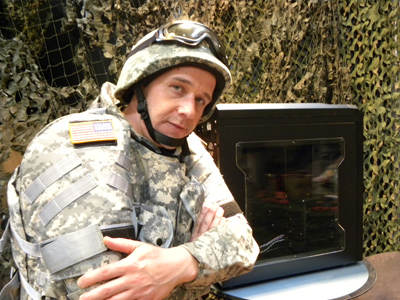 Next up, we chat to Planet Calypso spokesperson David Storey; the Australian wunderkind who purchased an online island for US$26500 at the age of 22. The island in question is part of a sprawling MMORPG with an in-game cash economy.

“I didn’t have lots of cash back then, but I found some investors to back me,” Storey explains. “They asked me to draw up a business plan, which I’d never done before.” So how did his friends and family react? “They thought it was a little bit unusual — ‘you bought a virtual world?’ — but on the whole they were pretty supportive.” (Meanwhile, we hide our Guitar Hero peripherals in the closet lest we get screamed at for wasting money.)

The Treasure Island property turned out to be a canny investment — it now has a real-world value of over $100,000. (Not bad for a bunch of code on a Swedish server.) Embittered by his youth and success, we wish him all the best and move on. 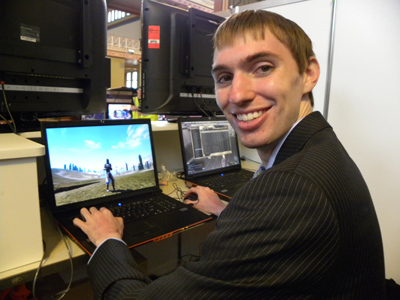 David Storey, with plenty to smile about.