“I don’t want anything associated with Avatar to suck.” These were the words used by award-winning filmmaker James Cameron at Comic-Con '09 to vindicate Avatar: The Game. Like there was ever a chance of that happening. This is, after all, the same critically lauded auteur who demands absolute perfection from everyone he works with, and frequently gets it.

After giving the game a lengthy test-drive at the Melbourne eGames Expo, we can confidentially report that James Cameron's Avatar: The Game isn't going to suck. The astonishing 3D alone should see to that — provided you have a compatible television.

In case you hadn't heard, James Cameron's Avatar: The Game is being touted as the first video game to utilise 3D stereoscopic technology (in fact, it has been beaten to the punch by several games, but none of them are worth remembering). It utilises the same three-dimensional imaging system as the movie — which will apparently be violating our eyeballs this Decemeber. According to Cameron, the game has been in development for as long as the film itself, with as much attention and care lavished on it as a typical Hollywood production. (It shows on screen too, but we'll get to that in a moment.)

Instead of giving gamers a blow-by-blow retelling of the film, Avatar: The Game tells a separate story starring its own hero (so no bored line readings from Sam Worthington then. Hurrah!) The majority of the action is still set on Pandora; the lush, exotic and supremely dangerous homeworld of the Na'vi. We didn't get to witness much of the plot in our hands-on preview — and wouldn't be allowed to report on it if we did — yet we remain confident that Avatar's storyline will deliver. After all, this is the guy who gave us the wonderfully realised Terminator, Aliens and True Lies. (He also gave us Titanic, but let's not go there.)

UbiSoft at the Melbourne eGames Expo 2009

At the Melbourne eGames Expo, UbiSoft was showcasing both the 2D and 3D versions of the game in a slick curtained booth. Aside from the snazzy 3D effect, both games are identical in content, and will actually ship on the same disc. To play the 3D version, you'll need to wear a pair of IMAX-style 3D glasses, which will presumably come bundled with the game. Unfortunately, you'll also need a 3D-capable television — hopefully Santa is feeling generous this year, eh? 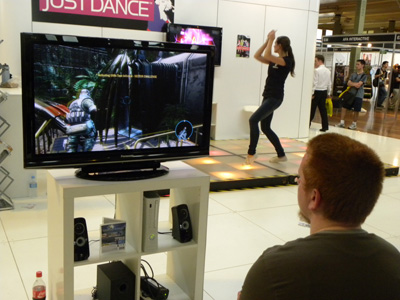 With dinky glasses donned and Xbox controller in hand, we stepped into the world of Pandora and were immediately rendered agog by the luscious visuals within. Cameron wasn’t kidding when he said Avatar would do something transcendental. The depth of field in the sprawling alien jungle is truly awe-inspiring, with a patchwork of vines, cliffs and trees covering the landscape as far as the eye can see (and because it’s 3D, the eye can see very far indeed). 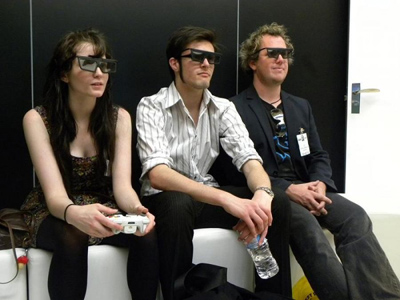 The levels we played were from the human perspective (as opposed to the Na'vi), and saw us dashing about on the planet surface with an army of heavily armed allies. These guys are space marines in all but name, with an aesthetic that borrows heavily from Cameron’s Aliens. There are even mechanised power-suit jobbies trundling about (in one exciting moment, a huge alien took down one of the mech-suits and proceeded to eat its face off).

The game plays like a faster, lusher version of Gears of War with a lot more emphasis on running-and-gunning. If you prefer pure, old school action over the current ‘shoot-and-duck’ template, Avatar: The Game should come as a breath of fresh air. That said, we would have liked to see an over-the-shoulder 'lock in' move (i.e. — as found in every third-person shooter since Resident Evil 4). As it stands, you're stuck with an on-screen cross hair and a weird scope view. 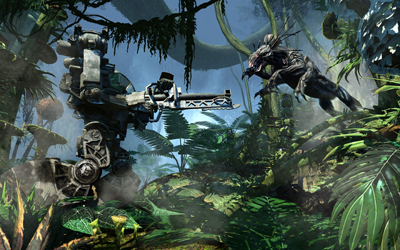 Game over man! Game over!

As we progressed through the level, a menagerie of bizarre creatures assailed us at every turn; the highlight being a huge hippo-like abomination with the head of a hammerhead shark. Dodging and lots of bullets are essential to survival. We were limited to a machine gun in our preview, but rest assured the arsenal of gun-porn in the game will be extensive: including armour and weapon upgrades. At one point, we hopped into a fearsome looking assault vehicle and tore around the jungle floor with our allies in hot pursuit. It was difficult to tell how well the car handled, as we were pretty much driving in a straight line, but it was fun all the same. 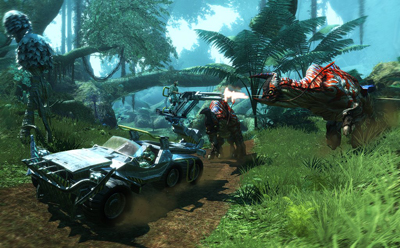 The game’s 3D ‘camera’ is clever enough to keep the centre of the action in focus, with the assorted beasts charging through a blur of foliage in razor-sharp detail. We did have some teensy reservations, however. Firstly, while the depth-of-field effects and screen-popping visuals are all very impressive, the characters in the foreground have an unusual 2D quality — it almost looks like they’ve been painted onto a window, with the jungle on the other side. We also noticed something weird: the 3D doesn’t seem to work on car wheels. We suspect this is because they are revolving too fast to render, but whatever the reason, they looked rubbish and went some way to spoiling the 3D effect. Then again, maybe it had something to do with our glasses. 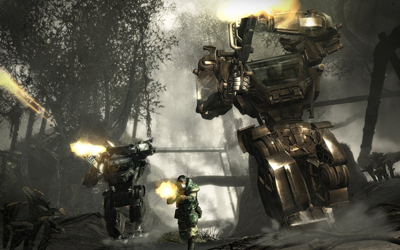 So there you have it. While we do have some reservations, James Cameron’s Avatar: The Game looks set to deliver on its promise of not sucking — and then some. With any luck, the game’s storyline, set pieces and sense of variety will match the 3D eye candy. Stay tuned for our full review, coming soon.