How does somebody land a job on a professional e-sports team? What sort of training is involved? How much money can you make? Are all-girl teams the real deal, or are they just vacuous eye candy? These were some of the questions we posed to Team Immunity owner and manager Tony Trubridge at the eGames Expo 2009.

Team Immunity is Australia's leading e-sports team, with a string of wins in professional-level tournaments around the world. Now in its sixth year, the team is expecting big things for 2010, with major sponsor Intel allowing them to compete regularly on the international stage. We caught up with Trubridge in the lead-up to the expo's eGames Masters event — which the team went on to win after a series of grueling elimination rounds. Here's the interview in full:

GamePro: G’day Tony. Why don’t you start off by telling us about e-sports in general?

Tony Trubridge: Sure. E-sports stands for ‘electronic sports’. Essentially, it’s about video gaming at a highly competitive level. My guys train five hours a night, five days a week, which is more than some professional footballers manage. [pause] Maybe they don’t hit the gym as much, but it’s still a big commitment!

GP: What does your roll as manager involve?

TT: I’m actually the owner and manager. I look after everything from recruiting players to organising international trips, including flights and accommodation. When money needs to change hands, I’m the one that steps in to make it happen. We pay for our teams’ flights, accommodation, taxis, shirts and other gear. Our key players are also paid a monthly salary to play. 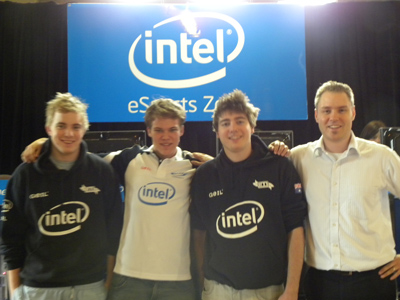 GP: What games does Team Immunity compete in?

GP: How did the all-girls team come about?

TT: This is [Team Immunity’s] sixth year of running, and it’s something I had been thinking about for a while. I wanted to help promote female gaming in Australia by creating an all-girls team that plays in mixed competitions. Obviously, there are a lot of stereotypes out there — especially for girls who want to take it seriously. They often cop a bit of flak: “you’re a girl, you’re no good”, things like that. Our [all-girls] team helps to showcase that there are girls out there who take competitive gaming seriously and want to have a good time, just like everyone else.

GP: What does each team’s training involve?

TT: Well, e-sports is a very unique sport in the sense that we can literally do dry runs on the field and compete against other teams. This sets us apart from your AFLs or your NBAs which have a very firm fixture in place. They have to practice amongst themselves, whereas we can practice against other teams whenever we want. We also practice one-on-one skills — this includes trying to improve hand-eye coordination, perfecting aiming, and working out different strategies. We can then take these different skills onto the cyber battlefield and test them out immediately. So the work we put in is very practical and goes a long way.

GP: What do you think has been the most important ingredient to your teams' success?

TT: Hard work, dedication and even more hard work! I've got my guys here today and they're been here since the crack of dawn, helping to set everything up. This is basically just a community-based event but they're here making sure everything is working and everything is tested: there's a huge amount everybody does outside of [competitive gaming]. Our partners are also a very important ingredient to our success. Hopefully we can get some more partners to work with us so we can get overseas five or ten times a year, instead of three or four times a year.