Halloween is behind us, and you know what that means: The holiday season has descended. This time of year is a photographer's dream come true: Between now and January, it seems that every few weeks we have a new reason to put lighted decorations outside the house. In the past I've given you some general advice for taking holiday photos, but this year I thought it would be fun to take an in-depth look at the best ways to take photos of those holiday lights. You can use these tips over and over again this fall, whether you're shooting Halloween, Chanukah, Christmas, or New Year's events.

When you head out to shoot some holiday lights, be sure to make sure your camera is ready. You can get good results with almost any sort of camera--you don't need a digital SLR--but I do recommend using a tripod. Nighttime exposures are always somewhat slow, and it's just not possible to freeze the action when the shutter is open for a whole second.

This is the most important part of the stew--and the ingredient that most people omit when they try taking holiday lighting photos. 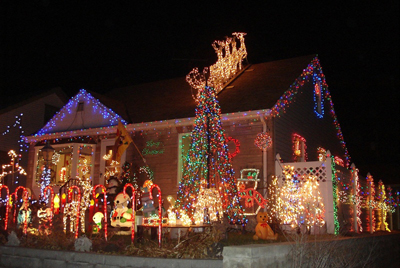 The remedy? Shoot shortly after sunset, when there's still some light in the sky.

Set up in front of the lighting display when there's still plenty of light in the sky, at least half an hour before the sky goes totally dark. You should be able to see the display lights, but they should still be fighting the natural light in the sky.

One last thing to consider before you start shooting: the exposure settings. If your camera lets you adjust the white balance, you should set it to "tungsten" or "incandescent." These settings will give you a richer, bluer sky as well as better lights. 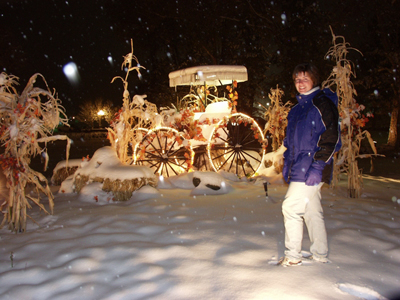 You can leave the camera on its automatic setting, but if you can dial in manual and adjust aperture and shutter separately, you can try starting with f/8 and a half second. To change the overall exposure, open the shutter longer (for a brighter scene) or shorter (for less exposure). To make the strings of holiday lights brighter and more dramatic, open the aperture (a smaller number--like f/4).

If the lights are already too bright and overexposed, you can throttle the aperture down to f/11. 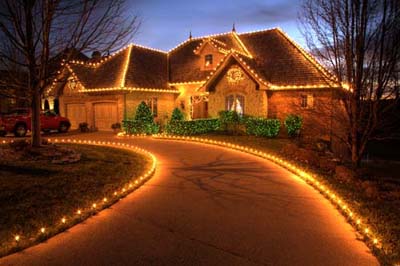 Getting to the scene early enough is more than half the battle. Start taking some photos and check the results you're getting. As the sky gets darker, you'll start to hit a sweet spot in which the background sets a dramatic tone for your photos, but the lighting takes over the foreground and becomes the "protagonist" in your scene. 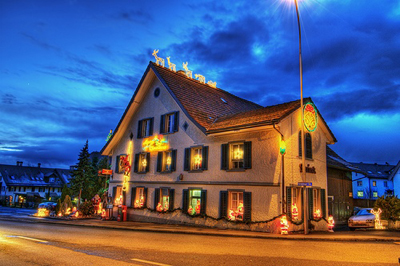 Be sure to take a lot of photos and try a number of different angles, but you're guaranteed to get some great photos if you "go wide" and include a lot of sky.

This approach means you won't be able to shoot a lot of different locations in a single night, but the holidays last for months--you've got plenty of time.