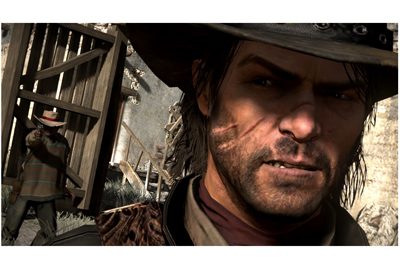 A Fistful of Duffers

The above words have been uttered to countless wayward cowboys in more Spaghetti Westerns than we care to mention. Yet they could just as easily be directed at Western video games. Over the years, more than one publisher has attempted to win back the West as a viable games genre, only to have their efforts gunned down by unimpressed critics. Mad Dog McCree, Lucky Luke, Desperados: Wanted Dead or Alive, Outlaws, GUN, Dead Man's Hand — the list goes on and on. Despite their endless scope for action and adventure, Western games just don’t seem to belong on consoles, which is a darn pitty.

One game that did put Westerns back on the map was Rockstar Games’ Red Dead Revolver. This unashamed ode to Sergio Leone’s gritty filmography was everything a Western video game should be (mixed in with a dose of quirky Rockstar mentality, natch). In addition to being the world’s first 3D sandbox Western game, it also introduced the much-loved Dead Eye mechanic, which its quick-draw rivals have been aping ever since. Without question, it was the best video game to feature a cowboy this side of 1985’s Gun.Smoke.

Well, until now that is. Come April 2010, there’s going to be a new sheriff in town, and its name is Red Dead Redemption. Last week, we were lucky enough to get an up-close-and-personal look at Rockstar Games’ Western epic, and like an impatient stallion we’re champing at the bit to see more. Here’s what we learned during our daytrip to the Frontier Plains. Needless to say, it ain’t no country for old men...

The Game With No Name

Red Dead Redemption is the long-awaited sequel to Rockstar Games’ veteran PS2 shooter. Amazingly, it has been in development since the original game burst through saloon doors in 2004, and was the genesis of Grand Theft Auto’s RAGE engine. That’s right ladies and gents; the RAGE engine was actually designed with Red Dead Redemption in mind, not GTA IV (although back then, the game didn’t have a name — just like Clint Eastwood in The Good, the Bad and the Ugly). Billed as an open-world Western Adventure game, Red Dead Redemption is like a period Grand Theft Auto. Replace the cars with horses and you’re kind of halfway there.

But to dismiss Redemption as a sepia-tinged GTA is to sell the game short. From what we’ve gleaned, it offers a far richer gaming experience than its urban progenitors, with freedom and random occurrences taking precedence over scripted events. Honour and morality will also play a big part in the game, with every good turn and misdeed affecting your chances at salvation. Indeed, your character has an ‘honour metre’ which rises and falls depending on the actions you take over the course of his adventures. In short, it’s like starring in your very own Wild West show, with murder, adventure and buried treasure lurking behind every cactus tree. 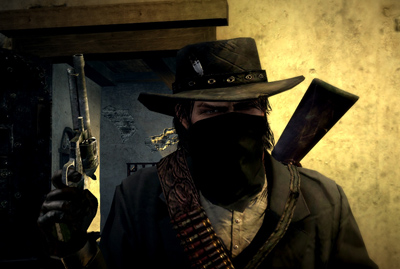 An identity-concealing kerchief is a good way to stay off the Wanted list.

Red Dead Redemption stars John Marston; a partially reformed outlaw with bloody retribution on his mind. In a plot partly inspired by Australian Western The Proposition, Marston finds himself on the right side of the law — blackmailed into hunting down his former bandit buddies via a chilling ultimatum. Set at the turn of the 20th century when frontier life was beginning to fade from existence, the game promises to be a grimmer and more realistic affair than Red Dead Revolver. Needless to say, the line between good and evil will be continually blurred, with Marston’s Bureau paymasters proving no less notorious than the gang members he is forced to hunt. The Mexican Revolution of 1910 is also tipped to figure big in the main narrative, with executions and uprisings occurring on every street corner. You can elect to save condemned prisoners or watch their grisly fate unfold — with every decision affecting Marston's honour. 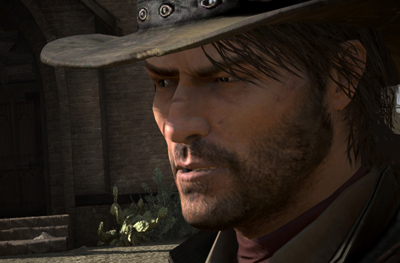 John Marston: a man caught between a rock and a hard place.

Rockstar Games is keeping the deeper plot mechanics under wraps for now (indeed, the cut scenes were forcibly skipped during our preview session), but we remain optimistically excited. After all, this is the same company that brought us Max Payne and Niko Belic. Salut.