Last week, we saddled up our faithful steeds and headed deep into the heart of Sydney's lawless badlands. [Er, he means Surry Hills. — Ed.] Our mission: to check out the latest build of Rock Star San Diego's Red Dead Redemption. As you'd expect, our guns didn't stay holstered for long... and neither did our expectations. We've said it before and we'll say it again — Red Dead Redemption is shaping up to be one of the breakout hits of 2010. This is pure fantasy wish-fulfilment; provided your fantasies involve being the Man with No Name. As Western fans, we're officially ridiculously excited. 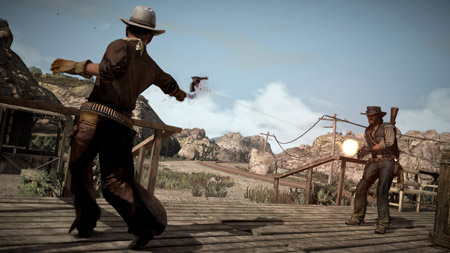 For those who aren't in the know, Red Dead Redemption is an open-world Western adventure game that has been six years in the making. With a huge open world filled with random occurrences and a deep focus on honour and morality, it promises to deliver a unique spin on the familiar GTA template. It's like starring in a Deadwood-style TV show; except the mayhem covers half a continent instead of a single town. 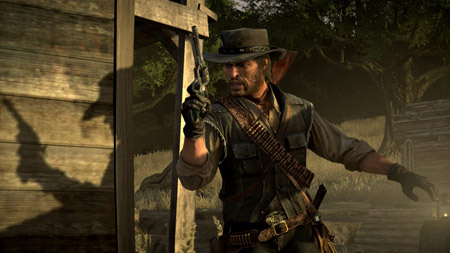 In Red Dead Redemption, you fill the spur-heeled boots of John Marston; a partially reformed outlaw who has been blackmailed into hunting down his former partners-in-crime. The game is set at the turn of the 20th century, at a time when the frontier cowboy was fading into myth. (Interestingly, cars actually existed in this time period — hopefully there'll be a jittery carjack mission in tribute to Grand Theft Auto.) It is within this transitionary world that John Marston must leave his mark — will he be remembered as a ruthless snake, or a man of substance and honour? Naturally, his fate lies in the hands of you, the player...

At the tail-end of 2009, we presented you with a travelogue of adventures in Red Dead Redemption's sprawling open world (e.g. random hold-ups, treasure hunting; that sort of thing). This time around, our preview will focus on the story missions in the game, which range from mine-cart shenanigans to shantytown shootouts. We also finally got to see some in-game cinematics — something that Rockstar has been keeping under its hat until now. Needless to say, the company's roster of superbly crafted characters will need to make room for a few more additions (but more on that later).

The first mission we looked at was a hands-off demonstration set deep in the mountains of Mexico. In the mission, Marston fights alongside the Mexican army to rid a fort of insurgents. The battle we witnessed was surprisingly wide-scale, with desperate banditos making suicidal charges as their allies provided support from the cliffs above. The latter were quickly cut down by Marston's period sniper rifle, which sports a grimy, fish-eyed scope. This didn't seem to deter his aim, however, with each shot bringing down a screaming enemy in cinematic style.

Once the cliff tops were cleared of mischief, Marston and his comrades were free to charge into the fray and finish off the remaining rebels. We were particularly impressed, and horrified, by the close-up kills in the game — these are essentially scripted animations that allow Rockstar to ramp up the brutality to 11. Naturally, the series' signature Dead Eye mechanic also came into play. This sees Marston targeting multiple enemies in slow-motion, before letting off a barrage of lethally accurate bullets. 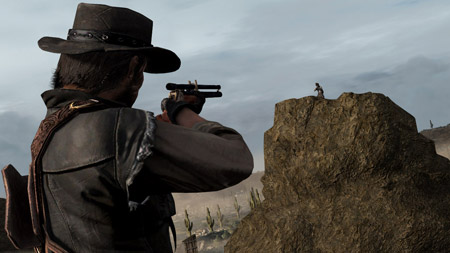 One of the most memorable things about the battle was the proliferation of dust and smoke. Indeed, it was often difficult to see enemies lurking in the thick, pluming clouds. Rather than deter from the experience, we think this adds an extra layer of realism and tension to the gameplay — think of the climactic scene in The Thin Red Line or Gangs of New York. One thing's for sure, Rockstar San Diego is teasing new life out of the RAGE engine. The myriad environmental effects are definitely a step above GTA IV, with smoke and dust being just one example. After the battle was won, Marston had a brief chat with the army's prostituta-obsessed commanding general, DeSanta, who congratulated him for crushing the rebels. It was at this point we realised these were the very same insurgents Marston was aiding and abetting in last year's preview. It appears John has pulled the classic 'anti-hero' move and switched allegiances partway through the game. Not very 'redemptive' of him, is it? While we're all for flawed and layered characters in video games, we hope Rockstar manages to make Marston somewhat likeable. We still have sour memories of Johnny Klebitz from The Lost and Damned. But we digress...