Ever since our encounter with Panasonic's first 3D TV in Australia, we have been keen to see what other manufacturers have up their sleeves. It turns out we didn't have to wait long; we got to see Sony's crack at 3D in the living room at the company's 2010 LCD TV range launch this week.

Out of the 26 new televisions Sony launched this week, only two models in the LX900 series will be able to display 3D content out of the box. Five more models in the HX900 and HX800 series will be able to display 3D as well, provided you first purchase an infrared transmitter (like a Wii sensor bar) and at least one pair of Sony's custom glasses. Panasonic has quoted £100 (AU$173) for a pair of its glasses, and prices are likely to be similar for Sony's. 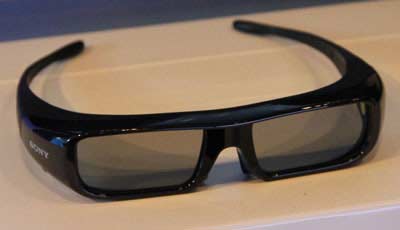 Sony's custom active shutter glasses aren't the most comfortable we have worn.

Like Panasonic, Sony uses active shutter technology to display 3D content. This means that the viewer must wear custom, battery-operated glasses which sync to the television and block each eye alternately to create the desired effect. The television transmits 100 frames per second for each eye, which is why you won't see 3D televisions with a refresh rate of less than 200Hz (most plasmas have a refresh rate of 400-600Hz). Sony's glasses should last 100 hours on a single battery, and have a range of about 5m before they lose sync with the television.

There were a few technical differences between Panasonic's and Sony's 3D TV demonstrations. Panasonic, for instance, used a 3D-capable Neo Plasma TV to display its content. Sony, on the other hand, used its newly announced HX900 LED-backlit LCD TV at its demonstration.

According to a Sony spokesperson, using LCD instead of plasma means the active shutter glasses don't have to be polarised, increasing picture brightness and reducing the "background flicker" and external distractions we witnessed when watching Panasonic's TV. The HX900 TV uses Sony's Motionflow Pro 400 technology, which inserts black frames strategically into a 200Hz image to provide a more fluid look.

The demonstration environment also differed. At Panasonic's demo, we were seated on couches in a typical living room setup with the lights on. Sony's demonstration took place in a darkened room, with viewers standing at a measured distance rather than sitting. Because of this, we couldn't test background flicker or whether Sony's new six degree upward tilt style had any effect on the image. 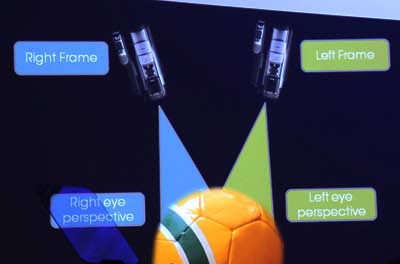 A Sony presentation explains the capture requirements for a "real 3D" image.

Content showed during our 3D demo included gameplay from PlayStation 3 games like Little Big Planet, WipeOut HD and a trailer for Killzone 2. We also watched a scene from the 3D version of Cloudy with a Chance of Meatballs and a soccer match. The soccer footage is what Sony refers to as "simulated 3D," which means content producers create a three-dimensional image out of a two-dimensional source. This provides some depth of field but it isn't the "real 3D" experience that Sony hopes to deliver on its televisions come July.

Seeing real 3D gameplay at Sony's demonstration rather than the simulated mock-up we saw at Panasonic has swayed us a little on the advantages of 3D games. It's definitely more immersive than traditional video games and adds to the experience, provided you aren't prone to sickness from 3D imagery. However, in both Little Big Planet and Killzone 2, we noticed the foreground characters were out of focus and sometimes looked like they had been put through an anaglyph process (separation of red and green colours). A Sony representative said it was "early days" for 3D technology, so we're hoping for an improvement when PlayStation 3 users finally get 3D capabilities. In the meantime, however, we don't think Sony's technology is quite up to scratch.

The animated footage from Cloudy with a Chance of Meatballs didn't really impress us either. Though some 3D elements were noticeable, we found the demo wasn't really a good example of 3D in animated movies. Even a big fan of the 3D film at the same demonstration left unimpressed.

The simulated 3D soccer footage was intriguing, but only because it showed us what movie studios are likely to do as they rush to take advantage of the 3D craze. Though production of real 3D movies is likely to ramp up as equipment for making them becomes more readily available, we won't be surprised if studios begin creating simulated 3D versions of past films, at least initially. At best, simulated 3D footage creates depth of field in an image without any of the exciting elements of 3D imagery. As one viewer at the demonstration said, the soccer players merely looked like "cardboard cut-outs." 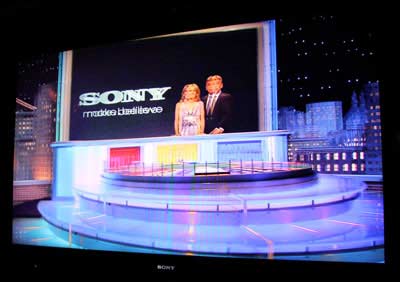 Unless you want the Wheel of Fortune wheel spinning into your face, game shows are best left untouched by 3D.

As a final demonstration of Sony's 3D technology, we were shown a clip of the US version of game show Wheel of Fortune. Though clearly three dimensional, this footage merely demonstrated that there are some instances in which 3D technology is definitely not required.

While the LCD TV used had a quoted viewing angle of 178 degrees, Sony's 3D technology is only good for 120 degrees. While this should suit most basic living room setups, it means you won't be able to sit directly beside a TV and get the same experience.

Overall, Sony's 3D technology has merits but also some creases that must be ironed out. Our experiences here only echo our sentiments from Panasonic's demonstration: 3D technology is here to stay, but is likely to be a long-term commitment for both content producers and viewers. Content, as always, is a major problem when it comes to 3D viewing. With a 3D Blu-ray disc of Avatar unlikely to see stores until November, early adopters of Sony's "monolithic design" televisions may be disappointed.