Twitter is the word on everyone's lips these days and it's now easier than ever to access the social-networking phenomenon on your mobile phone! For those who don't know, Twitter is a microblogging service that enables users to send and read messages of up to 140 characters called tweets.

So whether it's to get around your pesky Net restrictions at work, or just to keep track of life while you're out and about, we've compiled a short step-by-step guide on how you can keep in touch with more than 100 million active Twitter users around the globe through your mobile phone. We've covered the most user friendly way of accessing Twitter using your phone — via a mobile Internet connection — but it's also possible to send and receive tweets via standard SMS messages.

Step one: Ensure your phone is set up for mobile Internet access

The great news is that prices have fallen so much in recent times that mobile Internet access is now affordable for almost anyone. Mobile Internet is also available on almost every mobile phone, even non-3G handsets.

Check out our guide to setting up Internet access on your mobile phone — be sure to pay attention to the information on not getting stung with huge phone bills. 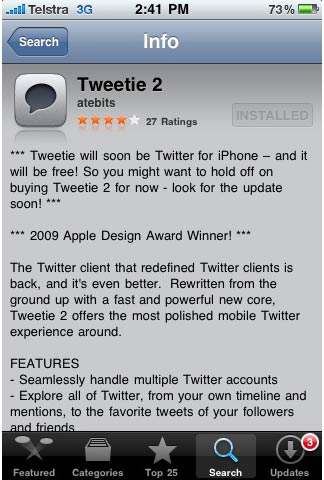 Tweetie 2 is just one of many Twitter iPhone apps, and it will soon become the official Twitter application in Apple's iPhone app store.

A dedicated Twitter application is usually more user friendly and provides more options than using a handset's regular Web browser. For example, the Tweetie 2 app allows you to automatically shrink HTML links, a feature not available when accessing Twitter directly from your phone's Web browser.

To download a Twitter application for your mobile phone, you'll need to access the app store for your particular handset. The user interfaces of the five main app stores are similar, though Apple's app store and Google's Android market are the two standouts in terms of the number of apps available and ease of use.

Many non-Nokia Symbian phones, such as Samsung's HD Icon, don't have a dedicated app store. If this is the case, you'll have to point your mobile browser to the app you want to download. One of the most popular is Gravity but you can find a range of others with a quick Google search.

If your mobile phone doesn't have access to a dedicated app, you can access Twitter directly through your phone's mobile Web browser. Simply type www.twitter.com into the browser's address bar and you'll be able to log in and access the site. Twitter should automatically detect you're browsing from a mobile phone and load the mobile version of the site. If not though, you can access the mobile site by changing the address to mobile.twitter.com. The mobile site is designed to be viewed on a smaller screen and will use less data and load faster than the regular version.

However, dedicated Twitter applications like Tweetie 2 expand on this features set by including trend and user searches, an integrated Web browser for tweeted links and the ability to use your phone's GPS function to find Twitter users around you. 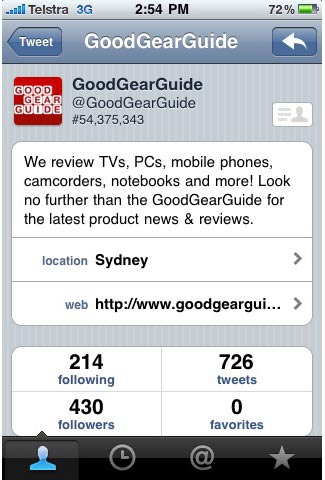 The features and functions of Twitter applications on other mobile phones, including the likes of BlackBerry and Android smartphones, vary depending on the app. These apps are constantly being updated with new features and improvements, so the user experience will continue to improve over time.