Was Facebook ever meant to be this controversial? Between privacy concerns and the Everybody Draw Mohammed Day controversy, the social networking site has been in hot water. These days, an innocent seeming status update can have far-reaching implications — or at the very least, end up chronicled on sites like Lamebook.com.

"WHERE MY IHOP [International House of Pancakes]?"

There is more to this status update than meets the eye. It got 19 year old Rodney Bradford from New York acquitted of robbery charges and out of a 25 year jail sentence. In a world-first late last year, Bradford's Facebook page provided an alibi for a robbery that occurred a minute after the inside joke status directed at his girlfriend was written, proving that he could not have been involved in the robbery — he was too busy eating pancakes and teasing his partner.

Jonathan G. Parker, another 19 year old from the US, was caught robbing a house after using the household computer to check his Facebook account but forgetting to log off. Though Rodney Bradford proved his innocence with his status, Parker typed his guilty verdict in.

A study published in the CyberPsychology & Behavior Journal linked Facebook to increased jealousy in relationships.

Of course, there are also the more common status fights between partners. Subtle hints are the passive aggressive's friend here, with status updates used to drop cryptic messages like "I thought 'friends' were supposed to be 'friendly,'" More often that not, these snappy quips turn into heated online feuds, like the one below. 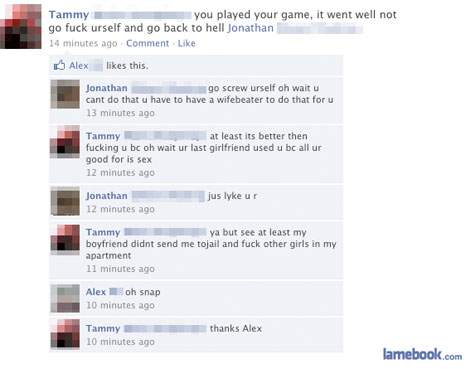 Though there isn't an "is now deceased" option (yet), status updates are frequently subverted into the obituaries, delivering sad news in a less than traditional manner.

And then there are the Fresh Prince memes: 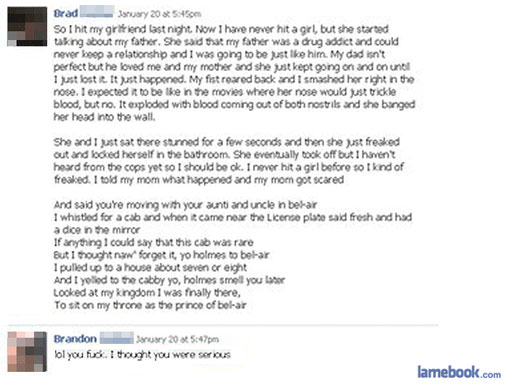 An Oxford University study this year found that having lots of Facebook friends doesn't mean you'll expand your number of friends in real life. On a similar note, posting sexually transmitted disease scares as your status won't help either. Here we find another example from Lamebook.com of too much information:

And here's a little home-grown Aussie version along similar lines: 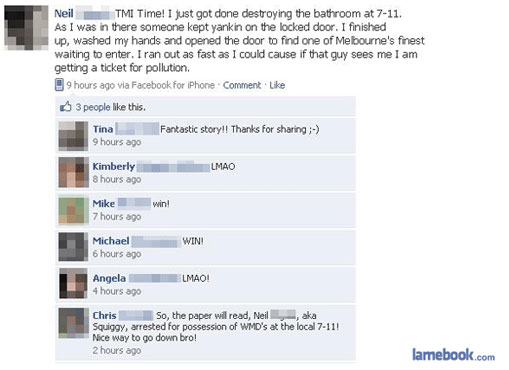 FML, the acronym for "f*** my life", is an internet meme that surfaced a few years ago and became synonymous with Facebook status updates. For example: "been working for 13 hours straight.. no overtime either.. FML." As with former status updates, some FMLs are best kept private: