Dell's Streak may look like a smartphone, and you can make phone calls on it, but its form factor means it's a hybrid device that sits somewhere between a largish touchscreen phone like the HTC Desire and Apple's iPad tablet. It has a brilliant 5in screen and a 1GHz CPU that supplies plenty of power under the hood to ensure the smooth running of the device, including the ability to display HD video. It runs on the Android platform — Dell has made some tweaks to the interface — so it can tap in to the Android Market, which now has more than 30,000 apps available for download. 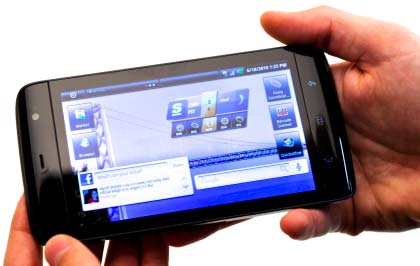 The Dell Streak's screen is 5 inches.

The Streak is designed to hit a 'sweet spot' between typical smartphones and tablets, and while you could use it for phone calls, at 15cm wide, you probably won't want to be holding it up to your ear all the time. The Streak is wonderful for browsing photos, viewing movies, navigating the Web and reading e-books. It's a whole lot easier to carry than the iPad and it offers the flexibility of the Android platform, unlike Apple's closed iPhone OS. At the moment, it's unknown which Australian carriers will offer the Streak and what sort of data plans will be available.

We had a limited hands-on session with the Streak and found it to be easy to use and pretty good looking to boot. It's definitely a head-turning device, especially when it's running a high-def video; its screen looks bright and has very good contrast. 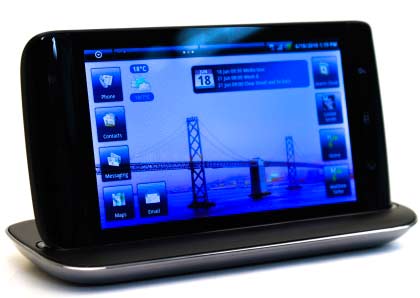 The Dell Streak sitting in its dock.

While the majority of the navigation is done by prodding, flicking and dragging your fingers across the screen, there are three touchbuttons on its right side for quickly going to the main screen or returning to a previous screen. There are physical volume controls on the top of the unit, as well as an audio port, a shutter button for the camera and a power button.

It's a thin unit (only around 1cm thick) with nice curves. Here you can see the top view, which includes the camera shutter, power and volume buttons, as well as the audio port.

The screen is multitouch-capable. It uses capacitive technology and is very accurate. We found the screen to be responsive and the interface was easy to navigate, but small icons or links might still be a little hard to hit, depending on the thickness of your fingers.

Connectivity — in addition to 3G — includes Bluetooth and Wi-Fi, and speeds up to 802.11n can be used. You'll easily be able to log on to your wireless LAN to transfer music, video and photos. The Streak will support over-the-air updates to its platform, including an update to Android 2.2 and Adobe Flash 10.1 later in the year. The Streak's 3G radio can run on UMTS, GPRS and EDGE networks up to 7.2 megabits per second (HSDPA). 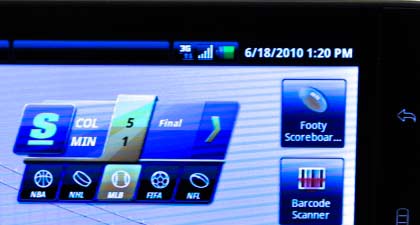 In addition to 3G, you can use Wi-Fi to get online and download apps and data.

An accelerometer is built in and it will automatically change the orientation of the screen depending on the way you're holding the Streak, but it will only work in certain applications. Other nifty features of the Streak include Google Maps integration, which will allows the Streak to be used as a GPS device with turn-by-turn navigation. The Streak has a front-facing 640x480-resoluton camera, as well as a 5-megapixel out-facing camera. You also get a proximity sensor and an ambient light sensor. 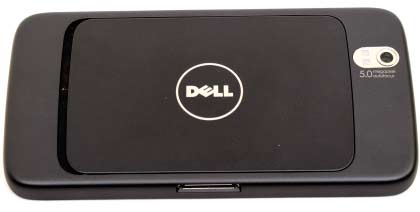 The rear of the Dell Streak houses a 5-megapixel camera.

The CPU is an ARM-based Qualcomm Snapdragon that runs at 1GHz. It gives the Streak enough grunt to display HD video smoothly and it really does look good on the 5in screen. For storage you get 2GB of space on the device itself, and there is also a MicroSD slot, which lets you install a card up to 32GB. You can access the MicroSD card slot easily by sliding off the back cover, which also makes it simple to replace the battery. 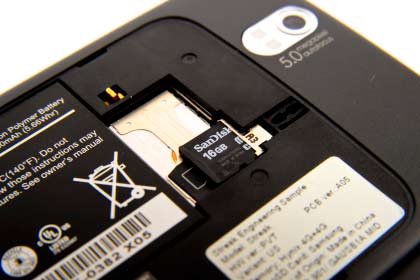 The back cover can be removed easily to give access to the MicroSD card slot.

If you transfer a lot of movies over to the Dell Streak, you can use a dock to connect to a TV and watch them on the big-screen instead of the little screen. The dock has an HDMI output (as well as USB and audio out ports) and even if you don't use it to connect to your TV, it's handy for sitting the Streak on an in-flight seatback tray to watch videos on the tablet directly.

Using the dock, you can output the video signal via HDMI to a big-screen TV.

From our brief experience with the Dell Streak, we can say that it will appeal to people who like the idea of a tablet, but who don't like the size of the iPad. In fact, the Dell Streak is a good smartphone (albeit a big one) and tablet all-in-one device that's perfect for playing media files and interacting with social media sites. But you can even use it for looking over office files wile you're on the go.