The ASUS NX90JQ laptop was launched yesterday at a soundstage in Sydney's Entertainment Quarter. It has been designed to appeal to users who want better sound quality from a notebook. It's a desktop replacement–style, 18.4in notebook for the home entertainment enthusiast. It's got plenty of style, and its design is guaranteed to intrigue many potential buyers. 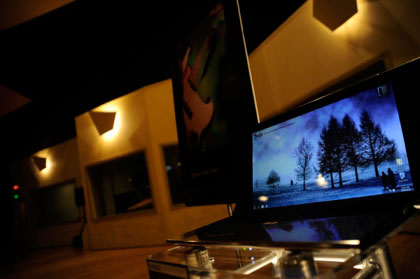 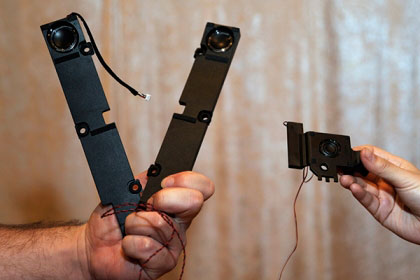 On the left are the speakers in ASUS' new NX90JQ notebook, while on the right is a speaker from a conventional notebook. You can see that the speaker setup in the NX90JQ is much larger.

The larger speakers provide a better low-end frequency range than smaller laptop speakers and, combined with the new codec and amplifier, there is virtually no annoying background hissing when the volume is turned up high. We got to hear it first hand at the Trackdown Scoring Stage in Sydney's Entertainment Quarter. The sound from the speakers really filled the stage and the low frequencies were pleasant to listen to, rather than nonexistent as they are on most notebooks.

However, there is some distortion evident when you play the speakers at their maximum level, but this will depend on the type of music you listen to, too. Listening to opera, the speakers handled the high volumes relatively well and without noticeable distortion, but with rock music, the loud volumes did show up some slight distortion. Nevertheless, even when they are not turned all the way up, the NX90's speakers produce louder volume and, most importantly, cleaner sound than any notebook we've tested to date. 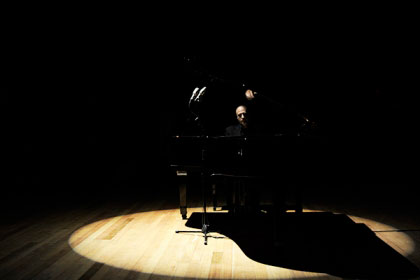 We were treated to a fine performance, which was recorded and then played back on the ASUS NX90JQ's built-in speakers.

But the higher standard of audio quality isn't the only feature that differentiates the NX90JQ from other notebooks: it also has two touchpads. These touchpads are located on each side of the keyboard and have been included in order to improve the ergonomic design of the notebook — you won't have to twist your wrist in order to get to the touchpad, as the touchpad will always be within reach of your left or right hand while you type. Both touchpads support multitouch gestures and you can use either the left or right touchpad to navigate the notebook's Full HD screen. 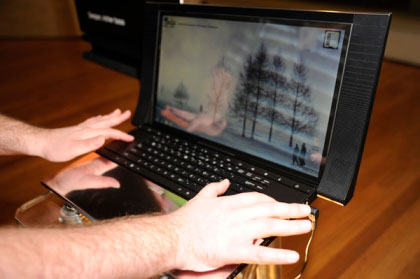 Touchpads are placed either side of the NX90JQ's keyboard — they'll take time to get used to.

Using either touchpad takes a lot of getting used to. We found ourselves constantly reverting back to touching the middle of the palm rest, but there is no touchpad there. Without a touchpad, the palm rest area is huge. ASUS representatives said the new touchpads could be used in conjunction with future applications, but they were mum on the details. At the moment an application called Rotation Desktop works with both touchpads: it's a media application from which you can select music and videos to play. It will be installed in release models of the NX90, but it wasn't available on the test machines we saw.

With an 18.4in screen plus the speakers either side of it, it's not the type of notebook that's easy to leave the home with — and its battery life won't be long enough anyway. It's definitely a stay-at-home notebook and its reflective panels and very good audio performance make it a great media centre machine through which you can play all your video and music.