Australia's third-largest Internet service provider (ISP), iiNet, has struck a deal with FetchTV to distribute an IPTV service to its customers. The service costs $19.95 and comes in the form of a set-top box that can be purchased outright for $399 or rented for a total service cost of $29.95 per month. Up to 95 per cent of iiNet's Internet plans are eligible to have the service added and bundle options will be provided in the future. We had a brief look at the service at FetchTV's office and came away impressed by the ease of use of the set-top box, as well as the quality of the content that's on offer. It looks to be a great option for anyone who has ever wanted pay TV but balked at the cost, and it could also end up being a godsend for residents who live in apartment buildings that don't allow pay TV services to be installed.

The set-top box is programmed to receive new TV shows and movies from FetchTV. Programs are downloaded automatically and stored on the set-top box's 1TB hard drive. iiNet uses multicast technology to push all the data to its customers' set-top boxes, with the end goal being that you won't have to wait for programs to buffer. The interface on the set-top box is very easy to navigate. The list of channels is at the top. After you select a channel, you will be able to see the shows on offer; then all you have to do is click on the show you want to watch. 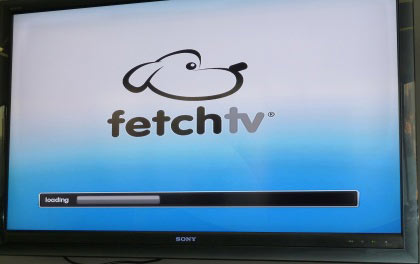 The service includes shows such as Chuck and Big Bang Theory.

The IPTV service includes popular TV channels such as BBC World News, National Geographic, MTV and CNBC, all of which are delivered to the set-top box in a linear fashion. What this means is that episodes from these channels will be streamed to the set-top box via a guaranteed QoS connection.

The programs that come over FetchTV's IPTV service use the MPEG4 codec, and they looked great on the big-screen in the company's office. Some programs will even be 1080p, which will really let you show off what your expensive HDTV can do.

In addition to the linear delivery, some channels will be 'on-command' so that you can pick and choose which episodes you want to see and then download them. The 'on-command' channels include the documentary channels Profiles and Chronicles, which are otherwise known as The Biography Channel and the History Channel, respectively. The names have been changed as Foxtel is the only provider in Australia that can use them.

Movies will also form a big part of the FetchTV service. The service includes 30 movies, which can be found in the Movie Box section of the set-top box's menu. These are pushed from FetchTV over iiNet's network and stored on the set-top box's 1TB hard drive (which is empty when you switch on the set-top box for the first time) so that you can view them instantaneously at your convenience. You can watch these movies however many times you want, but they do have an expiration date, which is clearly shown on the movie selection screen. This is because up to seven new movies are added per week, which means that some movies will have to be purged from the list. 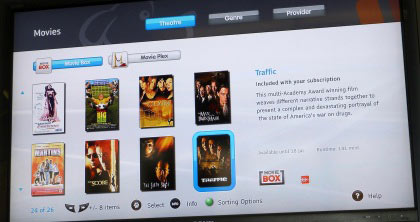 You'll be able to choose from 30 movies at any given time.

You can opt to pay for new release movies via the Movie Plex section in the set-top box's menu. Movies from many of the major studios will be offered. This pay-per-view service will require you to put in a PIN before you can purchase any movie, and each purchase will have a lifespan of 48 hours. The purchase request goes to FetchTV, which then sends it to iiNet. The ISP makes sure the customer is good for it (i.e. not in arrears on their bill), and if all goes well it will then appear on the customer's iiNet bill. In the example we saw, one movie cost $3.95. Purchased movies will still be on your hard drive after 48 hours, but they will be locked. You'll have to repurchase the movie if you didn't get around to watching it during the rental period. iiNet and FetchTV are attempting to recreate the movie renting experience with this service, as all new release movies will be pushed to the set-top box so that if you decide to purchase a viewing, you will be able to view it instantaneously, rather than have to wait for it to buffer.

The FetchTV set-top box has three digital tuners inside it, allowing you to record up to two free-to-air channels while simultaneously watching a third. Channel changes take about two seconds and going from IPTV to free-to-air TV is seamless. You can tell which channel is which by the icon next to it: IPTV channels will have a cable icon, while free-to-air will have an antenna icon. While the free-to-air channels are delivered over the air, the technology is there for them to also be delivered through the FetchTV service in future, which could be a boon for those who have a fast Internet connection but a poor digital TV signal.