"The core essence of what Postal's about is tapping into everyday annoyances that people can relate to and finding ways to ramp them up," says Wik.

Most of the tasks on your "to-do list" start out mundane, but rapidly escalate into full-blown disasters. For instance, the very first objective in the game is to purchase milk from a convenience store. If you choose to not pay for the milk, the cashier will pull an assault rifle out from behind the register and try to murder you. 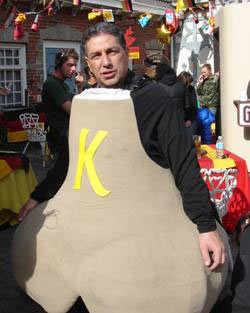 Vince Desi on the set of Uwe Boll's Postal movie in his Krotchy costume.

Later missions are more intentionally absurd than violent, such as one later on in the game where you need to visit the mall to get Gary Coleman's autograph. The team notes that they had a close personal relationship with Coleman, who lent both his likeness and voice to Postal 2 and even traveled with Running with Scissors to trade shows to promote the game.

Mike Jaret, producer on the Postal series, admits that Coleman's recent and sudden death hit him hard. "I personally spent a lot of time with Gary and his death hit pretty close to home," he says. "We used to take him to E3 every year to walk the show floor and sign autographs. One year huge crowds of people formed around Gary to the point where we were threatened with being removed from the show and banned for life. A lot of good memories with Gary and it's a sad day that he's gone."

"Life threw Gary endless curveballs made out of lemons," adds Wik. "He was really chronically unhappy and I think he's in a better, happier place now and seven feet tall."

Cameos, ranging from the strange to the controversial, have become somewhat of a tradition for the Postal games. In addition to Gary Coleman, al-Qaeda terrorist leader Osama Bin Laden makes an appearance in Postal 2 as an enemy. The player can also enable a cheat code by typing "Osama" into a command prompt, which transforms every non-playable character in the game into the FBI's most wanted criminal.

Bin Laden's appearance in Postal 2 resulted in countries like Australia and New Zealand banning the game. New Zealand's Office of Film and Literature Classification (OFLC), a government censorship body, banned the game entirely from the country for its treatment of militant Islamists and other groups. In a report submitted to the secretary of internal affairs, they stated that Postal 2 features "coarse political observations with its depictions of suicidal Arab terrorists engaged in warfare against 'infidel' Catholics." The OFLC's chief censor Bill Hastings issued an official document stating that "anyone who possesses the game is liable to be imprisoned for up to five years. Anyone who supplies, distributes, exhibits, displays or advertises Postal 2 could be imprisoned for up to 10 years or fined $20,000."

Postal 3, which is currently in development, includes Ecotologists -- who the team describes as a "zesty blend of PETA and Scientology." -- as well as German filmmaker Uwe Boll, who directed the 2007 movie adaptation of Postal loosely based on the events in Postal 2. The film holds a 22% review average on Metacritic, with New York Times' Peter Nathan Lee calling it "infantile, irreverent, and boorish to the max," as well as an example of "lousy filmmaking." A number of critics cited the film's opening sequence as tasteless, in which a window washer on one of the World Trade Center towers dies a comical death after colliding with a hijacked plane during the terrorist attacks on September 11, 2001.

While it's not difficult to see why someone could have an adverse reaction to some of the content in the Postal games, the contentious subject matter is, however, always presented in a tongue-in-cheek fashion. Still, the games are often reviled by critics, politicians, activists, and the Federal Government as a ferocious form of entertainment.

One particularly vehement Postal 2 review by Robert Coffey in the July 2003 issue of Computer Gaming World awarded the game the magazine's first ever "zero," stating that "Until someone boxes up syphilis and tries to sell it at retail, Postal 2 is the worst product ever foisted upon its consumers." Portions of Coffey's review were later reprinted on the box art of the Postal Fudge Pack, which includes both Postal and Postal 2 along with the various expansions packs available for each.

"After the first Postal game released, we had phone calls from F.B.I. agents and even the United States Treasury Department," says Desi. "Legal notices from the U.S. Post Office and the Federal Government also showed up at our doorstep. Then Senator Joe Lieberman blasted us with this list of things in our culture that he deemed 'bad.'" 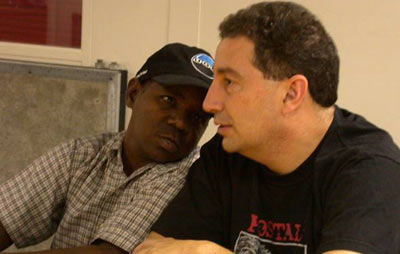 Vince Desi with the late Gary Coleman, who supplied both his voice and likeness for a character featured in Postal 2.

In a statement made before the Governmental Affairs Committee on November 6, 1997, Senator Joseph Lieberman discussed "our broken culture and the risk it presents to our children and our country." Lieberman identified Postal -- along with other things in American culture that celebrate "the murder of police, gang rape, and sexual perversity" -- as something that "extert[s] an extremely powerful hold on our culture and our children in particular, [that exhibits] little sense of responsibility for the harmful values [it's] purveying."

Legal threats and angry phone calls aren't the only things Running with Scissors' staff has had to deal with at their office in Tucson. Desi says that out of the thousands of pieces of mail they get, there's one package he'll never forget.

One morning a box arrived at their office. At first, Desi thought nothing of the package. But Steve Wik warned his boss that perhaps they should take some precautions before opening the suspicious-looking package.

"After Steve warned me, I thought 'let me see if there's someone around the office that I want to fire and maybe I can get them to open the box," jokes Desi.

After cutting through the packaging tape and folding back its cardboard flaps, he got a surprise: An official postal worker's hat rigged onto a spring mechanism leapt out of the open package, startling Desi. A bullet hole, surrounded by fake blood splatters, perforated the hat.

At the time, he couldn't believe that someone would go to the trouble of constructing what he now calls "a pseudo bomb-like device." "I thought, 'okay, this is obviously one pissed off Postal worker," says Desi. "After that, I let the secretary open up everything."

With Lieberman leading the smear campaign against Postal and Running with Scissors, and interesting things coming in the mail, the negative attention quickly snowballed. 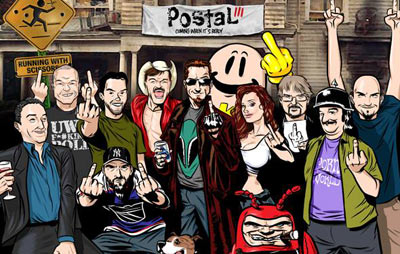 Caricatures of the Running with Scissors staff, filmmaker Uwe Boll, and characters from the Postal series.

"The heat became so heavy in Washington D.C. that Panasonic's Ripcord Games (Postal's publisher) pulled the plug despite the fact that the game sold well," says Desi. "This started the whole blacklisting of Postal. We didn't have the support the original Grand Theft Auto got when it first came out."

Desi insists that Postal was singled out and suggests that other equally violent video games are not held to the same standards. "Look at the Grand Theft Auto series. For what it's worth, you have to do a lot of killing to progress," says Desi. "We never really took that approach. Unfortunately, we've been the scapegoat for the industry that's easy to pigeonhole as being the most extreme, violent game out there."

He points out that there's one big difference between the carnage in Postal and what you'll find in other games. "The laughter is what separates us from any video games that involve strong levels of violence," says Desi. "The bottom line is: there aren't many games that portray violence in a humorous manner."

"In our games, the violence is so over-the-top, you'd have to be a moron to think that it was somehow being represented in even a pseudo-dramatic fashion."

When asked why he believes the Postal games tend to receive harsher criticism than other franchises, Desi claims a lot of it has to do with money.

"I have my opinions about why we were attacked by mainstream media and GTA wasn't to the same degree. For one, we didn't have the deep pockets of GT Interactive, who was the publisher of the series before it became Take 2. A lot of paying off goes along the way."

While Desi understands why Postal's humor and subject matter may not be for everyone, he reminds us that his games are an escape from real life and shouldn't be taken seriously.

"If there was one thing I wish would've happened differently over the entire Running with Scissors and Postal history," admits Desi "is that it's taken a really long time -- and is still in the process of -- for people to realize that Postal is about fantasy violence and what we call 'mature humor."

"We never intended it to be a serial, dramatic game."