While Vince Desi and his team have plenty of detractors, not everyone is quick to pick up pitch forks and torches at the mere mention of the name Postal. Desi points out that the games have a loyal, hardcore following of fans scattered across the globe. Publications like Maxim praised Postal 2 for its profane, but amusing gameplay with reviewer Scott Steinberg giving it 4 out of 5 stars, urging readers to "enjoy it for all the wrong reasons." PC gamer also gave Postal 2 a positive review in the June 2003 issue of the magazine. The reviewer scored it a 79 (out of 100) and admitted "[E]ven though I should be disgusted by the potty humor and derogatory caricatures, I had a blast playing through it." 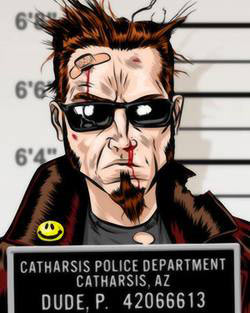 Desi's even received praise from a psychiatrist who prescribed Postal to some of his patients as a cathartic form of treatment. "I'll never forget the Christmas when the original Postal came out," says Desi. "An older psychiatrist contacted me because he was purchasing multiple copies of Postal. He was wondering if he could get a discount since he was getting a dozen copies. The psychiatrist thought it would help them release their inner emotions -- but at the same time -- be able to laugh about it."

When it comes to Postal, Desi ultimately doesn't care whether people embrace its irreverent nature or avoid it like the plague as much as he cares about people who make up blatant lies about his games.

While nothing is sacred when it comes to Postal's biting humor, there's an internal rule at Running with Scissors that they never involve children. Desi explains that their games, after all, are clearly for mature audiences.

"The Wall Street Journal put us on the front cover after the first Postal released," says Desi. "I was so pissed off because the friggin moron journalist wrote this whole chunk about killing children in the game.

"I got the author on the phone," continues Desi, "and he admitted that he not only didn't know whether or not that was in the game -- he never even played the game in the first place. He didn't even have a f****** copy of the game.

Desi notes that lazy writers aren't always to blame. Sometimes, it's the person the writer reports to who perpetuates the bad reputation swirling around anything Postal-related. "Journalists yield a lot of power," states Desi. "I'll give you an example of something that happened after Postal 2 came out. A review site was going to give it an 8.5. A day later we got a call from the reviewer who said 'Look, I'm really sorry but my editor won't allow me to give you a rating more than a 2... do you want me to scratch the whole story?' I told him 'No, go ahead and run it.'"

"I've always told that story because not only was the truth not being told, but with anything in life, it's not the act itself that matters as much as the result of that act. When editors, especially gaming press, elect to arbitrarily position us in a certain way, or not take us seriously, or not give us the credit we deserve, what they're really doing is not doing justice to the video game industry and video game fans."

Discussing journalism practices, Desi makes the comparison to a fireman who races to put out a raging inferno, only to extinguish the fire in one room. "Too often the game review becomes a kind of platform for the writer to show the moral fiber they have or to make a political stance," says Desi.

Postal producer Mike Jaret notes that this wasn't the first time they've been treated unfairly by gaming media. "IGN was one of the first websites to post a review of Postal 2,"says Jaret. "Their review went up two hours after their package was delivered. You can read the review yourself -- it was very obvious the guy (Ivan Sulic) didn't even play it. The reviewer played the game and wrote the entire story in two hours."

"I'm not saying you should like every game," continues Jaret. "There're a lot of terrible games out there. But if you're going to hate something right out of the box, you shouldn't be reviewing games. A lot of work goes into games and everybody should be given their fair trial."

Former IGN writer and now head of PR at Cryptic Studios, Ivan Sulic, remembers reviewing Postal 2 a bit differently. "Though it was seven years ago, I distinctly recall playing Postal 2 review code for two days and logging in somewhere around 20 or 30 hours," says Sulic. "Despite the tone of my review, I'd never shortchange a title out of laziness. I took every game -- good and bad -- quite seriously. I played them all and I played them thoroughly... which is probably why I quit and joined development. There's only so much Trigger Man a sane fellow can take, you know? Incidentally, a 5.5 on IGN is described as 'Mediocre', a rating I believed was appropriate."

In spite of all the negative attention that tends to swarm around anything with "Postal" affixed to it, Vince Desi reaffirms that it doesn't bother him that some people just don't get his games. His views for what a video game should do first and foremost -- to entertain -- remains undiluted by the people who bash his work.

"It's always funny when I hear developers talking about 'the science of game design,'" says Desi. "This is a business like any other business, but I wish more people would realize that our business is, first and foremost, supposed to be delivering a product that makes people have fun."

"To me, that's the hardest part about game design. Anybody can make a football game or a baseball game. Let's face it: too many games are merely an enhancement of the previous generation and that's all they are. There's very little that's original and I find that horribly boring. I admire all the different kinds of creative direction in games, however, to me a video game in the classic sense is something that's easy to play, fast-paced, and always fun. Games should never be like a biblical study in seminary school, which some games are."

While adamant about how Running with Scissors' primary concern has always been about delivering a good time, Desi acknowledges that the Postal games are anything but perfect.