The mainstream availability of 3D TV sets marks a big step forward towards bringing the cinema experience into living rooms. Two of the main players in the Australian 3D TV market are Panasonic with its VT20 plasma TVs and Samsung with the Series 7 LED models.

Like other top-end plasma and LED televisions, both TVs deliver great 2D image quality — but which produces the best 3D effect, and which model is best overall? 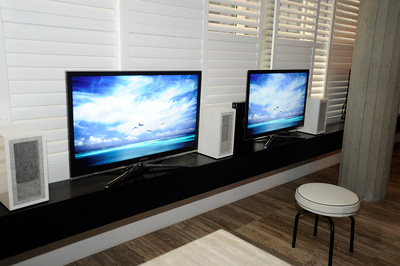 When it comes to design, we think the Samsung 3D TV wins out by a wide margin — it is thinner, it has a more attractive and slimmer bezel, and it can be mounted almost flush to a wall thanks to an innovative Samsung-designed mount. Even if you're not wall-mounting it, it wins out thanks to its very stylishly designed swivelling base.

The Panasonic TH-P50VT20A has a rather generic bezel design. That's not to say it's unattractive. It's built with high quality materials and has a glossy finish, but we think it would have benefited from a more striking design. It's also thicker than the Samsung television and doesn't have a slim wall-mounting option.

Although it's made significant strides over the past few years, plasma television technology is still more power-hungry than LED-backlit LCD TVs. With a four-star energy rating the 50in Panasonic TH-P50VT20A is no slouch when it comes to efficiency: the company puts the TV's power consumption at 192 Watts during regular home usage. To put this into perspective, this is less than a 46in Sony HX700 LCD TV.

However, LED-backlit LCD televisions are the current winners in the power consumption arena. Since there's no 50in model to directly compare, we looked at the stated power consumption figures of both the 46in and 55in Samsung Series 7 LED TV models. The 46in consumes a maximum of 170W during operation, and the 55in consumes only 180W. So, even if you buy the 5in larger Samsung UA55C7000, it will still consume less power than Panasonic's 50in TH-P50VT20A plasma. It gains a whopping six-star energy rating.

Both televisions are exceptionally good at displaying regular television and 2D Blu-ray video content. They can both display video with an impressive level of contrast, with deep black levels and plenty of detail in bright areas. Panasonic's TH-P50VT20A edges out Samsung's LED model though, with superior viewing angles as well as superior detail in dark areas of the screen. It is a close call, though — unless you see the two side by side, it's hard to quantify the difference.

The kind of 3D effect you can achieve with these TVs depends in part on the content you're watching: films that have been shot with 3D cameras will look more impressive and offer more realistic depth of field than films that have been converted from 2D after filming. This is one of the reasons why the four currently available 3D Blu-ray movies (Monsters vs. Aliens, Ice Age 3, Coraline, and Cloudy with a Chance of Meatballs) are all animated — computer-generated movies are easier to recreate in the 3D format than live-action films.

For the most part, Panasonic and Samsung's 3D televisions both do a good job of creating a 3D effect. We only had a limited amount of content to try on both panels, with some FIFA World Cup and State of Origin 3D sports footage from the 3D trial digital television channel our main source. We also compared Ice Age 3 in 3D on both sets.

In a few instances we did notice occasional crosstalk when viewing footage on the Samsung TV, with the edges of 3D objects exhibiting ghosted and indistinct edges once brightness was raised above its standard setting. Tilting your head to the side while wearing the 3D glasses reduces the Samsung Series 7's screen perceived brightness, and eventually leads to blackout — this is due to the polarisation from the glasses interfering with the polarised LCD screen. 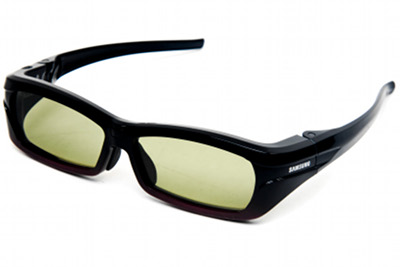 This problem does not exist on the Panasonic TV, with brightness remaining consistent even if you tilt your head to the side. Panasonic's plasma 3D television also has better viewing angles, with no loss of contrast or brightness when watching from off to the sides. Images on the Panasonic TH-P50VT20A were free of ghosting or crosstalk at every brightness level, so it is a clear winner in these tests. If 3D video performance is your main concern, the Panasonic plasma is the superior choice.

Samsung does have an extra advantage, however: the Series 7 sets are able to interpolate normal television and movie footage into 3D. This adds a small amount of extra depth to regular television or Blu-ray video, allowing you to get more usage out of your 3D glasses. 3D glasses are also cheaper if you're buying a Samsung, with pairs for adults and children costing $129 and $99 respectively. Panasonic's one-size-fits-all glasses are $199 each.

While the Samsung 3D TV comes with two pairs of glasses, the Panasonic only comes with one.

IPTV (Internet Protocol Television) is a term that refers to receiving video on your television that's streamed directly from a broadband network. Both Samsung and Panasonic's top-end televisions have IPTV features that allow viewers to access the Internet without leaving the comfort of the couch.

Both sets have access to Twitter and YouTube, as well as support for Skype video-calling through optional $199 TV-mounted webcams. BigPond Movies on demand will be available on Samsung's TVs in the future, while Panasonic sets will gain access to the Yahoo!7 Plus7 content library. Both sets are full of features in this area, so we wouldn't pick one over the other.

It's a close call when it comes to choosing between these two TVs. In our opinion, Samsung has the edge when it comes to design and power consumption, while Panasonic steals the crown when it comes to outright image excellence. If we were pressed we'd probably buy the Panasonic plasma for better movie-watching, but we'd spend sleepless nights pining for the Samsung's sexy curves and greener electronics. We're waiting keenly to test Samsung's Series 7 and Series 8 plasmas to see if they deliver the best of both worlds.