A friend once told me girl gamers are like unicorns: a mythical creature highly coveted by man.

While I found it highly offensive to be compared to a glorified horse that doesn’t even exist, I was stumped for a comeback when he asked me how many female gaming friends I have (and he didn’t mean the type who enjoys playing Viva Pinata.)

I had to admit it: I didn't have many that forayed beyond the boundaries of the casual genre. The fact is, female gamers are few and far between — well, the ones that are into something more than just Farmville or the odd Wii party game anyway. So I guess I shouldn’t have been surprised how much attention GameCrush has received. GameCrush is an online service that offers to connect paying customers with bona fide gamer girls, known simply as PlayDates (do you see what they did there?).

GameCrush is essentially an online dating service that substitutes gaming for dating — you find a girl's profile, request a match-up, and then pay her to play video games with you. It's a wonder that nobody thought of this formula before.

The private beta launched in March and so many people flocked to check out GameCrush that its Web site crashed. 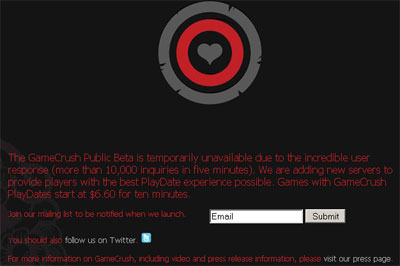 Down for the count: Gamecrush's public beta, earlier this year

The service involves voice chat as well as live video streaming and is currently available over Xbox Live and PC. Games available so far are Call of Duty: Modern Warfare 2, Gears of War 2, Grand Theft Auto IV and Halo 3. Sessions last for up to 10 minutes and it will set you back around $US8.25 to partake of the service.

GameCrush has been dismissed by some as an interactive sex line for naïve gamers, but perhaps there is a genuine demand for such a service. Maybe people want to pay to chat with girls who are pretty and know how to navigate through Gears of War 2. (I hear there are male PlayDates on offer as well. Hmmm.)

To gain a bit more insight into GameCrush, I had a chat with co-founder Eric Strasser and two of the PlayDates, Gina "SuperVillain" and Katie "Joybutton". Here's what they had to say...

How did you come up with the concept of GameCrush?

Eric Strasser: GameCrush was originally conceived two years ago when we [Strasser, David Good and Anees Iqbal] were sitting around talking about the changes that were taking place online, and how online is becoming more like the real world. We saw the transition of people’s relationships online and the interactions people were having on Facebook, which was — two years ago — just starting to get big.

When I say female gamer, people instantly have images of either someone who is completely nerdy or, in some cases, the rock 'n' roll Suicide Girls or maybe the pro-gamer Fragdoll girls.

But there was nobody out there really putting the two together and thinking, "You know, there is a community of gamers out there that is completely ignored and you have a social network that is just ripe for development". Really, the only way we could see it working this way is to put some type of monetisation plan in place and that’s what we did.

The three of us [the founders] are friends. We all come from different backgrounds that work really well. Dave was at GameSpot — a big time gamer. I was more with the social networking and media and Anees comes from number of start-ups.

I’m sure a lot of people out there are slapping themselves on the head and thinking, "Why didn’t I think of that?"

Yeah, it was obvious to us and we’re surprised nobody else thought of it. I think it will take an even more exciting turn when we launch the public beta in the next few weeks.

We have taken a lot of what we learnt since we launched the private beta site to make the site even better. We listened to PlayDates and players, which now number in the thousands, and created a site that is very unique. 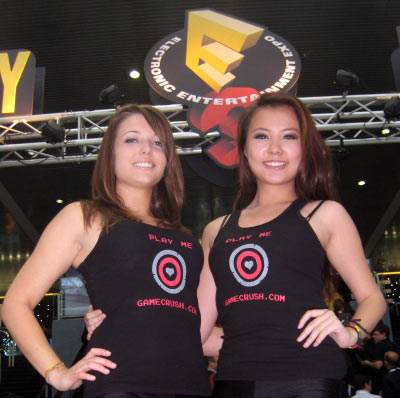 So although I think there is a question of why hadn’t someone thought of this, I think now we have developed something that is a combination of, really, the ideas and feedback we have gotten from thousands of users.

How many people are registered so far?

We have around 5000 registered PlayDates and over 2000 players. As far as active users, it varies quite a bit.

So how does one become a PlayDate?

SuperVillain (SV): I read a gaming blog and saw something about Gamecrush.com; basically as a community of girls playing games. I’d never seen anything like this.

I thought it was the best thing for me, because it’s very rare for me to run into another female gamer in the real world who actually knows what she’s talking about. So I checked out the site and I pretty much started joining within two minutes of checking it out.

It just took off from there and I never looked back.

What is involved in the selection process?

SV: Basically, anyone can be a PlayDate. You can be a guy or girl of whatever age [as long as you're over 18]. You can sign up and upload a picture. You have to answer questions, like, what kinds of games you like and information about yourself.

The thing I like about it is there are no huge criteria of what you have to be in order to be a part of this site. This is a site for anyone who basically loves games and wants to meet other people who play as well.

Anybody can sign up to be a PlayDate? So you don’t have to be a certain level of "hotness" to join?

Eric: Let’s have Katy (Joybutton) answer that one.

Joybutton (JB): Anyone can sign up. It doesn’t matter how you look. I’ve seen all kinds of people playing games and having chat time with players.

But I would say maybe if you’re a little bit more attractive, you have better chances, especially with games that require face time like the casual online games. But for the most part, they really just care that you are a female gamer.

Eric: What people find attractive in the real world and the gaming environment is very different.

I know who gets paid and who makes the most in the gaming. You’d be surprised two of our biggest performers are not what I would consider [drop dead gorgeous] in the physical world.

So someone might really know their way around a specific game; that is what makes them attractive and people are playing them for that

JB: There is actually no standard to what you look like. Obviously everybody has their own taste. And we not only have female PlayDates we have male PlayDates also, so that really stresses the fact anyone can join.