How do these two new cards compare to AMD's nearest kin--the less expensive Radeon HD 5770 (roughly $149) and the more expensive Radeon HD 5850 (around $279)? To find out exactly how much bang for the buck these new cards offer, we averaged the benchmark results for all of our real-world game tests and then divided by the price to arrive at a metric we call Dollars per Frames per Second. On this chart, lower numbers are better: The less you have to spend, the better. For this computation we used AMD's suggested prices of $179 for the Radeon HD 6850 and $239 for the Radeon HD 6870. Prices from individual brands may vary a bit, especially for factory-overclocked models, but they should fall roughly in line.

It appears that the Radeon HD 6850 provides exceptional bang for the buck, even surpassing the value-oriented Radeon HD 5770. At $239, the Radeon HD 6870 is a far better deal than the Radeon HD 5850 (whose price just dropped), offering similar or superior performance at a lower price. 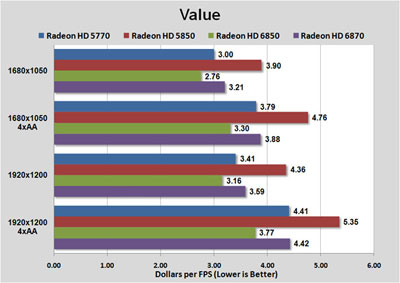 AMD says that it worked hard to optimize power utilization on these new cards, delivering even lower idle power than the already-excellent Radeon HD 5850 and 5870. The Radeon HD 6850 requires only a single six-pin PCIe power connector, while the 6870 requires two. This is an improvement over the 5800 series, but the cards are going to have a hard time matching the low power draw of the Radeon HD 5770. The numbers on the chart below represent total system power as measured at the plug, not just graphics board power. With a high-end CPU like our Core i7 980X, you can expect high overall power numbers.

It's unreasonable to expect these new cards to match the power consumption of the Radeon HD 5770, which has a much smaller GPU and a 128-bit memory interface, but the Radeon 6800 series impressed us by using about the same amount of power at idle and 20 to 50 watts more under load.

Factoring in the performance of these cards, we can get an idea of how power-efficient they are, not just how much raw power they use. By dividing the average frames per second of all our game tests by the power use under load from the previous chart, we arrive at a measure of Watts per Frames per Second. Here again, lower numbers are better. 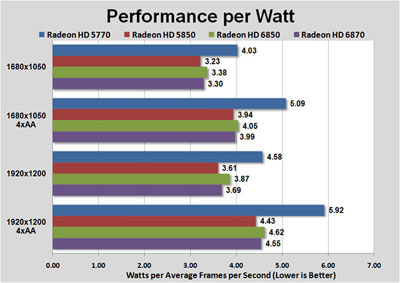