The video game console controller has seen countless iterations and evolutions, but perhaps none more notable or influential than the Nintendo Entertainment Console's iconic grey, black, and red controller.

Released in 1983 in Japan and in the U.S. two years later, the Nintendo Entertainment System (NES) accomplished a great number of things in its illustrious lifetime: It established Nintendo as a major force in the games industry, it helped reinvigorate the ailing market after the great crash of 1982, and it exposed an entire generation to the joy of video games. But while it's cultural and fiscal impact has been thoroughly documented, little attention has been paid to one of its most important contributions to gaming: the seemingly innocuous controller that a legion of gamers held in their furtive grasps.

While it has been supplanted by technology featuring superior ergonomics and functionality, the original NES controller deserves to be remembered as a transformative piece of technology whose impact is still felt today. How did a simple piece of plastic measuring only 12.2 cm by 5.25 cm change video games forever? By establishing a new "language" that defined the way we interact with our video games.

It might sound disingenuous to talk about gaming as a language, but it has all the earmarks of one: there is a defined and shared vocabulary that gamers adhere to, and an established grammar that governs how most games work. The language has evolved and changed over the years but the alphabet was initiated in the golden 8-bit era of the NES. That system's simple controller, which consists of the iconic cross-shaped directional pad (borrowed and refined from earlier precursors found on the Intellivision console, Microvision handheld, and Nintendo's own Game and Watch handhelds) and four face buttons, is gaming's Rosetta Stone -- the defining document that serves as the basis of our collective lexicon.

Early home consoles that predate the NES featured unwieldy and overly complicated controllers that weren't known for their form or function. The earliest consoles were dedicated solely to Pong and its many variants, and therefore featured a lone knob for controlling the paddles. Later systems, like the ColecoVision, had bulky controllers with unnecessary features like a numerical keypad; its two buttons were also embedded on the side of the unit, necessitating an awkward "pinch claw" grip where your hand wrapped around the controller's undercarriage. The most popular console of that era, the Atari 2600, had a controller that paired an upright joystick with a single button; while its simplicity was admirable, the design hampered the overall complexity of game experiences possible on that platform. In terms of the language metaphor, these controllers could be considered the gaming equivalent of cave drawings, which were our ancestors' first flirtation with communicating shared ideas; in that context, the NES controller is the first actual written document and it represents the point in time when the defining characteristics of our collective language became fixed.

This was due in large part to the controller's intuitive design. The rectangular shape was a vast improvement in terms of overall comfort and ergonomics; the placement of the face buttons, which put the majority of the stress on your thumbs, was also important -- there is a reason why those two opposing digits are constantly referenced as one of the defining evolutionary advantages that humans have over other animals. Go to your game collection and pick up one of the many "modern-era" controllers you no doubt own (the Xbox 360 controller and Sony's DualShock are the most likely candidates). Now, hold it the way you would when you're playing a game; you probably don't notice it because it's autonomic-like breathing and blinking -- but look at your hands and how they're positioned. The controller is cradled in your palm and your thumbs are resting on the analog sticks, ready to manipulate the majority of the buttons available to you; this is the set starting position that all console gamers now live by, and it was Nintendo's revolutionary approach to designing its controller that firmly cemented this under-appreciated aspect of gaming culture in stone. 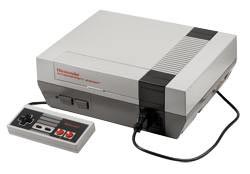 The NES controller was also far more functional, and it allowed developers to design more sophisticated gaming experiences; this would lead to a generational leap forward in both quality and depth. While improved technology and better development techniques deserve a majority of the credit, the increased functionality offered by the controller's design would also have a game-changing effect (excuse the pun) on game design by endowing developers with greater flexibility.

This is something modern-era gamers may scoff at, but the NES controller was a relatively sophisticated piece of technology for the time. The four face buttons, along with the NES' beefier hardware, made it possible for designers to implement systems that were far more complex than those found on earlier consoles. For instance, Square Enix's original Final Fantasy and Nintendo's own The Legend of Zelda were able to offer intricate RPG experiences complete with an inventory and character leveling. (Old-school PC gamers who were playing titles like Rogue and Ultima around this time are no doubt rolling your eyes, but such gameplay mechanics would have been impossible or unwieldy on a relatively simplistic home console had the controller and user interface not been up to snuff.) The "Select" and "Start" buttons were especially key, allowing game designers to implement sub-menus where new abilities and items could be managed, and these layers of added complexity made games like the original Metal Gear and Mega Man far more compelling.

The NES would also have a noticeable effect on the overall culture of games, and certain "phrases" would become so pervasive that they entered the mainstream consciousness, the way idiomatic slang can infiltrate the popular lexicon (remember that, at one point in time, the word "cool" was used solely to describe temperature). The most obvious and pervasive example is the "Konami code," something even most non-gamers can recite from memory. The controller itself would also become a cultural symbol, used as the inspiration for a wide-ranging series of pop culture ephemera -- like belt buckles, earrings, and hand soap.