Even if you've never heard of the band Freezepop, there's a good chance you've jammed along to some of their tunes before — the Boston-based synthpop quartet has pumped out tracks for nearly every music/rhythm game going.

FreQuency, Amplitude, Karaoke Revolution, Dance Dance Revolution, Guitar Hero and Rock Band have all received the Freezepop treatment. (Hell, throw Parapa the Rappa into the mix and you’ve almost got a definitive set!)

Freezepop (named after the ice-lolly snack) has been a fixture of both the technopop and gaming scenes for over a decade now, starting with The Orange EP and Frequency, respectively.

Their music has an old school electronica vibe that sits right at home with video game culture (sample track title: Robotron 2000). Even the departure of original founder Kasson Crooker — now a senior producer at Harmonix — has failed to slow Freezepop down, with the band set to release its fourth full-length album next month.

This week, we caught up with original band members Liz Enthusiasm (lead vocals) and Sean T. Drinkwater (vocals, synths) to chat about the band and their experiences in the gaming bizz. 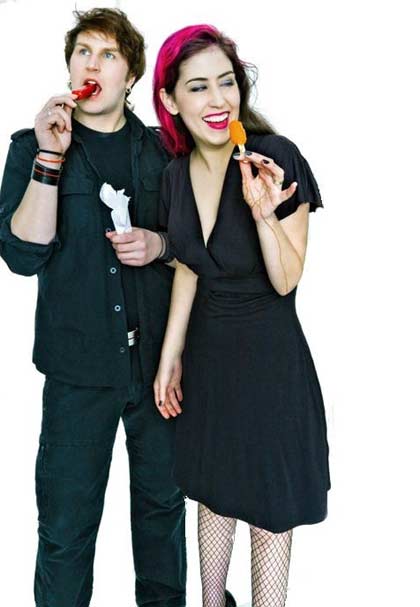 Sean T. Drinkwater and Liz Enthusiasm, living up to their band's namesake

FreezePop is arguably the closest thing the games industry has to its own pop band. Does this make you feel honoured or vaguely embarrassed?

Liz: We feel quite lucky about it! It was a weird, unforeseen turn that our musical career took, and it’s been fun for us.

Sean: It's certainly not embarrassing. We were never a band that was going for 'cred' (whatever that means in 2010) in and of itself. It's been amazing to have songs in the laps of millions of kids. We're very grateful.

How did Freezepop initially get involved in the video games industry? Has the association had any kind of influence on your musical style?

Liz: I think the association really came about because of our musical style. The Duke [AKA Kasson Crooker] was working as an audio guy at Harmonix. They needed more songs way back in the Frequency days, and we just fit in really well. 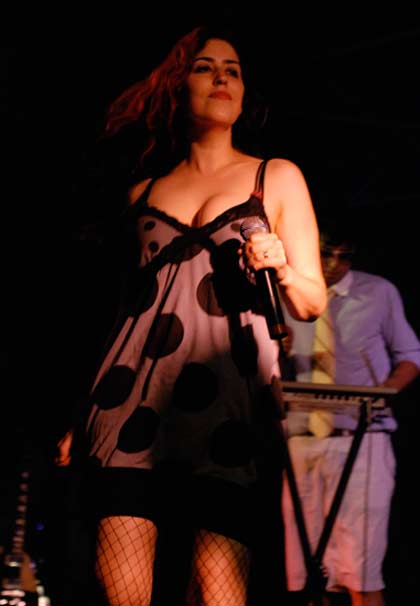 Run us through the typical Freezepop song-writing process (including software/hardware you use): do you start off with a central tone/theme, or are you just messing around with synthesisers?

Sean: Usually these days it's a lyric, title or concept that starts the process. Often times now we'll have programmed a ton of new sounds into some synthesizers as pre-production (if the synths are able to store sounds).

When it comes time to produce a song — which is usually written on piano or acoustic guitar when it comes to chords and melodies — we'll wheel out some of the new sounds and try things out and see what sticks. On our new record [Imaginary Friends], there were actually a lot of new and old analog synthesizers, which was nice as they're very physical and fun to work with.

Favourites right now include the Roland SH-101, the Minimoog Voyager, and the Dave Smith Prophet 08. We also use the Universal Audio UAD platform of software effects plug-ins extensively, and this record would not have sounded the same without them. 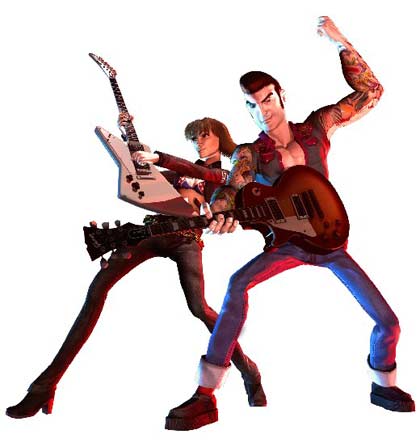 Some of your songs contain lyrics in other languages. What's that all about?

Liz: It started with 'Tenisu no Boifurendo'. I had just taken a semester of Japanese and thought it would be funny/cute to write a song in Japanese, since I was listening to a lot of Japanese music at the time. By the time Parlez-Vous Freezepop came around, I had forgotten most of the Japanese from my class, but I actually can kinda-sorta speak French. (Note: I am aware that the lyrics to these songs are pretty dumb!)

The first few Guitar Hero games contained lots of songs from indie bands (which is arguably how Freezepop got its big break). Do you think the genre has gone too commercial?

Liz: Well, Harmonix has always been supportive of its employees’ bands. But we were definitely in the right place at the right time. Now that these games are huge, it’s next-to-impossible for an unknown band to break into it. Although with the rise of RBN [Rock Band Network] and the ability to self-author your own tracks, it’s not like the door has been shut completely, which is great. 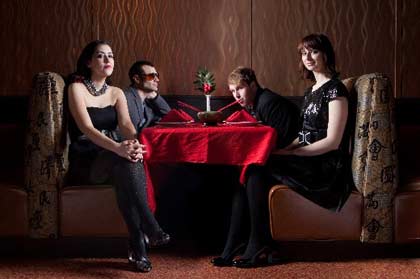 What would you say Freezepop's biggest influences are? (These don't necessarily have to be musical influences.)

Liz: Musically (and stylistically), a lot of classic 80s synthpop: The Human League, Depeche Mode, Duran Duran, Gary Numan — the list goes on and on and on! Also: Travelling. Bright colours. Puppies. Dancing.

Sean: Yeah I would say we always have an eye on what I call 'original synthpop': stuff from the '70s or very early '80s like Kraftwerk, Giorgio Moroder, the original Human League, OMD and Vince Clarke's various projects.

Those are certainly something of a template for us, but we like to make sure we bring something fresh to those ideas, so it stays somewhat current and relevant. Having a female singer and a totally different lyrical standpoint is also helpful in terms of keeping us original-sounding.