By the time you read this, Kinect for Xbox 360 will finally be hitting stores nationwide; some two weeks after its launch in America and Europe. It's been a long wait for Aussie gamers, who've had to sit idly by while the rest of the world flailed its arms and legs about smugly. (Hell, even Oprah Winfrey was rubbing our faces in it.)

Well now it's our turn — but was the wait actually worthwhile? 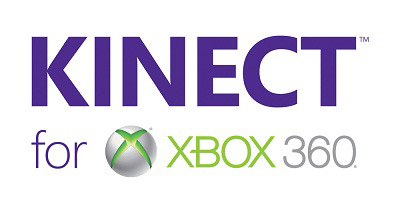 This week, GamePro's Chris Jager and Spandas Lui put the Kinect through its paces (along with their pulse rates) in attempt to find a definitive answer. Below is a transcript of the experience.

Chris: Okay, the Kinect is unboxed and plugged in.

Spandas: Eek! It's moving by itself!

Chris: Look at how it swivels. It kinda looks like the robot's head from Short Circuit.

[The Kinect sensor directs Spandas and Chris to the very back of the room, which is approximately four feet away from the TV. ]

Chris: Hmmm… I don't think we're going to have enough room to play here. One of us is going to get whacked for sure.

Spandas: Because there's no room, or because you're a sore loser?

Chris: What the hell? I never lose! 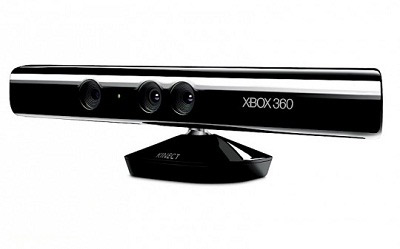 Chris: Bugger this. Let's move the TV to the far side of the room.

Spandas: Bloody hell. I already feel like I've had a workout, and we haven't even started playing yet!

Chris: Note to gamers: you're going to need at least six feet of floor space to play the Kinect with two people.

Chris: That was uncalled for.

Spandas: He is right though: Kinect requires a pretty spacious lounge room — especially in multiplayer. Otherwise accidents are bound to happen.

Chris: It's definitely a bigger space-hog then the Wii. If Microsoft ever releases a four-player game for Kinect, you'll probably need to move into a mansion. 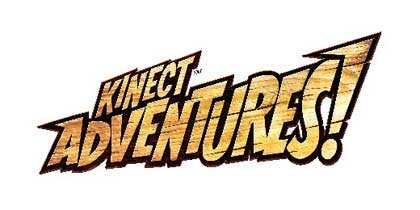 [The first game Chris and Spandas tried out was Kinect Adventures; a party game designed for families and casual gamers. ("Jump, duck and dodge your way through roaring rapids and challenging obstacle courses!") Unfortunately, the troubles began as soon as the title screen loaded…]

Chris: I can’t get the… Wait, where's the cursor? …I can’t start the game since its not detecting my…

Spandas: Oh, there it is. 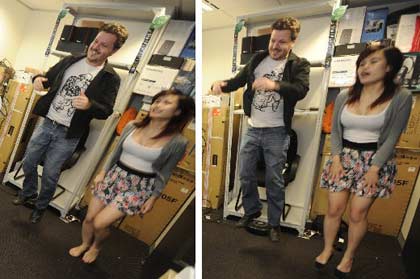 Chris: Y'know, I'm not too sure if kids will have the patience to sit through this process.

Spandas: Ooh, good point. That's like, half the Kinect's audience.

[With calibration complete, the pair tried their hand (and other body parts) at some of Kinect Adventures' minigames. What was meant to be a casual and fun affair erupted into a verbal brawl as frustrations mounted over the lack of teamwork. This reached its peak during the white-water rafting game.] 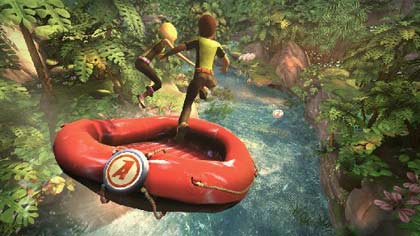 Chris: You’re the one that didn’t sidestep in time!

[The space demanded by the Kinect simply could not be afforded by the test room. The laggy controls were also a continuing issue. Claustrophobia descended upon Spandas, exacerbating the tense atmosphere.]

Spandas: Get out of the way! Sheesh!

Chris:: What?! How about you stop taking up so much room?! Jump higher!

Spandas: …Um. I really should have worn some pants for this! [Note: Throughout testing, Spandas was forced to grip firmly on her skirt's hemline to preserve her modesty.] 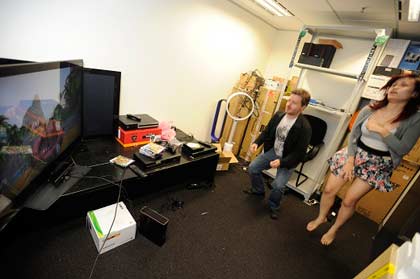 Chris: The Kinect camera has been taking snapshots of us every time you jump, by the way.

[After a prolonged period at failing at the minigames, the two made a wise decision to abort the session before their friendship was irrevocably destroyed.]