Read our detailed previews of the HTC Desire S and the Samsung Galaxy S II, and check out our roundup of the best upcoming smartphones in 2011.

The HTC Desire S has a 3.7in SLCD display with a resolution of 480x800, a 5-megapixel rear camera that doubles as a 720p HD video recorder, a 1.3-megapixel front camera for video calls, and an aluminium "unibody" design that HTC claims makes it stronger than the original Desire.

The Samsung Galaxy S II boasts a large 4.3in Super AMOLED Plus display with a resolution of 800x480, an 8-megapixel rear camera that doubles as a 1080p HD video recorder, and a 2-megapixel front camera for video calls,

So how does the HTC Desire S compare against the Samsung Galaxy S II when it comes to specifications? 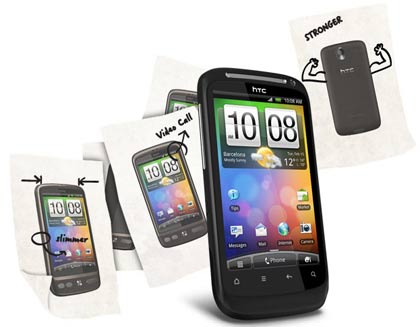 The HTC Desire S uses an aluminium "unibody" casing, which HTC claims makes it lighter yet stronger than the original Desire.

The Samsung Galaxy S II is just 8.49mm thick, making it thinner than the iPhone 4 and likely the thinnest smartphone in the world. The Galaxy S II has an attractive carbon-like finish on its rear battery cover; in our brief hands-on with the phone it felt both well built and extremely light.

We’ve seen HTC’s unibody design in previous Android phones and were left feeling extremely impressed. Although the Galaxy S II is super-thin, a plastic build can’t match an aluminium one, so the Desire S wins in this department — just.