Samsung responded to Sony Ericsson's claims that the XPERIA Arc was the thinnest smartphone in the world by making the Galaxy S II even thinner: It is just 8.49mm thick, making it likely the thinnest smartphone in the world (at least until another competitor trumps it). The Samsung Galaxy S II has an attractive carbon-like finish on its rear battery cover; in our brief hands-on with the phone it felt both well built and extremely light despite being made mainly from plastic.

Samsung deserves credit for managing to make the Galaxy S II so thin, but we can't help but award the winner here to the XPERIA Arc. Its ergonomic design is both attractive to look at and comfortable to hold and use. Although it is slightly thicker than the Galaxy S II, the extra girth is minimal.

The Samsung Galaxy S II is even thinner than the Sony Ericsson XPERIA Arc, measuring just 8.49mm thick, and making it likely the thinnest smartphone in the world.

The Sony Ericsson XPERIA Arc has a 4.2in 'Reality display'; this sits alongside other fancy display names including the iPhone 4's 'Retina display', the Samsung Galaxy S II's Super AMOLED Plus' display and the 'Nova display' of the LG Optimus Black. Sony Ericsson claims the Reality display is brighter and clearer than competing displays. The XPERIA Arc also comes with Sony's Mobile Bravia engine which promises image noise reduction, along with sharpness, colour and contrast enhancement.

The Samsung Galaxy S II on the other hand has a 4.3in Super AMOLED Plus display, making it one of the largest touchscreens on an Android phone in Australia alongside the HTC Desire HD. Samsung's Super AMOLED Plus is a refinement of the original Galaxy S' Super AMOLED technology and promises a clearer and brighter image, as well as better battery life.

We haven't had enough time with the XPERIA Arc to determine the impact of the Mobile Bravia Engine and the 'Reality display', but first impressions were very positive. We know the vibrancy and brightness of the Galaxy S II's Super AMOLED Plus screen is going to be tough to beat; especially if the regular Super AMOLED display of the original Samsung Galaxy S is anything to go by.

The XPERIA Arc includes Sony Ericsson's Timescape application, which first appeared on the XPERIA X10 Android phone. Timescape groups social networking and phone communications into a single, graphically intense interface; each communication event on the phone forms a 3D box that you simply flick your finger up and down the "spine" to scroll through. However, Sony Ericsson has included Timescape as a regular app rather than integrate it into the XPERIA Arc's UI, and it has also dumped its Mediascape integration. This means the XPERIA Arc is unlikely to suffer the same Android software update delays as the XPERIA X10 did, with the company keen to push out the latest Android updates to the handset as soon as possible. 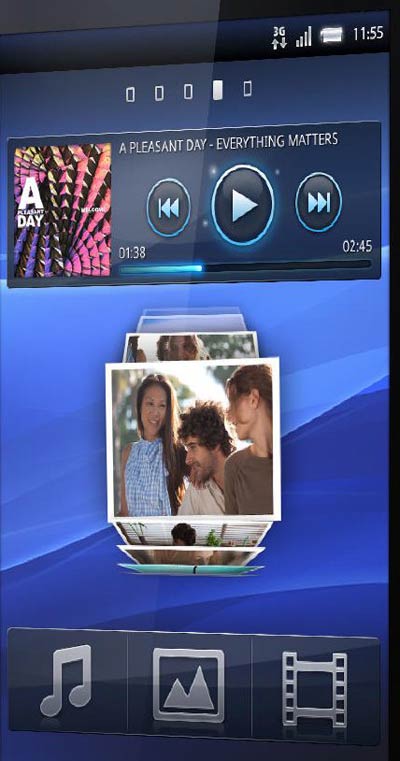 Although both of these smartphones run the Google’s Android 'Gingerbread' operating system, each has a different UI overlay that is intended to enhance the user experience. Samsung's TouchWiz overlay seems a little more involved than Sony Ericsson's but both look appealing in their own way; we particularly like the look of the Sony Ericsson home pages and menu.

The Sony Ericsson XPERIA Arc Android phone comes with an HDMI port, meaning you can connect it directly to a high definition television. Along with DLNA connectivity for wirelessly sharing media content, the XPERIA Arc seems well designed for multimedia sharing. 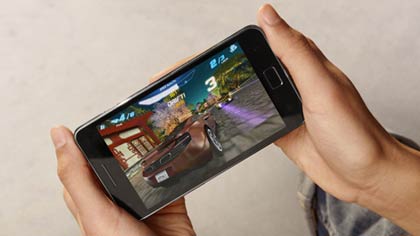 The Samsung Galaxy S II doesn't have a HDMI-out port but comes with something better: a new connection technology called Mobile High-definition Link (MHL). The on-board MHL technology uses the Galaxy S II's standard microUSB port for outputting 1080p HD video and audio via HDMI. You'll need an optional microUSB to HDMI MHL connector to enable this feature, but the beauty of MHL means it can also be used with a USB adapter, meaning the Galaxy S II can utilise USB on-the-go functionality like the Nokia N8.

The Samsung Galaxy S II comes with an integrated Near Field Communications (NFC) chip. NFC is a short-range wireless communication technology; the same used in many new credit cards, whereby the card can be simply swiped across a smartchip to make a purchase. This technology is rumoured to be an inclusion on the upcoming iPhone 5.

The Sony Ericsson XPERIA Arc is powered by a 1GHz Snapdragon processor, has 512MB of RAM and comes with a microSD card slot for extra storage. Strangely, Sony Ericsson has only provided a paltry 320MB of internal memory.

The Samsung Galaxy S II is powered by a 1GHz Orion dual-core processor, has 1GB of RAM and 16GB of internal memory, along with a microSD card slot for extra storage.

The Sony Ericsson XPERIA Arc Android smartphone will launch in Australia in early April on the Optus and Vodafone networks. Pricing has yet to be announced.

The Samsung Galaxy S II Android phone will launch in Australia in May or June, and should be available through all Australian carriers — Telstra, Optus and Vodafone. Pricing has yet to be announced.

What do you think about the Sony Ericsson XPERIA Arc and the Samsung Galaxy S II? Tell us in the comments below!