A stepladder bent and broken against a rack of electrical equipment, debris covering the ground, on-screen radiation readings in the red zone. These are the first images provided by robots from inside the Fukushima Daiichi nuclear power plant after the massive March 11 earthquake and subsequent tsunami led to the world's second-worst nuclear accident.

A pair of iRobot Packbots entered three of the reactor units on Sunday and Monday. Their job was to survey the conditions inside and help Tokyo Electric Power and evaluate whether it is safe to send humans in to continue the cleanup. 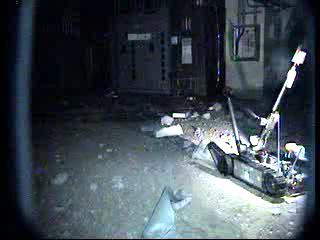 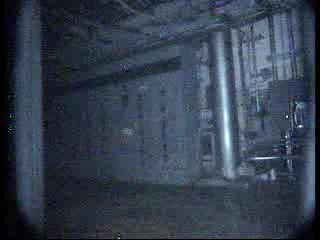 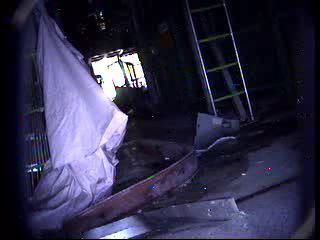 Typically used by bomb disposal squads, the robots can accomplish a range of tasks in hazardous environments, guided by remote operators at a safe location. They run on caterpillar tracks, so light debris presents little problem, and have mounts for several types of sensors. A long arm with a gripper hand can turn handles and open doors.

On Wednesday, Tokyo Electric Power (TEPCO) provided video of the robots at work inside units 2 and 3 at the stricken plant. The video was shot on a camcorder aimed at the screens of two laptops, which act as the control stations for the robots.

It's sometimes unsteady, and the pictures from inside the reactor buildings are not always clear, but the video reveals the current conditions in an area no human has ventured to in weeks.

Unit 3 experienced a hydrogen explosion on March 14 and the video shows light debris strewn around the inside of the first floor. In some places, metal paneling hangs from its screws and there's an unidentified liquid on the floor in a corner. It's in this building that the stepladder sits jammed against an equipment rack.

In addition to sending back images, the robots measured the temperature, gases in the air and radioactivity. In unit 3, they measured radiation levels of up to 57 milliSieverts per hour. That's high enough that a worker would hit their maximum annual radiation dose in just a few hours.

In unit 2, the camera lens was constantly fogged due to high humidity in the building. It's a product, Tokyo Electric suspects, of damage to the suppression pool that sits at the base of the structure. Radioactivity was high in this building too.

The robots are among a small squad of remote-controlled devices being employed by TEPCO to assist in cleanup at the plant. A remote-controlled excavator and dump truck are being used to clear radioactive debris from external areas around the site and a T-Hawk unmanned helicopter is being used to shoot video of the reactor buildings from the outside.

The video and data provided by the Packbots has given TEPCO its first look inside the reactor buildings and adds another piece to the company's understanding of what happened at the plant, and how it might bring it to a cold shutdown -- something that is expected to take up to nine months.