The Motorola Xoom features an attractive, industrial-looking black metal finish on the back and sides, and a front that taken up almost entirely by the 10.1in touchscreen. At 730g, the Xoom is a rather heavy and large device, which may be a deal-breaker for frequent commuters. It also has an oddly mounted power button on the rear.

Acer's Iconia A500 comes in at an identical weight to the Xoom, and although we liked its brushed aluminium back, curved bottom and top edges, and flat sides, the Iconia A500 is also a little on the chunky side — it is thicker, wider and longer than the Xoom. On the upside, the Acer Iconia A500 feels sturdy and well built.

The Samsung Galaxy Tab 10.1v is a different breed altogether. It is made from sturdy feeling plastic and has a carbon-like finish on the rear. This adds a touch of style, and makes the tablet easy to grip. The Samsung Galaxy Tab 10.1v feels well constructed despite its plastic body, and manages to remain lightweight at 599g. However, it lacks the premium feel of both the Xoom and the Iconia A500, and its rear casing creaks when pressed near the charging port, suggesting its quality can't quite match the metal design of its competitors.

The Motorola Xoom, Samsung Galaxy Tab 10.1v and Acer Iconia A500 share identical software, and they also have very similar, capacitive touchscreen displays. All three tablets have a screen that is 10.1in in size, with a resolution of 1280x800.

The display on each of these devices produces vibrant colour and crisp text, but their glossy surface makes them tough to see in direct sunlight, and viewing angles on all three devices are a sour point. Importantly, all three tablets are responsive to touch and this results in a pleasant user experience. 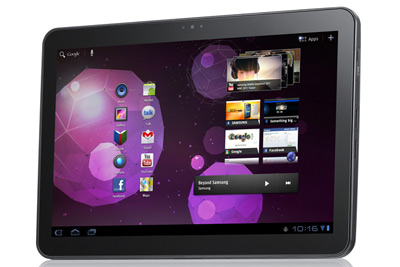 The Samsung Galaxy Tab 10.1v is made from sturdy feeling plastic and has a carbon-like finish on the rear. It manages to remain lightweight at 599g.

The Motorola Xoom, Samsung Galaxy Tab 10.1v and Acer Iconia A500 have similar internals. Both the Xoom and the Iconia A500 are powered by a 1GHz dual-core Nvidia Tegra 2 processor, while the Galaxy Tab 10.1v runs Samsung's own 1GHz dual-core chip. All three tablets have a hefty 1GB of RAM and at least 16GB of internal memory. The Motorola Xoom will be offered by Telstra in a 32GB variant, while the Acer Iconia A500 comes in 16GB and 32GB models.

The Samsung Galaxy Tab 10.1v only has 16GB of internal storage, and surprisingly lacks a microSD card slot for extra storage. If you're looking for a tablet to store a hefty amount of digital media on, then this is a critical factor to consider — both the Xoom and the Iconia A500 come with a microSD card slot for memory expansion.

If you're after a tablet with an excellent camera, the Samsung Galaxy Tab 10.1v is the clear leader in this department. It has a rear 8-megapixel rear camera that doubles as a 1080p HD video recorder, and a 2-megapixel front camera for video calls — both take significantly better quality photos and video than the iPad 2.

The Motorola Xoom and the Acer Iconia A500 both have a 5-megapixel rear camera for photographs and video, and a 2-megapixel front camera for video calls. However, the Xoom can record 720p HD video, whereas the Acer Iconia A500 only records standard definition footage. We don't think many tablet owners will purchase one of these devices based solely on its video recording quality, but this is a feature worth considering regardless.

Acer's Iconia A500 is the only tablet out of the three to include a full USB port for transferring and storing files. This means you can plug in a USB thumb drive to quickly access your files. The Iconia A500 doesn't come preloaded with a file manager but a free download of one from the Android Market makes it easy to access files on the USB port. Even more convenient is the fact that you can plug in a USB keyboard into the Iconia A500 and use it for text input. 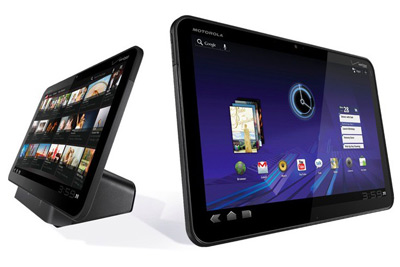 The Motorola Xoom has a 5-megapixel rear camera for photographs and video, and a 2-megapixel front camera for video calls. The Xoom can also record 720p HD video.

Along with a USB port, the Iconia A500 has an HDMI out port, so it can be plugged directly into a high-definition television. The Motorola Xoom also has a HDMI-out port, but doesn't have a full sized USB port. The Samsung Galaxy Tab 10.1v is the clear loser in the extra features department — in addition to lacking a memory card slot, it lacks both HDMI-out and USB ports.

Both the Motorola Xoom and the Samsung Galaxy Tab 10.1v tablets offer 3G connectivity, exclusively through Telstra and Vodafone respectively. It is not yet known if the Xoom sold by Telstra will be network locked (meaning you can't use another providers SIM card in it), but the Galaxy Tab 10.1v is unlocked, and can be used with a SIM card from any carrier. Surprisingly, this includes Telstra's Next G network as the Galaxy Tab 10.1v supports the 850MHz network band.

The Acer Iconia A500 is a Wi-Fi only device, but it will also be released in Wi-Fi + 3G variants at a later, unannounced date.

Battery life is similar amongst all three tablets — Motorola and Acer promise 10 hours of video playback, while Samsung quotes seven hours. In our testing, the Galaxy Tab 10.1v often lasted over two days with moderate use, a fair result for a tablet and a significantly better figure than pre-Honeycomb Android tablets. The Acer Iconia A500 also achieved around the same.

We haven't yet had a chance to test the Motorola Xoom, but we expect it to offer similar battery life to both the Galaxy Tab 10.1v and the Iconia A500.

The Motorola Xoom will be available in May exclusively through Telstra. Pricing and availability has yet to be announced.

The Samsung Galaxy Tab 10.1v is exclusive to Vodafone and will be available for a limited time only, both online and in select Vodafone stores, from 4 May. The device cost $729 as an outright purchase which includes 6GB data with a three month expiry, or a $259 upfront payment, plus $39 per month over 12 months. The latter includes 1.5GB of data per month.

The Acer Iconia A500 is available now starting at $579 for the entry-level 16GB Wi-Fi model, and $678 for the 32GB Wi-Fi model, and is sold through major Australian retail outlets including Harvey Norman. Wi-Fi + 3G variants will be offered at a later date but pricing for these models has yet to be confirmed.