The HTC Sensation has a large 4.3in super LCD display but the big draw card here is its resolution. The Sensation's 540x960 pixel resolution makes it a quarter HD (qHD) screen. In general, the higher resolution the better, as it increases the pixels per inch on the display. The Sensation's qHD screens means you will see more of a website at once, and will also benefit video playback and mobile gaming.

The HTC Sensation's qHD SLCD display may sound impressive on paper, but the vibrancy and brightness of the Galaxy S II's Super AMOLED Plus screen is going to be tough to beat; especially if the regular Super AMOLED display of the original Samsung Galaxy S is anything to go by.

Although both of these smartphones run the Google’s Android 'Gingerbread' operating system, each has a different UI overlay that is intended to enhance the user experience. HTC's Sense seems a little more involved than but both look appealing in their own way and will more than likely come down to personal preference.

Neither the HTC Sensation or the Samsung Galaxy S II come with a HDMI-out port but both phones include something better: a new connection technology called Mobile High-definition Link (MHL). The on-board MHL technology uses the standard micro-USB port on each device for outputting 1080p HD video and audio via HDMI. You'll need an optional microUSB to HDMI MHL connector to enable this feature, but the beauty of MHL means it can also be used with a USB adapter, meaning both the HTC Sensation and the Samsung Galaxy S II can utilise USB on-the-go functionality like the Nokia N8. Along with DLNA connectivity for wirelessly sharing media content, both the Sensation and the Galaxy S II are well equipped for multimedia sharing. 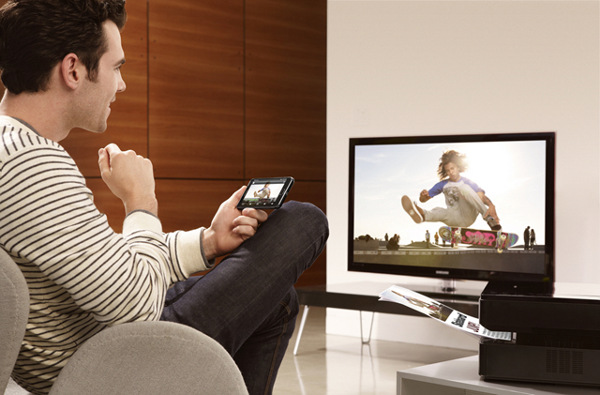 The HTC Sensation and the Samsung Galaxy S II also have very similar specifications in other areas. Both phones have 8-megapixel cameras with geo-tagging, touch focus, face and smile detection, and image stabilization, but the Sensation has a dual-LED flash compared to the Galaxy S II's single LED, and also boasts a feature called instant capture. According to HTC, the instant capture feature eliminates shutter lag; the moment you press the button is the same moment the photo is captured.

One feature the Samsung Galaxy S II may over the HTC Sensation is an integrated Near Field Communications (NFC) chip. NFC is a short-range wireless communication technology; the same used in many new credit cards, whereby the card can be simply swiped across a smartchip to make a purchase. This technology is rumoured to be an inclusion on the upcoming iPhone 5, but we've seen conflicting reports of its inclusion across the world. Samsung says it will ship two versions of the Galaxy S II, one with NFC and one without. The latter is what the company has started shipping in Europe, while the Korean version of the Galaxy S II includes the NFC chip. It is not yet known if the Australian version of the Galaxy S II will include NFC.

Another point worth noting is the fact that the Samsung Galaxy S II is a quad-band HSDPA phone, so it will work across all Australian networks including Telstra's Next G network. The HTC Sensation on the other hand is only a dual-band 900/2100 phone, so it will only work on the Optus and Vodafone networks in Australia. There may be a separate model that will work on Telstra's Next G network (which runs on the 850MHz 3G spectrum) but this is yet to be confirmed.

The HTC Sensation is powered by a 1.2GHz dual-core Snapdragon processor, has 768MB of RAM and comes with a microSD card slot for extra storage. It is expected to be available in Australia in the second half of 2011, though pricing and availability has yet to be announced.

The Samsung Galaxy S II is powered by a 1.2GHz ARM Cortex A9 dual-core processor, has 1GB of RAM and 16GB of internal memory, along with a microSD card slot for extra storage. It is likely to launch in Australia in May, and will be available through all Australian carriers — Telstra, Optus and Vodafone. Pricing has yet to be announced.

What do you think about the HTC Sensation and the Samsung Galaxy S II? Tell us in the comments below!