Earlier this week, we published five things we hate about the Samsung Galaxy S II. We cited its flimsy battery cover, lack of notification LED and physical camera button, Samsung's TouchWIZ UI, and average call quality as aspects of the Galaxy S II we aren't fond of.

Read our comprehensive Samsung Galaxy S II review, and check out our guide to the best upcoming smartphones in 2011.

After playing with the Galaxy S II for over two weeks, here are five things we love about Samsung's latest flagship Android phone.

We simply can't throw enough superlatives at the Galaxy S II's 4.3in Super AMOLED Plus display. It's without doubt the best screen on the market, and although it may not boast a resolution as high as the likes of Apple's iPhone 4 and Motorola's Atrix, its sheer size makes up for any shortfalls. As a comparison, the iPhone 4's 3.5in screen looks almost tiny in comparison, and the extra screen real estate really makes a difference in day-to-day use — particularly given Android's widget-focussed home screens.

The Samsung Galaxy S II's screen produces vivid colours, has superb viewing angles and its brightness has no equal. Many phones on the market are tough to see in direct sunlight, but the Galaxy S II is immune from this issue — on full brightness, the screen can easily be seen in strong sunlight, making it ideal for reading and video watching during long commutes. 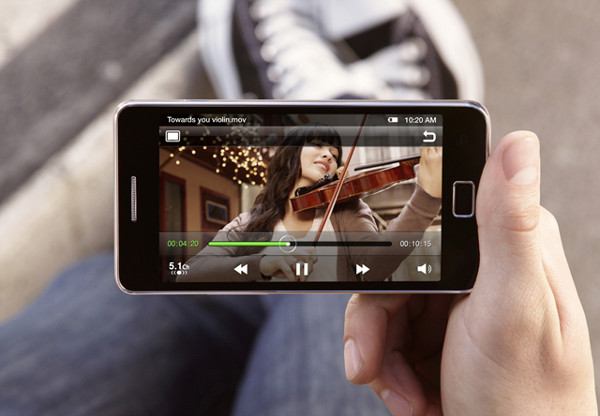 The Galaxy S II's 4.3in Super AMOLED Plus display is without doubt the best screen on the market.

Many reviews have criticised the Samsung Galaxy S II's plastic construction, but we believe Samsung has struck a near-perfect balance with size, weight and aesthetic appeal. The Galaxy S II is just 8.49mm thick — even thin enough to slide under some doors. The extremely light weight of 116g also makes the phone comfortable to hold, and the balance of size and weight means the Galaxy S II is easy to slip into your pocket.

Best of all, the plastic casing of the Galaxy S II does not feel flimsy or poorly constructed (aside from the battery cover), and we like the attractive carbon-like finish on the rear that makes the handset easy to grip.

The Samsung Galaxy S II is powered by a 1.2GHz dual-core processor, currently the fastest phone processor on the market. We know that specs mean nothing on paper, but the reality is the Galaxy S II is the fastest phone we've ever tested. This is most evident when browsing the Web: the Galaxy S II loads pages much faster than the iPhone 4 when we connected the phones to the same Wi-Fi network, and it also breezes through most everyday tasks without a hint of slowdown.

The Samsung Galaxy S II also boasts 21Mbps download speeds, and 5.76Mbps upload speeds — this is faster than most smartphones, and even many dedicated USB modems. Running the speed test application over Telstra's Next G network, we managed to achieve a peak download speed of over 5Mbps, a great result.

With a brilliant, large display and a fast dual-core processor, the Samsung Galaxy S II seems ideal for multimedia. The good news is, the end product is more than ideal: it's almost perfect. The Galaxy S II's 8-megapixel camera captures images with plenty of detail and surprisingly minimal image noise, while it also doubles as a full HD 1080p video recorder. Video quality is smooth and sharp, even if the phone is a little hard to keep steady when in motion. The Galaxy S II also has a 2-megapixel front camera for video calls, which will come in handy when the software gets updated to 2.3.4 — this version of Android will include native Google Talk video and voice calling.

The Samsung Galaxy S II also has a new connection called Mobile High-definition Link (MHL). The on-board MHL technology uses the Galaxy S II's standard micro USB port to output 1080p HD video and audio via HDMI. You'll need to purchase the optional MHL connector to enable this feature, but the beauty of MHL means it can also be used with an optional USB adapter. This means the Galaxy S II can utilise USB on-the-go functionality like the Nokia N8, enabling you to plug in USB flash drives and USB hard drives for transferring files.

The Galaxy S II's Web browser is simply superb. In addition to loading pages quickly, and rendering them perfectly in most instances, it is the first phone we've tested that displays Adobe Flash video with next to no issues. Flash has long been touted as a key feature than Android phones hold over the iPhone, but our experience with this capability in many past phones has been less than stellar. Not so the Galaxy S II — Flash video viewed through the standard browser is smooth and did not affect performance during our testing. In addition, the Galaxy S II's pinch to zoom and scrolling functions is slick and fast, and we did not experience a single crash in over two weeks of use.

The Galaxy S II's 4.3in Web browser displays Flash video without issue, and is both smooth and fast.

Also worth a mention is the Galaxy S II's motion gesture function: tapping and holding the screen with two fingers and tilting back and forth enables you to zoom in and out of the browser or gallery applications. Although we prefer the standard pinch to zoom method, the capability is smooth and fast, and will wow onlookers.

Overall, if you're looking to buy a smartphone, the Samsung Galaxy S II should be the first model on your list. Its combination of a thin and light design, combined with the flexibility of Android, a superb display and best in class performance makes it the top Android phone on the market to date.

What do you love and hate about the Samsung Galaxy S II? Let us know in the comments below!