The tablet market may be still in its relative infancy in Australia, but Google's latest 'Honeycomb' operating system has given manufacturers a nice building block to start from. Two of the latest Android tablets to hit the Australian market are the Acer Iconia A500 and the unimaginatively named Toshiba Tablet (otherwise known as the AT100 in Australia, and the Toshiba Thrive in other markets). With both devices possessing similar pricing, software and specifications, it can be tough to pick a winner.

Read our comprehensive Acer Iconia A500 review, along with our detailed Toshiba Tablet (AT100) review.

The Acer Iconia A500 and the Toshiba Tablet (AT100) both run the same software, so the end user experience is almost identical. Key features of Android 'Honeycomb' include an 'action bar', a contextual option group displayed at the top of the screen, five customisable home screens with a big emphasis on widgets, a recent apps list for easier multitasking, a redesigned on-screen keyboard, a new browser and improved copy and paste. If all that isn't enough of a tongue twister, the platform also offers support for tabbed Web browsing, and 3D graphics. Overall, the Android software for tablets is a huge improvement; tablets running earlier versions of the Android platform felt more like overblown smartphones than tablets.

The software on both the Acer Iconia A500 and the Toshiba Tablet is a 'vanilla' version of the Honeycomb OS, so there is no UI overlay or enhancements slapped over the top of the standard Android interface. However, Acer includes a few small hubs to store and sort downloaded apps on the Iconia A500. These include social, eReading, Game Zone and Multimedia — they are merely a fancy bookshelf background where you can group application shortcuts, and don't add much to the overall user experience.

The Australian model of the Toshiba Tablet ships with Norton Mobile Security software, the ThinkFree office suite that enables the creation of Word, Excel and Powerpoint documents, and the Toshiba Media Player that handles a wide range of video, audio and image files, and can stream music and videos to a DLNA-enabled TV. Toshiba also includes a PrinterShare app that enables wireless printing, though oddly, the app appears to be designed for Android phones rather than tablets, and only fills about a quarter of the Tablet's screen. Perhaps the best inclusion is Toshiba's File Manager app, which easily allows you to access the Tablet's internal memory, the SD card and the USB slot. 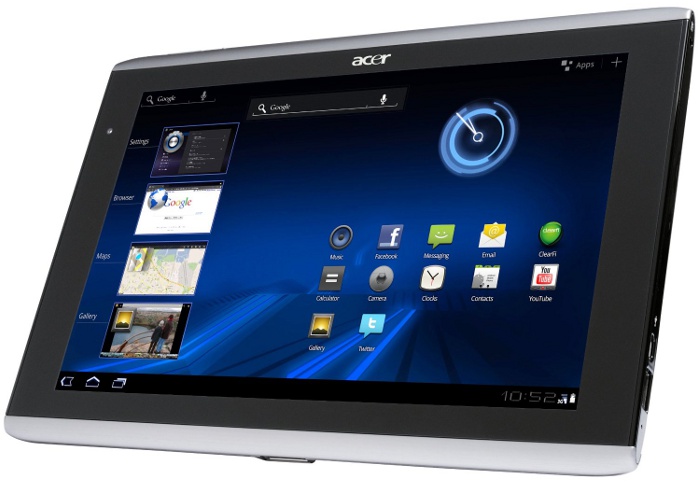 Both tablets offer a slick Web browser that is fast and displays Flash content, most of the time with minimal delay. Each also supports tabbed Web browsing, and the entire browsing experience is as close as you'll find to a full desktop or notebook computer. The on-screen keyboard on both tablets is spacious and comfortable to type on once you get used to the layout.