The iPhone 4S has the same display as the iPhone 4. The 3.5in sized screen uses IPS technology and its 640x960 pixel resolution it has been described as a "retina" display, due to the human eye being unable to distinguish individual pixels. The iPhone 4S's screen has a pixel density of 330ppi — higher than both the Galaxy S II and the Sensation. Text is crisp and clear and images are sharp.

The HTC Sensation has a 4.3in display but the big draw card here is its resolution. The Sensation's 540x960 pixel resolution makes it a quarter HD (qHD) screen. In general, the higher resolution the better, as it increases the pixels per inch on the display. That being said, the iPhone 4S still trumps the HTC Sensation when it comes to ppi: 330 compared to 256.

Both the Samsung Galaxy S II and the HTC Sensation run the latest 2.3 version of Google's Android operating system, otherwise known as "Gingerbread". Version 2.3 of Android equips the Galaxy S II and the Sensation with a revamped keyboard, better copy and paste, improved power management, and a slicker user interface compared to previous versions of Google's mobile platform. Of more importance, however, is the UI overlay that Samsung and HTC have applied over the top of the regular Android interface: it's a bid to distinguish their devices from the wealth of Android masses. 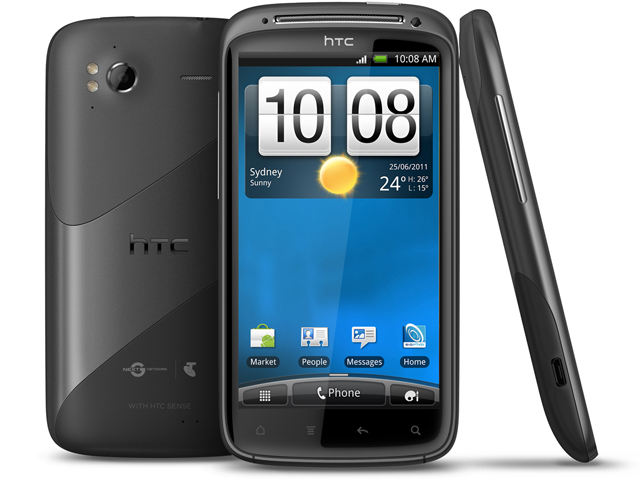 The Galaxy S II gets Samsung's TouchWiz 4.0 UI overlay. Samsung-exclusive features include Social Hub, which groups social networks like Facebook and Twitter, Readers Hub, which stores your downloaded eBooks, Game Hub, which is a portal for compatible games and Music Hub, a streaming music service that will officially launch in Australia later this week.

The iPhone 4S has an upgraded camera. It jumps from 5-megapixels to 8-megapixels and now has a backlight illuminated CMOS sensor that claims better performance in low light situations. The 4S camera can record 1080p video (up from 720p on the iPhone 4) and also has a new image signal processor for image stabilisation and face recognition. Apple was keen to point out its speed: the company says the camera app takes 1.1 seconds to be ready for a photo and then just half a second between successive photos.

The Samsung Galaxy S II and the HTC Sensation also have 8-megapixel cameras. Both have geo-tagging, touch focus, face and smile detection, and image stabilisation, but the Sensation has a dual-LED flash compared to the Galaxy S II's single LED, and also boasts a feature called instant capture. According to HTC, the instant capture feature eliminates shutter lag; the moment you press the button is the same moment the photo is captured. While it's not exactly instant per se, the Sensation is pretty quick to snap a photo.

The iPhone 4S is powered by a 1GHz Apple A5 dual core processor and 1GB of RAM. It also has a dual-core graphics processor to speed up gaming. According to Apple, the dual core CPU combined with the dual-core GPU makes graphics performance up to seven times faster than the iPhone 4. Though these specifications are an improvement over previous iPhone models, they only bring the iPhone 4S in-line with Android competitors, rather than push it ahead. One positive is the addition of a 64GB model iPhone 4S, along with the standard 16GB and 32GB models.

The Apple iPhone 4S doesn't come with a HDMI-out port, but an optional Apple Digital AV Adapter ($45) can mirror whatever is on your iPhone 4S screen to a high definition TV. It's a similar story for both the Samsung Galaxy S II and the HTC Sensation: both smartphones come with a new connection technology called Mobile High-definition Link (MHL). The on-board MHL technology uses the standard micro-USB port on each device for outputting 1080p HD video and audio via HDMI. You'll need to purchase an optional microUSB to HDMI MHL connector to enable this feature, but the beauty of MHL means it can also be used with a USB adapter, meaning both the HTC Sensation and the Samsung Galaxy S II can utilise USB on-the-go functionality like the Nokia N8. 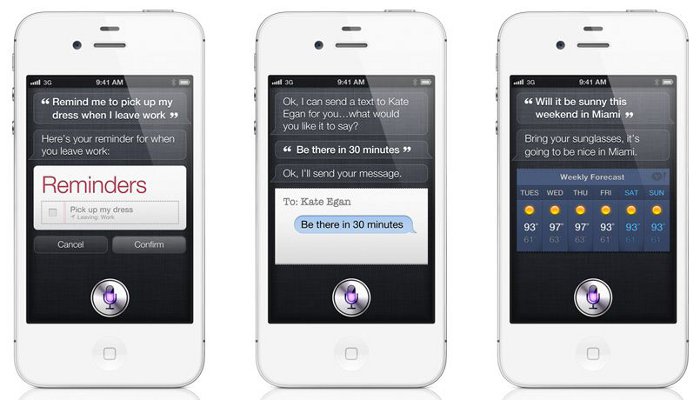 The iPhone 4S comes with a software feature called Siri voice control, described by Apple as an "intelligent assistant".

The iPhone 4S comes with an exclusive software feature called Siri voice control. It's a voice assistant that lets you talk to perform tasks, such as asking for the weather forecast, getting driving or walking directions through Google Maps, making a calendar appointment or setting your alarm. It will originally be a beta release, but Apple says the software will improve as it learns your voice. In good news for Aussies, Siri will work with Australian English in addition to US and UK English. We can only hope its better than most voice recognition software at understanding our accent, as this is often the failing of most voice operated features.

Another point worth noting is the fact that the iPhone 4S is a world phone, meaning it will work across both 3G and CDMA networks. There are no longer any CDMA networks in Australia, but for those who frequently travel to the US, the iPhone 4S' status as a "world phone" will definitely come in handy.

The Samsung Galaxy S II is a quad-band HSDPA phone, so it will work across all Australian 3G networks including Telstra's Next G network. The HTC Sensation on the other hand is only a dual-band 850/2100 phone: it will work on Telstra's Next G network, along with the standard Optus and Vodafone 3G networks in Australia. However, it won't tap into Vodafone or Optus' new 3G networks, which run on the 900MHz 3G spectrum.

What do you think about the iPhone 4S, the Samsung Galaxy S II and the HTC Sensation? Tell us in the comments below!