The Galaxy Nexus is also available through Vodafone on a range of cheaper plans. The best value deal seems to be the $29 cap over 12 months with a $35 per month handset repayment — a total of $64 per month. The total minimum cost works out to be $768, which is just $1 cheaper than buying the phone outright from an online store like MobiCity. Kogan also sells the Galaxy Nexus outright for $789.

"We are delighted to offer our customers one of the most anticipated Android phones this year," said Ross Parker, general manager of devices at Vodafone Australia. "We're offering the Samsung Galaxy Nexus on our great range of Vodafone plans, including Vodafone Infinite and Vodafone Caps, and we are very excited that our customers will be able to enjoy this on our new 850MHz network built for smartphones."

The Vodafone announcement comes just days before Samsung officially launched the Galaxy Nexus in Australia. The company sent an invitation to Australian technology media last week, outlining details for a Galaxy Nexus media briefing. The event is scheduled for Wednesday 14 December and promises "a first look one-on-one briefing of the highly anticipated Samsung Galaxy Nexus." The media event will be hosted by Samsung Australia's vice president of telecommunications, Tyler McGee.

The Samsung Galaxy Nexus is the world's first smartphone to run the latest 4.0 "Ice Cream Sandwich" version of Google's Android operating system. It was jointly unveiled by Google and Samsung in October, has already launched in the UK and Germany, and is expected to officially launch in the US in the coming weeks.

In addition to the latest version of Android, the Galaxy Nexus has a 4.65in Super AMOLED HD display, a 5-megapixel camera that promises "zero" shutter lag, and a 1.2GHz dual-core processor. The phone also has 1GB of RAM and either 16GB or 32GB of internal memory.

Despite not being officially available in Australia, a number of online retailers are already selling the Samsung Galaxy Nexus in Australia. Two of the most popular are MobiCity and Kogan. 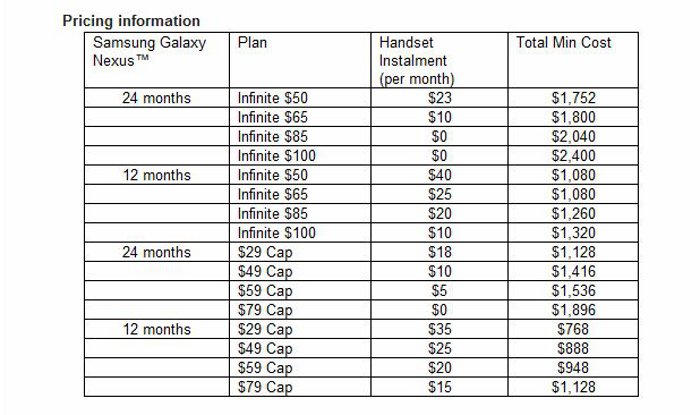