Our survey results show up-and-down results for many printer makers. Samsung received high marks for its printers’ reliability and copy speed, but poor ones for photo and graphics printing quality. Participating readers esteemed Xerox for its machines’ printing speed and network connectivity, but bashed it for their poor reliability. Only Canon, Brother, and Epson had especially strong showings in both reliability and feature satisfaction; and of those three, only Canon also graded high in service and support.

Highlighted in the three charts below are our survey participants' ratings of desktop PC manufacturers in three general areas: reliability, features, and service/support. These results are drawn from our 2011 Reliability and Service survey of some 63,000 PCWorld readers. The other product categories covered in this survey were desktop PCs, laptop PCs, tablets, digital cameras, HDTVs, and smartphones. For a closer look at the methodology we used in our survey to gauge manufacturer reliability and customer satisfaction, see "Reliability and Satisfaction: What the Measures Mean."

The printers section of our Reliability and Service survey prompted some vivid comments from participants, and we spotted a couple of significant details in the data, too:

• In the category as a whole, 14.2 percent of printer owner said that they had run into a significant problem with their machine in the past year. That percentage jumped to 27.6 percent when we counted only Lexmark printer owners.

• Overall, 6.3 percent of printer owners said that that their printer had developed a problem in the past year that was serious enough top prevent it from working.

• "I've used Brother printers for over 15 years at my office. They are workhorses and last a long time. I very rarely have any problems with them." -- Brother printer owner

• "Reduce the noise. When it prints, it sounds like a dinosaur eating a helicopter in my room." -- HP printer owner

More than any other chart derived from our 2011 R&S survey, the one for printer reliability tells a story of extremes, with almost no middle ground. Three manufacturers (Brother, Canon, and Samsung) went a perfect four for four on the positive side, and a third (Epson) went three for four. Then there was a huge dropoff to Xerox, which totted up average marks on two measures and negatives on two others. The remaining five companies we charted (Dell, HP, Kodak, Lexmark, and Ricoh) finished worse than average on three of the four reliability measures. How did Epson manage to rate better than average on "problem on arrival," "any significant problem," and "severe problem," and yet reap only an average mark for "overall satisfaction with reliability"? It's a perplexing question. 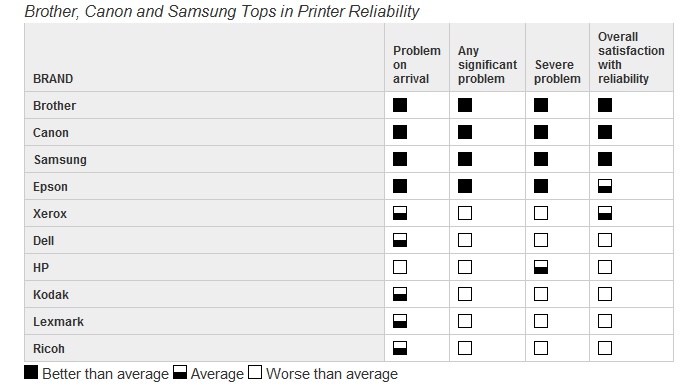 The results on our printer features measures show crests and troughs for several manufacturers. Brother and Canon had the largest number of positive scores--six out of nine--but each also suffered a setback on one measure (Brother went negative on "photo/graphics quality," and Canon followed suit on "printing speed"), which allowed Epson to match them on net positives by carding five better-than-average marks and four average marks. Xerox deserves recognition for its solid showing, too: better-than-average ratings for "network connectivity," "printing speed," and "text quality," with no subpar scores.

Only six companies received enough ballots to qualify for inclusion on our printer service and support measures. In that reduced field, we found two obvious winners (Canon and Lexmark) and one clear loser (HP).