Available in Telstra stores from today, the Samsung Galaxy Tab 8.9 4G is just the third product to work on Telstra's 4G network. The telco released the 4G USB modem in October last year and then followed that up with the HTC Velocity 4G Android smartphone last month.

Telstra says the Galaxy Tab 8.9 4G will provide typical download speeds of between 2 megabits per second (Mbps) and 40Mbps, and typical upload speeds of between 1Mbps and 10Mbps, provided consumers are in a 4G coverage zone. Like the Velocity 4G smartphone, the Galaxy Tab 8.9 4G features dual channel HSPA+ connectivity, making it faster than most phones and tablets even when not used in a 4G coverage zone. The 4G network used by Telstra is best described as an LTE enablement of its Next G network. It runs on the LTE 1800MHz network band but "switches across" to the Next G network when 4G coverage is not available.

"In 4G coverage areas the Galaxy Tab 8.9 4G can offer speeds typically reserved for the office which will make it hugely popular with businesses too, said Warwick Bray, executive director, Telstra Mobile. "Customers will be able to access email, cloud-hosted applications and documents without the need for a bulky laptop and it's perfect for sharing multimedia content on client visits."

Telstra's 4G coverage is currently available in all eight capital cities (5km from GPO) and their respective airports in Australia, along with 80 regional and metropolitan centres (3km from city centre).

4G capabilities aside, the Samsung Galaxy Tab 8.9 4G has an 8.9in capacitive touchscreen and has an impressive physical design — it measures just 8.6 millimetres thick and weighs only 470g, making it both thinner and lighter than the iPad 2. Samsung says the Galaxy Tab 8.9 4G's ultra-thin form factor and lightweight design are ideal for business users who frequently travel.

"Samsung is delighted to partner with Telstra to offer consumers Australia’s first 4G tablet device, said Tyler McGee, Samsung's vice president of telecommunications. "We know speed is increasingly important to Australians as is portability and a sleek, stylish form factor, both of which the Galaxy Tab 8.9 4G offers in spades."

The Samsung Galaxy Tab 8.9 4G is powered by a 1.5GHz dual-core processor, has a capacitive PLS TFT display with a 1280x800 resolution and features Bluetooth, Wi-Fi and GPS connectivity. The Galaxy Tab 8.9 also has a 3 megapixel rear camera and a 2 megapixel front camera, and is capable of playing back 1080p HD video.

The Samsung Galaxy Tab 8.9 will come in 16GB ($720) and 32GB ($840) variants, with the former available in Telstra stores from today. Telstra says the 32GB model will "launch shortly". The tablet will be available on four Telstra data+tablet plans over 24 months, starting from $49 per month.

Telstra's data+tablet plans for the 16GB Samsung Galaxy Tab 8.9 4G are as follows: 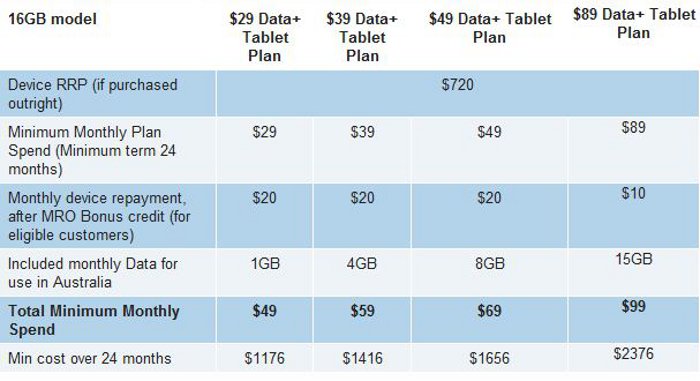