Apple this morning lifted the lid on its third-generation iPad, simply called the "new iPad". Like many analysts predicted, it is an incremental upgrade rather than a completely new model. However, one of its heralded new features, 4G connectivity, won't be available in Australia.

The new iPad looks identical to the iPad 2, but boasts a high resolution "retina" display, has an upgraded 5-megapixel camera and is powered by Apple's new A5X dual-core processor, which claims improved graphics performance thanks to a quad-core GPU. It also boasts 4G connectivity that, for now, simply is not compatible with any Australian networks.

The new iPad is 4G (LTE) capable in the US and Canada, with separate models that will work on the Verizon and AT&T networks. However, Wi-Fi + 4G models of the new iPad use the 700MHz and 2100MHz LTE bands while Telstra, the only carrier in Australia to have a 4G network, uses the unsupported 1800MHz band. Aussies will still benefit from dual-channel HSPA+ technology which provides a theoretical maximum download speed of 42Mbps, but this is not 4G. Think of it more as 3G+. 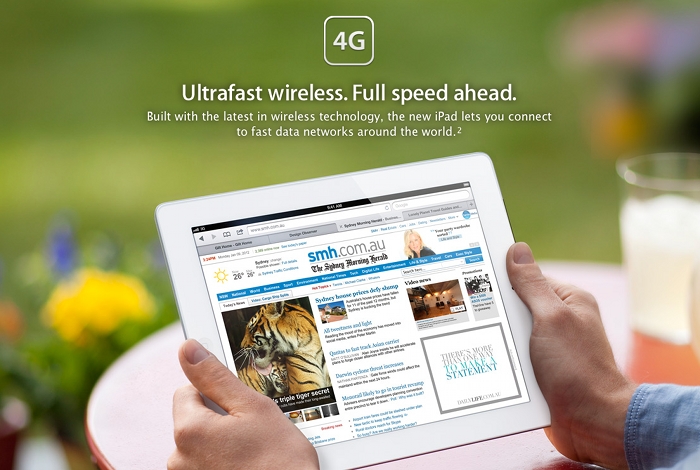 Despite not being compatible with Telstra's 4G network in Australia, Apple still advertises 4G on its Australian iPad Web page.

Given that the iPad's 4G capabilities won't be of any use in Australia, it seems a little odd that Apple is still advertising 4G connectivity as a feature on the Australian Apple Web site. 4G is listed as one of the major new features on the dedicated, Australian iPad page, while the wireless broadband model of the new iPad is now called Wi-Fi + 4G rather than Wi-Fi +3G.

Under the catchline "Ultra fast wireless. Full speed ahead", Apple says the new iPad is "built with the latest in wireless technology." While the new iPad certainly does have this technology available, the fact that it isn't compatible in Australia is enough to potentially confuse consumers.

We contacted an Apple Australia representative to ask why the new iPad will be marketed with 4G in Australia when the feature isn't compatible Down Under, but we are yet to receive an official response. We'll update this article with any new information if and when it comes to hand.