Apple has finally unveiled its third-generation iPad, simply called the "new iPad". The new iPad looks identical to the iPad 2, but boasts a high resolution "retina" display, has an upgraded 5-megapixel camera and is powered by a dual-core A5X processor with quad-core GPU. The new iPad also boasts 4G connectivity, though Aussies will miss out, at least for now.

Should you buy one? How much does it cost? What is the deal with 4G connectivity? All your questions and more are answered in our ultimate new iPad buying guide.

Why you should buy the new iPad

Like the original iPad, and the iPad 2, the new, third-generation iPad has been designed primarily for consuming media — watching videos, viewing photos, reading books and browsing the Internet. It's best described as a media consumption device, rather than a media creation device. If you're interested in typing up long documents or creating a 70-page PowerPoint slideshow, then the new iPad still isn't for you. It's important to understand that the new iPad is not a notebook or laptop replacement and really wasn't designed to be.

The new iPad's many appealing features include an excellent design, an outstanding, high resolution screen, access to the App Store with almost 200,000 dedicated apps designed specifically with the iPad in mind, excellent battery life of up to 10 hours and slick performance overall. The new iPad remains is a very entertaining device, particularly when it comes to media consumption. 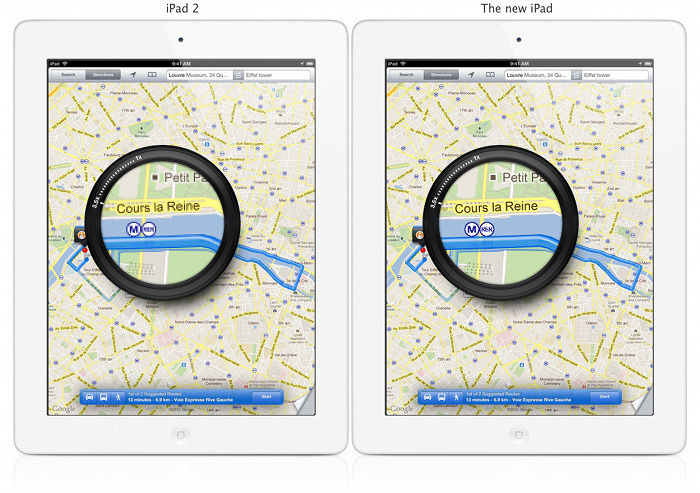 The new retina display is the clearly the key aspect of the new iPad and will undoubtedly be its biggest selling point. The screen has a resolution of 2048x1536, double that of the iPad 2. This gives it a pixel per inch (ppi) of 263, a significant increase over the 132ppi of the iPad 2. Officially, Apple says the retina display resolution is higher than most high-definition televisions.

The new iPad also has some other upgrades, notably a much improved 5-megapixel rear camera and a faster, quad-core graphics processor that promises faster gaming performance. Though these are both welcomed upgrades, its the screen that will appeal most to potential new buyers.

Why you shouldn't buy the new iPad

The new iPad once again lacks a USB port and a memory card reader; both often criticised features on a device that's perfect for viewing and storing photos.

The new iPad has an almost identical design to the iPad 2, except it is slightly thicker and heavier.

How many models of the new iPad are there?

As it did with the original iPad 2, Apple is launching a total of six new iPad models — three with Wi-Fi and another three with Wi-Fi and 4G connectivity. (More on 4G later). The Wi-Fi+4G iPads use a micro-SIM card (a smaller version of a regular SIM card found in mobile phones) to access a telco's network, in much the same way a smartphone accesses the Internet. Both Wi-Fi and Wi-Fi+4G models of the new iPad will be available in 16GB, 32GB and 64GB versions.

How much does the new iPad cost?

The new Apple iPad will be sold in Australia in a total of six models (in black and white colours) and is priced as follows:

When will the new iPad be available in Australia?

Apple will launch the new iPad in Australia on Friday 16 March. The new iPad will once again be sold in Australia through the Apple Store, Apple's retail stores and select Apple authorised resellers. It is also sold through Australia's three telco's on a range of contract plans.

Next page: 4G and all pricing details from Telstra, Optus and Vodafone