It started in a pub and ended in two years' hard labour. TownCraft, a chilled out, Minecraft-inspired village-building title for the iPad, is a product of the blood, sweat and beers of Flat Earth Games and earlier this month made the leap from the Australian and New Zealand market to the global iTunes Store, letting players from around the world enjoy the efforts of the local indie development house.

Flat Earth Games was founded by Rohan and Leigh Harris. The brothers, the former with a background in application development and the latter in games journalism, are the designers of TownCraft and with a motley (and compact) crew of artists and a musician, and the support of Sydney games studio Epiphany Games, released TownCraft for the local market in July. 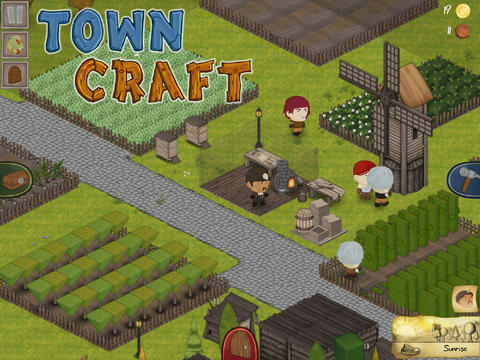 The initial spark for its creation, Rohan says, stemmed from a discussion with friends in a pub about the smash hit indie game Minecraft. Minecraft was created by Markus Persson (more commonly known by his online moniker, notch) and has turned into a symbol of the indie gaming renascence.

That game has sold more than 12 million copies. Its sandbox-based, player-paced gameplay has not only entertained millions of players from the very young to the elderly, it has wormed its way into seemingly unlikely arenas, such as schools and urban planning experiments.

Rohan believes (and contended in the fateful pub discussion) that Minecraft isn't just a remarkable title because of its popularity, but because it has also helped define a new genre of games.

"I was discussing some of the games that had started coming out that were a bit like Minecraft and one of my friends dismissed them, saying 'The Minecraft clones will pass. None of them will do what Minecraft's done.'

"I thought about it and realised that it's kind of an interesting thing to bring up, because we used to call them 'Doom clones' and 'Quake clones' and now they're called first-person shooters. Then there were Warcraft clones, and that then became real-time strategy games. "

Rohan began penning an article on how this new genre was being defined by Minecraft and the games that it has inspired.

"To prove my point, I started nutting out some possibilities. 'Okay what would happen if we made a Minecraft-like game merging with different genres.' One of the ideas I came up with is what became TownCraft."

That idea turned into a conversation with Leigh about it and a subsequent discussion with a friend at Epiphany Games. "I just wanted someone to bounce ideas off, and being that that's his sort of business, I thought he would be the person to talk to." Instead, it turned into two years of hard work for the Harris brothers as they strived to put together a game on less than a shoestring budget.

With no money, the brothers came up with a profit-sharing model to rope in the help they needed to make TownCraft a reality. They approached a teacher at the Academy of Interactive Entertainment to see if any students were interested, and nabbed their first designer, which led to a second designer. The music was composed by a friend Leigh knew from his games journalism days. (Rohan says: "We had a montage where the team came together. There was some fast-paced music.") 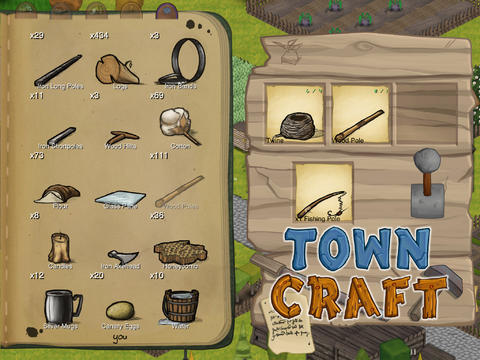 For the profit-sharing model, they estimated how many hours people were working and figured out a percentage split based on that. Towards the end of the development cycle, they also scraped together some money to pay for last minute polishing of TownCraft.

If the reception so far is anything to go by, the team's efforts have been worth it. Independent game review site Digitally Downloaded gave the title a rating of four out of five. An smh.com.au review described it as a "great little game".

After launch, the game was selling several hundred copies a day, the brothers say. And before being made available for players outside of Australia and New Zealand, several thousand people had already bought TownCraft.

Flat Earth Games' efforts has received a lot of support within Australia; however, the potential for sales overseas dwarfs the market within the country and international sales have already overtaken local sales in the short time it has been available.

It's not the end of the TownCraft saga just yet. The game is still being updated, both with the predictable bug fixes and with additional content. And the Harris brothers say that Flat Earth will keep adding content as long as there is interest in the title.

"As long as people are continuing to buy the game, we'll still continue to update it," Leigh said.

"I think if we run out of the things that we've currently got lined up but there's still a lot of interest in the game, then we'll just continue pouring more into it."

Converting the game to work on the iPhone or porting it to Google's Android platform are also possibilities.

"We've built the entire game engine so it is as cross-platform as possible," Rohan says. "What it comes down to is sales, which will dictate how financially viable moving to other platforms is."

And beyond TownCraft, the brothers have already been thinking about what title could be next for Flat Earth Games.

"We've been talking ever since we started development on what our second game is going to be," Leigh says.

"At different points it was different games, but I think again it comes down to waiting to figure out how successful TownCraft is going to be. If it's a runaway success, then we'll be leaning much more towards doing a subsequent TownCraft game of some kind. If its sales are modest then we'll potentially shift towards one of our other ideas."

Despite the hard work and emotional toll completing the game involved, the Harris brothers say there's no turning back for them now.

"The thing is, it's fun," Rohan explains. "As frustrating as video games can be, the fact is that I just love actually making them. So as long as I can support myself doing this kind of thing, I'm cool with it."

"You certainly don't get fan mail about writing applications," he adds.

TownCraft is available for the iPad from the iTunes Store.