The 8th-gen Core i7-8550U's gaming performance is nothing to write home about. And it shouldn't be, as it's very much the same graphics core as the previous chip. We ran 3DMark's Skydiver 1.0 test and then focused on the graphics performance results. This ignores the extra x86 cores it has, so consider it a pure test of the graphics subsystem.

The 8th-gen chip's UHD 620 graphics core come out slightly ahead of the 7th-gen's HD 620 graphics core, but for the most part they're pretty close. Intel basic IGP is adequate for entry-level or low-ambition gaming. Don't expect much more without stepping up to an Iris Plus-based CPU or discrete graphics chip.

The battery life results are a lot more difficult to interpret. Keep in mind that our battery rundown test is not a CPU test. It's a video rundown test. We charge the laptop's battery to full, then unplug it and run a 4K movie (the open-source Tears of Steel) repeatedly until the laptop dies. The laptop's brightness is set to 250-260 nits, audio is on, earbuds are used, and airplane mode is engaged. The video, for the most part, runs entirely within the media engine of the CPU, so whether it has four cores or two cores shouldn't matter that much.

Although the last few generations of XPS 13s look the same on the outside, internal differences in screen resolution, touch support, and other components can play a huge part in the results. For example, the 8th-gen XPS 13 has a 1920x1080 non-touch screen, while the 7th-gen XPS has a 4K 3840x2160 panel with touch. Higher-resolution screens tend to suck a lot of power.

Still, there is something to be gleaned from the results. For kicks, we also found a 7th-generation Core i7-7200U with a similar-resolution screen to the current 8th-gen model we're testing. The results are pretty promising: While the 7th-generation XPS 13 with the same resolution screen gives us about 11 hours of battery life, the 8th-gen laptop finishes at about 12 hours, second only to the much older Broadwell XPS 13.

If you're wondering why the Broadwell-based XPS 13 does so we well despite having a smaller battery our guess is the amount of RAM and the SSD, as well as any differences from the CPU and motherboard. That particular XPS 13 has only 4GB of RAM instead of the 8GB the 8th-gen and 7th-gen XPS 13 models have. System RAM does eat power, so having double the amount of RAM could be a drag on battery. We also suspect the SATA-based M.2 SSD and its rated active power consumption of 190 milliwatts, vs. the 4-watt power consumption of the Toshiba XG5 NVMe SSD in the 8th-gen XPS 13, make a difference.

And if you're wondering how much of a hit you take from a higher-resolution, touch screen, just look at the bottom of the chart below to see how well the touch-based, higher-resolution laptops did.

The 8th-gen can be faster on lighter loads

We've been playing with Cinebench's ability to vary the thread load to try to simulate just what kind of performance you get as you slide the load on the CPU from one to eight threads.

Running Cinebench on the laptops, we can see the latest 8th-gen Core i7 surprisingly has a performance advantage on very light workloads. At the far right side of the chart though, the 15-watt chip can't keep up with the 45-watt chips, falling into third place.

The good news is fourth place is not even in this race. This is a good show for the 8th-gen quad-core Core i7.

To see how the clock speeds react under loads, we again looked what the various laptops hit 10 seconds into a Cinebench R15 run. You can see just how much of a clock speed advantage the 8th-gen Core i7-8550U holds over all others on those light loads just a few seconds into a test. Note: In the chart below, we've focused on clock speeds from 2GHz to 4GHz to make it easier to read.

But the thing is, once you warm that tiny XPS 13, it's not going to sit at those ultra-high clock speeds for that long. So we decided to record the clock speed the various XPS models would hold for the entire benchmark run.

As you can see, on a single-threaded workload, the 8th-gen Core i7-8550U has no problems running at 4GHz. Once we move it to two threads and then three threads, the chip burns through its very high burst mode faster than a nerd eats Doritos.

So yes, a 45-watt TDP with better cooling is going to be faster than a 15-watt one in a smaller, thinner laptop.

What about Ryzen 7 mobile vs 8th gen Core i7?

There is one question left outstanding, and that's AMD's recent announcement of its Ryzen 5 and Ryzen 7 mobile CPUs. AMD says Vega goodness plus Zen goodness will equal a new mobile CPU to give 8th-gen laptops a serious run for the money while using similar or less power. We haven't seen these new Ryzen 5 and Ryzen 7 laptops up close yet, though, so until the company can prove it, and prove it in laptops people might want to buy, we'll have to wait and see. 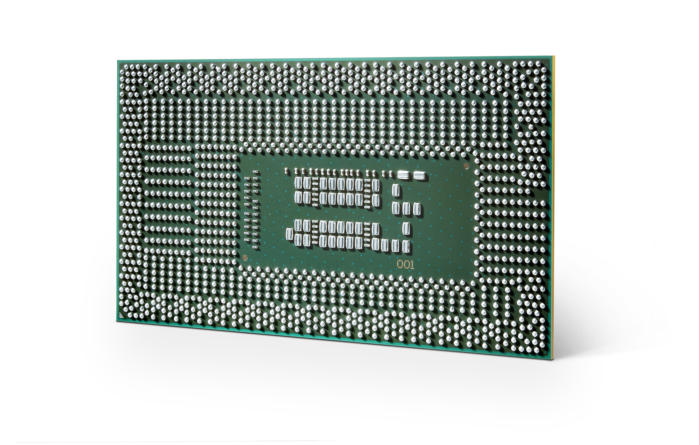 There's only one way to describe our experience with the Core i7-8550U inside the Dell XPS 13: Impressed. No wait, damned impressed would be a better way to couch it. For years Intel's CPUs in Ultrabooks have improved mostly incrementally, from 4th-gen Haswell to 5th-gen Broadwell, to 6th-gen Skylake. Sure, 7th-gen Kaby Lake represented a healthy bump over Broadwell, but not like this.

The 8th-gen Kaby Lake refresh, as it's called, is a quantum leap forward for ultra-portable laptops. You've simply never been able to get this kind of performance from something so small before. Yes, it's that good.

Remember that this is just one example. Unlike desktops, where the variance from CPU to CPU is minuscule, laptop cooling designs and decisions on fan noise and thermals will likely have a huge impact on the new 8th-gen CPU's performance.

But in this Dell XPS 13, the 8th gen Core i7 simply rocks. A full review of the laptop is forthcoming, but as you've already seen, this thing is fast.