The HomePod was discontinued after just three years on the market (get it now while supplies last), but Apple isn't giving up on its smart speaker ambitions. Released last September alongside the iPhone 12, the HomePod mini was meant to be a smaller alternative to Apple's high-priced, high-fidelity speaker, but now it's the only game in town. And if you want to set up a Siri-based smart home, it's essential.

The HomePod mini still has the mesh grill exterior available in space gray or white, but it has an entirely different shape than the HomePod. It's a sphere rather than a cylinder, and its look is somewhat reminiscent of the mesh-protected apples you might find at the supermarket and isn't much bigger. The HomePod mini measures 3.3 inches tall, less than half the height of the HomePod, but it feels even smaller than that in person. The entire top is a display, but it's mainly for Siri and status lights and can be hard to see from across the room. Like the original HomePod, the mini's cord is permanently attached and somewhat inflexible, but no matter where you put your HomePod mini, it's certainly a statement piece.

While it might look small and unpowered, the HomePod mini is actually just as capable as the larger model, while its size means that it has fewer speakers and microphones than the larger model. As Apple describes, the HomePod mini has a full-range driver, powered by a neodymium magnet and a pair of force-canceling passive radiators, but its sound isn't nearly as deep as the larger HomePod. It's particularly lacking in bass, which was the original HomePod's strongest suit, but the mini is still plenty powerful enough to fill a room with sound, especially if you pick up a pair of them and set them up as stereo speakers on an iOS device or Apple TV.

Since the HomePod mini is a Siri device, it has three microphones that are always listening for voice prompts, as well as an internal mic to help isolate the speaker's sound so it can hear the Hey Siri command even while playing music. Apple uses the S5 chip to process the sound, the same processor in the Apple Watch SE. 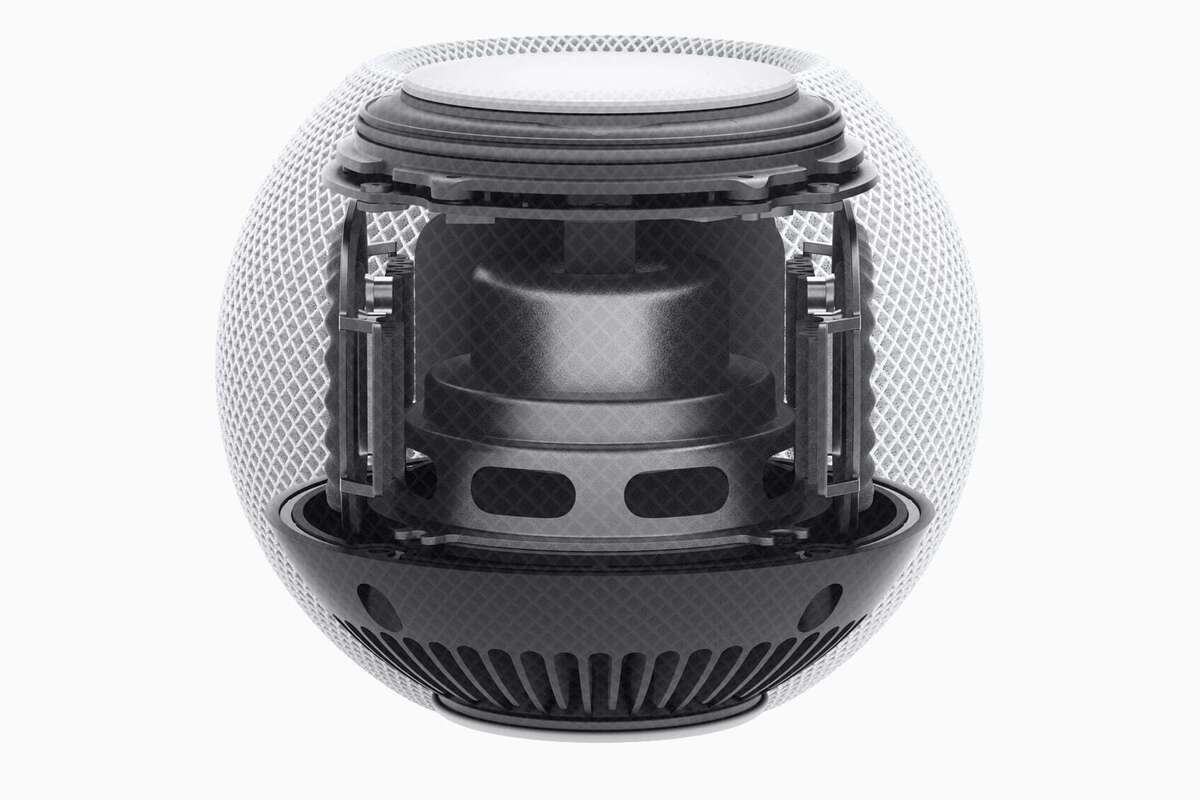 Even with a pair of speakers, however, the HomePod mini doesn't support Dolby Atmos, Dolby Digital 7.1, or Dolby Digital 5.1 surround sound like the larger HomePod.

Apple Music and other streaming services

The HomePod mini greatest strength is playing music, and if you're an Apple Music subscriber, it's an excellent companion. It also works well with the Apple Podcasts app, and radio stations from iHeartRadio, Radio.com, and TuneIn. During the HomePod mini announcement, Apple teased support for third-party music services, but so far only Pandora is supported. The Google Home and Amazon Echo both support Amazon Music and Spotify, so it stands to reason that more services are on the way.

Like the full-sized HomePod, HomePod mini relies on Siri as its main interface, using voice commands to play music and podcasts, control smart home devices, and answer general knowledge questions. You can also use Siri for personal updates, such as asking about your schedule, the weather, traffic, and reminders as well as any Siri Shortcuts made on your iPhone or iPad. 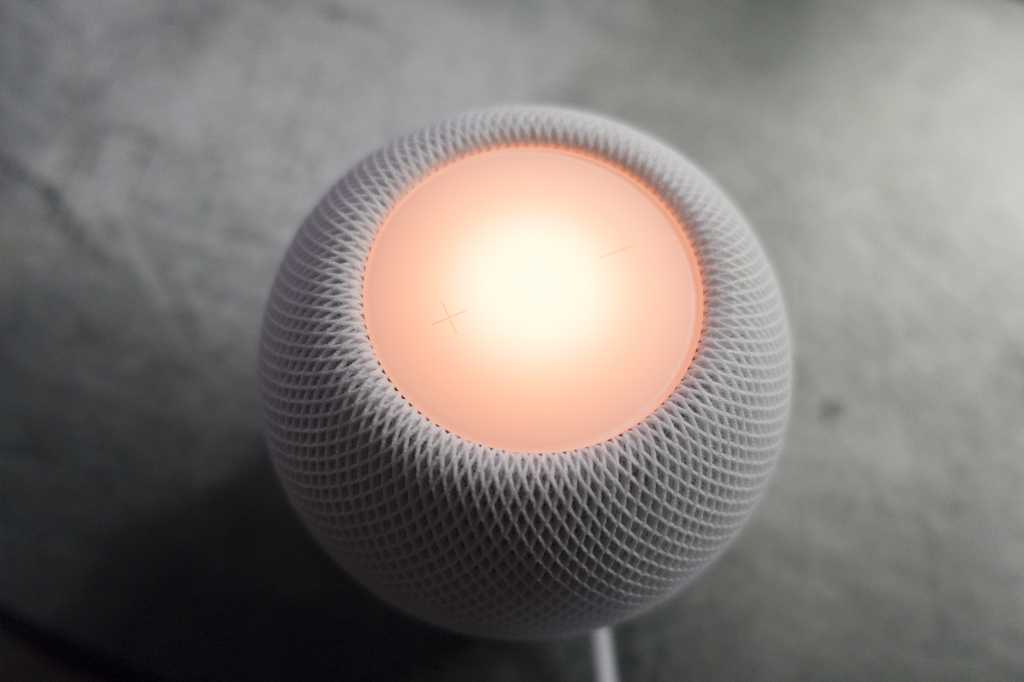 If you plug HomePod in with a power adapter that isn't 20W or higher, it'll get angry.

Apple continues to protect your privacy while using Siri. Siri requests are sent to Apple's servers only when Siri is activated, and those requests are not associated with your Apple ID. Apple also says it does not sell your personal information to third parties. It does, however, store some anonymous audio recordings to improve the accuracy of Siri, but you can opt-out in the Privacy tab in Settings on your iPhone. You can also delete your entire Siri history in the same tab.

Apple lets you set up a device as a home hub to control HomeKit devices remotely from a central location, and the HomePod mini is the most economical of the options. And the beauty of it is you don't actually have to do anything to set it up. Once you sign into your iCloud account, your HomePod mini will automatically set up as a home hub so anything you add to the Home app will be able to be controlled when you're not around. You'll also be able to create scenes and automations based on time or location that do things like turn on the lights when you get home or shut them off with a simple command.

Your HomePod mini is a small but powerful hub for your Apple smart home.

In addition to playing music and summoning Siri, HomePod has a nifty Intercom feature that lets you send and receive messages from one HomePod mini to another, or an iPhone, iPad, iPod touch, Apple Watch, and CarPlay-connected car. When you ask Siri to Intercom or ask everyone, it will display an alert on all available devices with Intercom turned on and provide an audio recording that can be played. Oddly, the Mac isn't part of the Intercom feature. 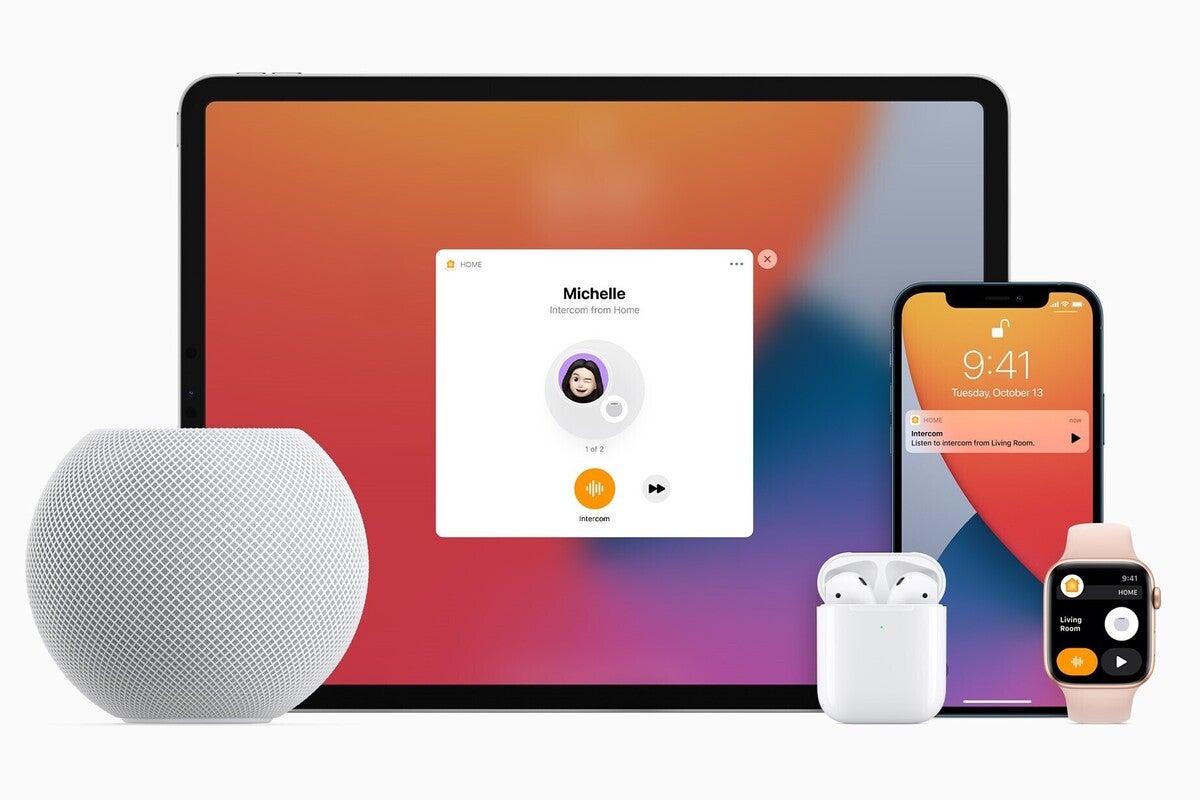 An Intercom message is sent to other HomePod minis, as well as your devices.

The HomePod mini has Apple's U1 chip, which provides the device with ultra-wideband, a radio communication technology that uses very little power, works in a short range and has a high bandwidth. The U1 allows for some cool iPhone tricks as well. You can hand off music playback from your iPhone to the new HomePod, as well as receive pop-up media controls without having to unlock your ‌iPhone‌. You can also get personalized listening suggestions as well as visual, audible, and haptic effects when transferring sound between devices.

But Apple likely has much bigger plans for the U1 chip. It could create an API that lets smart device makers tap into the U1 chip and create automations and interactions that don't need an app to be installed. Or it could tap into Siri Shortcuts to generate room-based responses and actions from HomeKit devices without calling on Siri to act. There are lots that Apple can do with the HomePod mini's U1 chip, so we'll have to wait and see what arrives in future updates. 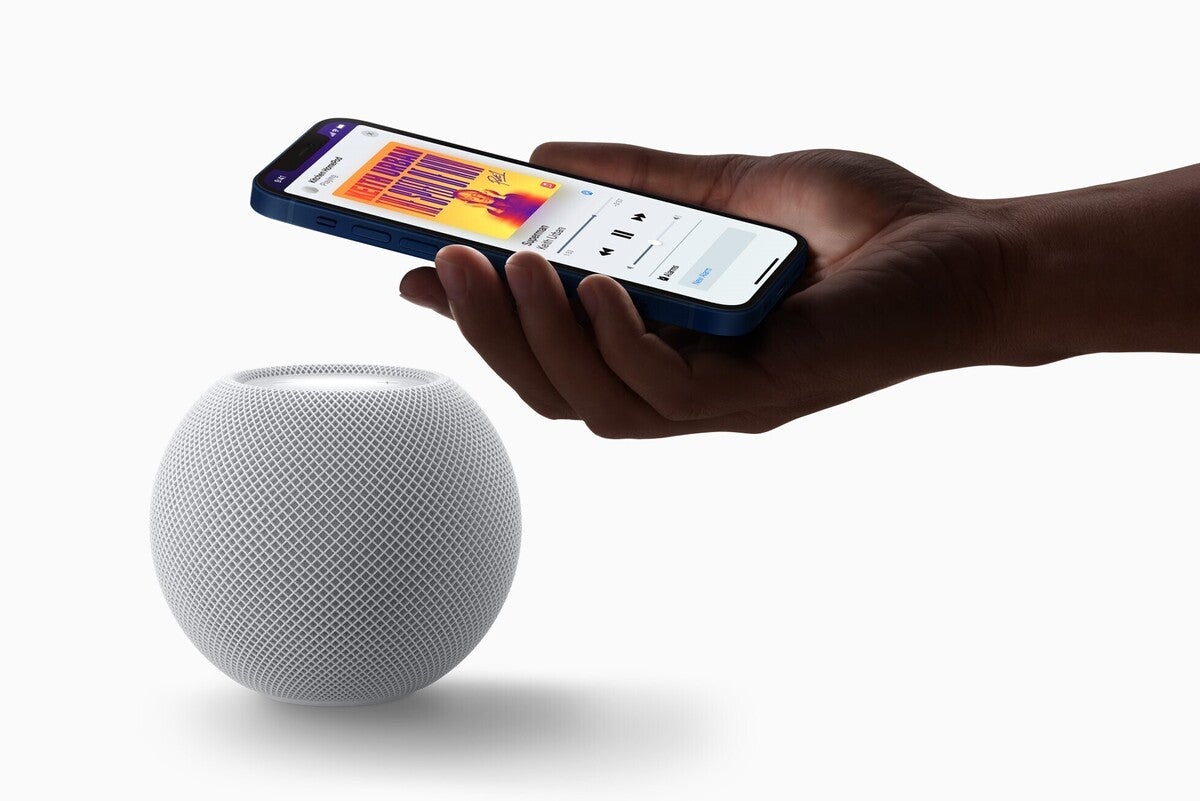 With its U1 support, you can hand off audio from your iPhone to the HomePod mini.

However, to use these features, you'll need devices that are equipped with the U1, according to Apple's HomePod mini website. That means you need an iPhone 11 or later. Older iPhones won't be able to perform these features. 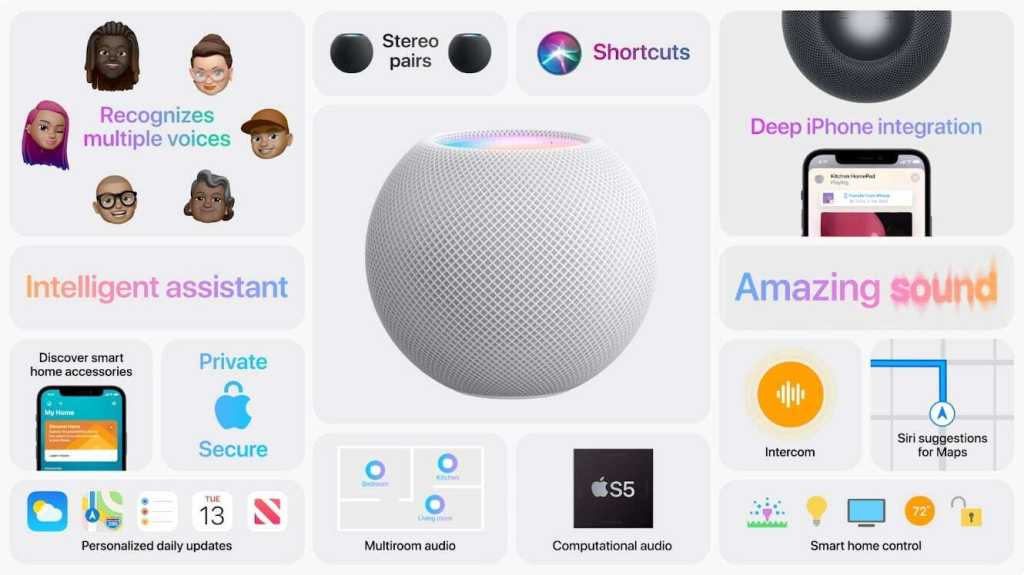 The HomePod mini is $99 USD, and is available in space gray and white in the following countries:

HomePod mini is compatible with the following devices:

If you're looking to set up an Apple smart home, there are three options for a hub—an iPad, Apple TV, and HomePod mini. At $99, the HomePod mini is the most economical of the bunch and it's a smart speaker, so you can ask it to perform actions and routines just like an Amazon Echo device. HomeKit devices are becoming cheaper and more prevalent, so setting up an Apple smart home is easier than ever especially with a HomePod mini to control it all. It doesn't sound as good as the original HomePod, but it's still better than an Echo Dot, and for $99, it's a must-have device.

Read our review
Best Prices Today: US$99 at Apple