If you have a Mac, you have Safari—it's the built-in default web browser and it's a great one. Apple's macOS browser is very fast, respects your privacy, and works seamlessly with Safari on iPhone or iPad through iCloud syncing features. But it's not the only game in town—and it's not the only one that runs natively on a new M1 Mac.

Unlike on iOS and iPadOS, Apple is quite permissive about running full web browsers on macOS. Mac browsers can use their own technologies to render webpages and set themselves to be the default web browser. So the experience can be quite different depending on the browser you're using. Of course, there's nothing wrong with sticking to Safari, but depending on your own particular needs, it might not be the best browser. Some services, like YouTube TV, won't run on Safari at all, and some features, like YouTube's support for 4K video, take longer to reach Safari than other browsers. Here are five other browsers ready for the M1 Macs worth trying out.

By far the most popular browser in the world, Google's Chrome is fast and offers a lot of flexibility through its many powerful extensions. If there's a standard for web browsers, Chrome is it.

On the plus side, you get a powerful and flexible browser that, due to its popularity, is likely to be supported by whatever web app or service you care to use. If you use your Mac alongside non-Apple platforms like Android or Windows, you can sync bookmarks and history between them with your Google account.

Chrome was one of the first browsers to add support for Apple silicon Macs with version 87 in November. When it landed, Google claimed that the M1 allowed Chrome to cup CPU utilization up to 5x and extend battery life for MacBooks. Google also says it starts up 25 percent faster, loads pages 7 percent faster, and uses less RAM. In out experience, those claims aren't so outlandish, and the Chrome performance between an M1 Mac and the Intel one under Rosetta is definitely noticeable.

Chrome is available for iPhone and iPad as well, though, like all browsers on those platforms, it uses Apple's own Webkit rendering engine. Still, you can use it to take advantage of synced bookmarks and tight integration with services like Google Search or Translate. 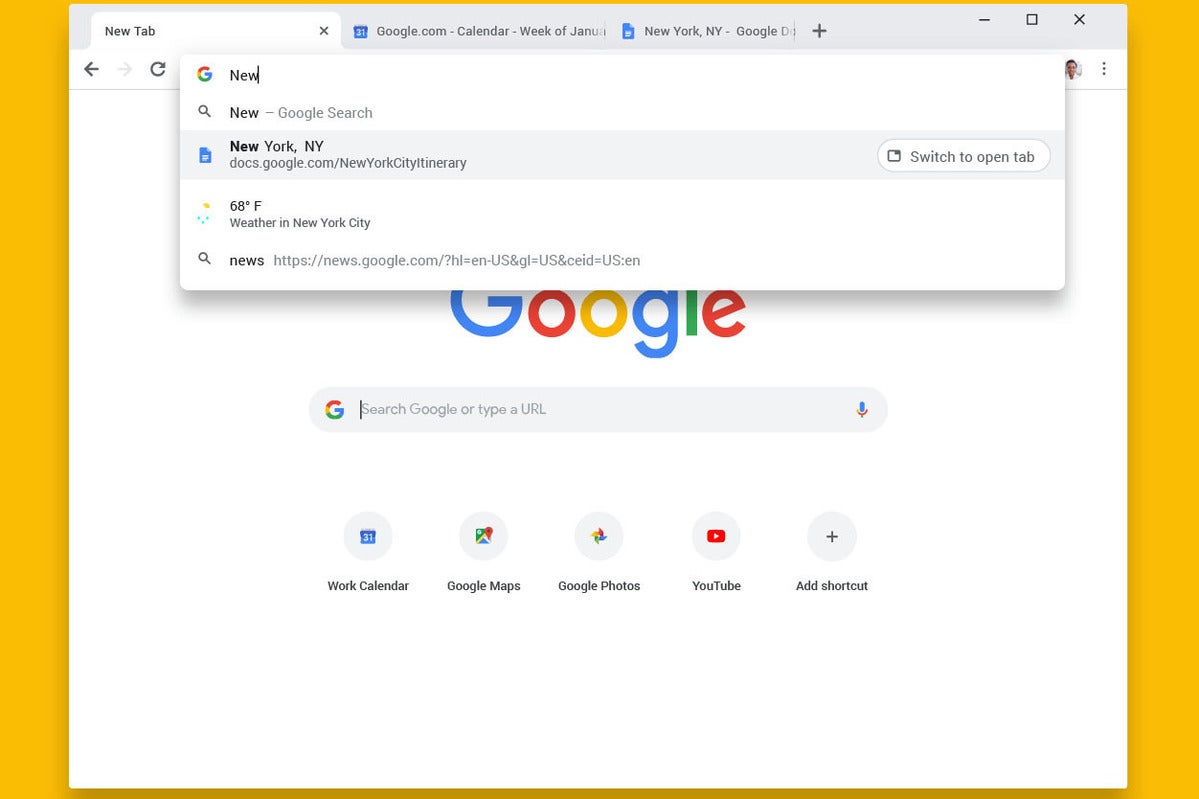 Chrome's advantages are its ubiquity, Google integration, and extensive library of extensions.

If there's a downside, it's that Chrome isn't very privacy-focused. Google wants to suck up your data and use it to make better services and personalize ads—if you want better privacy, you'll have to run extensions that block scripts and web tracking. Chrome is often derided for being a bit of a resource hog and not as battery-efficient on MacBooks, too.

Firefox is one of the oldest browsers still kicking around, and has experienced something of a resurgence lately thanks rapid updates and a renewed focus on improving speed and reliability.

Recent updates have improved battery life on Mac laptops (often a sore spot for non-Safari browsers). Firefox is also greatly concerned about privacy—it's got pretty good built-in tracker blocking, and its password syncing relies on locally encrypted files. Firefox enjoys a large collection of extensions, though not nearly as many as Chrome. They're less about turn your browser into its own OS and more about just customizing your web experience. 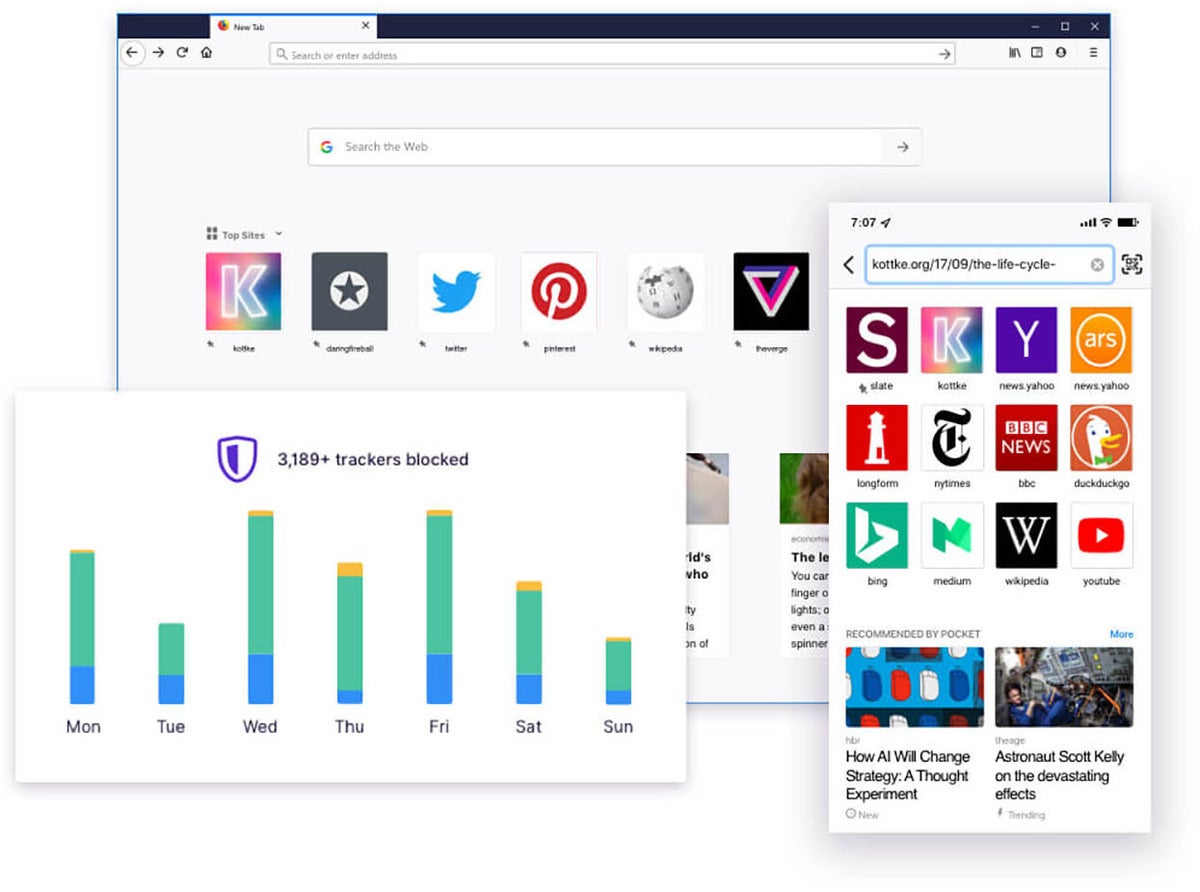 Firefox is focused on blocking trackers and providing privacy-minded features.

Firefox launched M1 support with version 84 and it claims it's over 2.5 times faster and web apps are now twice as responsive than the non-native version. Firefox was already incredibly fast, so the speed benefits aren't quite as noticeable as they are on Chrome, but it's definitely snappier than it was before.

Firefox has an iOS version that works well if you want to sync bookmarks and saved login information. Of course it can't use the Gecko rendering engine that the desktop client uses (due to Apple's rules), but it's a good mobile experience that supports Dark Mode and gives you all the tracking prevention and privacy of the desktop version.

Another ancient browser still getting regular updates, Opera has gone through a lot of changes over the years. While it once ran its own web rendering engine (called Presto), it transitioned to the Chromium engine years ago and never looked back.

Opera's biggest claim to fame is its free built-in VPN. While not everyone needs such a thing, it's probably good to have on public networks like coffee shops. There are no data limits but performance can vary widely, so while it may reduce your vulnerability to snoops on public Wi-Fi networks, it's not necessarily a great tool for, say, watching Netflix selections from other countries. 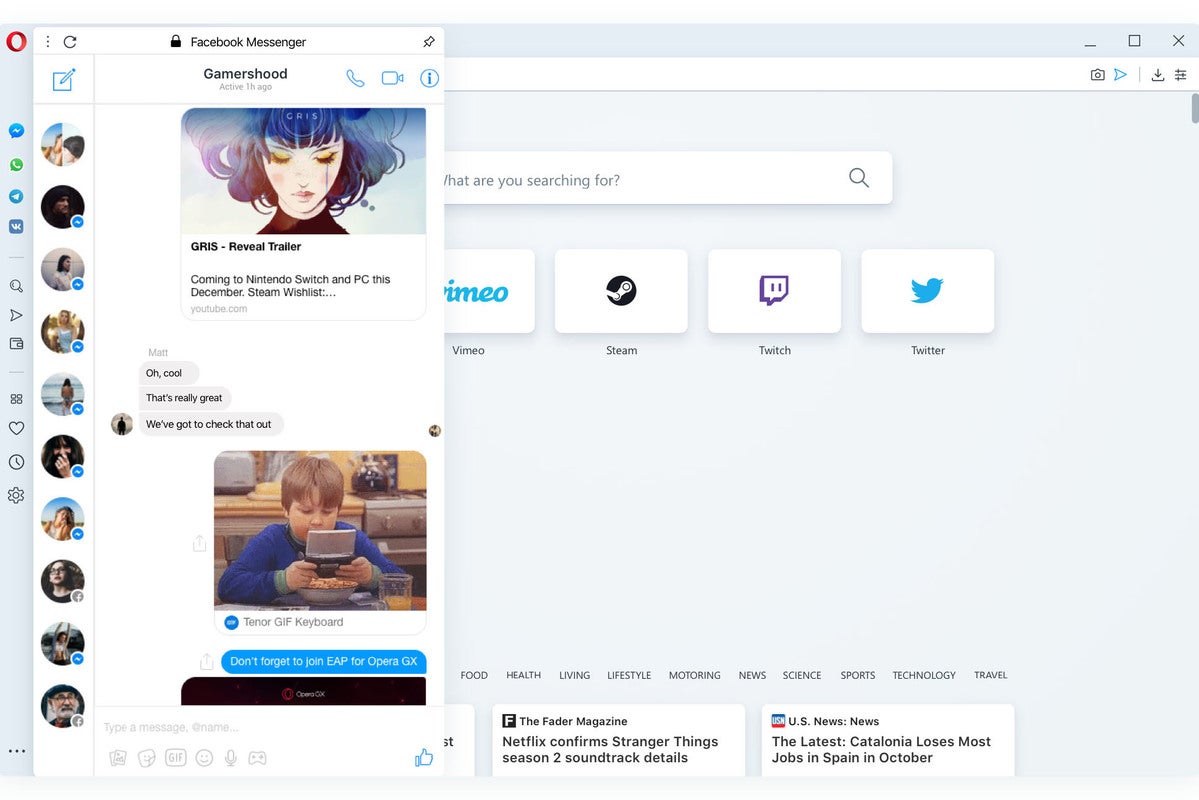 Among Opera's unique features is a built-in messaging sidebar.

That's not the only trick up Opera's sleeve, though. It can pop out videos from webpages, has a built-in ad blocker, and there are integrated messaging clients that can connect to Facebook Messenger, VKontakte, and WhatsApp. There's a nice battery saver feature that reduces background tab activity and pauses some plug-ins and animations, too. Opera also has a respectable list of extensions, but since it's based on Chromium, many of the Chrome extensions work just fine, too.

The M1 version of Opera launched in April 2021 and Opera claims it runs 2 times faster compared to the previous version of our browser. You can also set custom shortcuts for Opera's Flow feature, which is essentially end-to-end encrypted chat with Opera on your other devices for quickly sending pictures, links, and files.

If you want to sync bookmarks and tabs with your iPhone or iPad, there's Opera Touch, which like all iOS browsers, uses Apple's own WebKit rendering engine. It has a built-in ad blocker like the desktop app, but no longer includes a free VPN.

After years of going its own way, Microsoft switched its Edge browser to the Chromium engine and joined the open-source consortium that develops it. Along with the change comes a version for Mac.

It's…fine. There aren't a ton of unique features, but not everybody needs that. One of Edge's best features is its tracking prevention, which has three settings: Basic, Balanced, and Strict. It's nice to see an approach that isn't just all-or-nothing. The webpage collections feature is perhaps its most unique, and makes it easier to use web content in Microsoft Office documents. 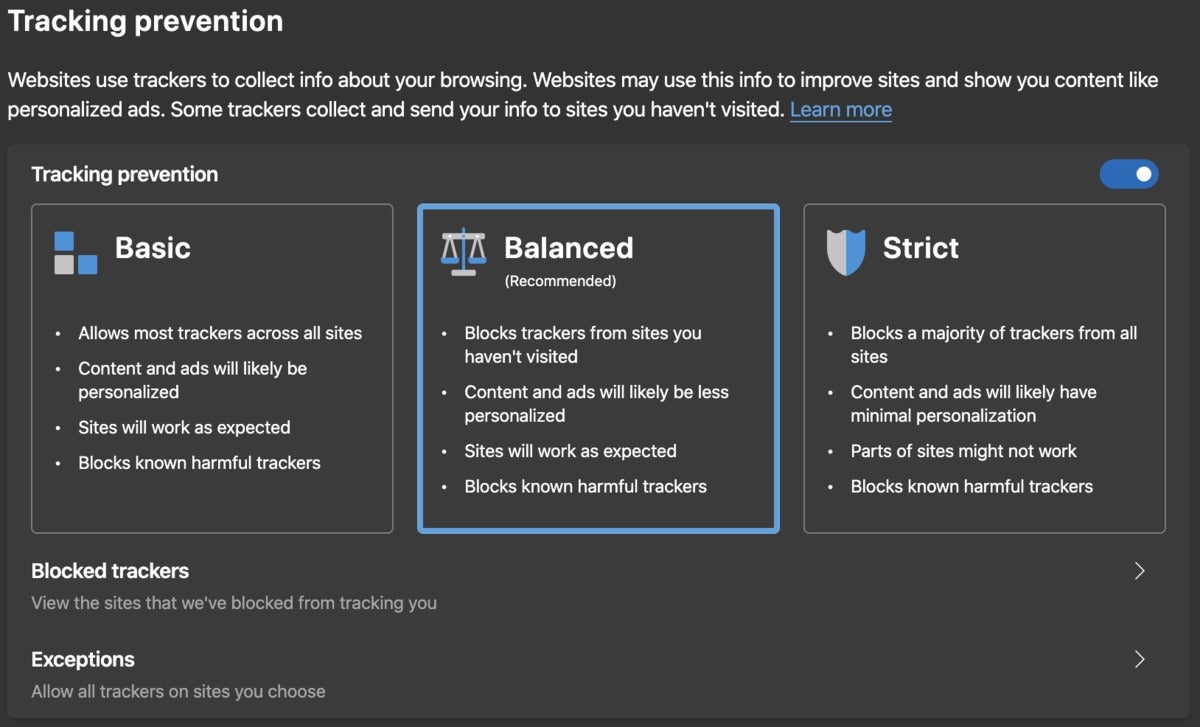 Edge lets you set the degree of tracking you want to allow or block—it's not all or nothing.

The new Edge works with most Chrome extensions, which is a big step up from the old Edge browser's paltry selection. And there's an iOS version that can sync your bookmarks (Microsoft calls them favorites) and saved passwords, but your browser history and open tabs yet sync between devices. That is said to be on the way later in 2020.

Microsoft jumped on the M1 bandwagon in February 2021 with a build optimized for Apple's new silicon. Since it uses the same engine as Chrome, the speed benefits are in line with Google claims—but strangely you'll need to use Rosetta to run the installer. There's nothing wrong with Edge, but there's little reason to go out of your way to use it unless you regularly work on a Windows PC and have to use the Edge browser there. Something like Chrome or Firefox is probably a better cross-platform choice for most users.

Brave is an interesting experiment in browser technology. It's based on Chromium and really looks and feels more like Chrome than most browsers. If you're used to Chrome, you'll feel at home with Brave, and you can use almost any Chrome extension. It launched an M1 native version in December and is often faster than Chrome due to its core principles: privacy and security. Brave's rather extensive built-in ad- and tracker-blocking greatly speeds up page loading, but it can sometimes break websites and, of course, it robs them of revenue. It's easy to turn shields down for a site if you need to.

Brave can show you its own ads as notification pop-ups, for which you'll earn a currency called BAT (Basic Attention Tokens). You'll also earn them at a lower rate just for browsing the web. These tokens are then used to pay out participating sites and to pay you, the user. You can turn them in for real money, or to tip websites or content creators. 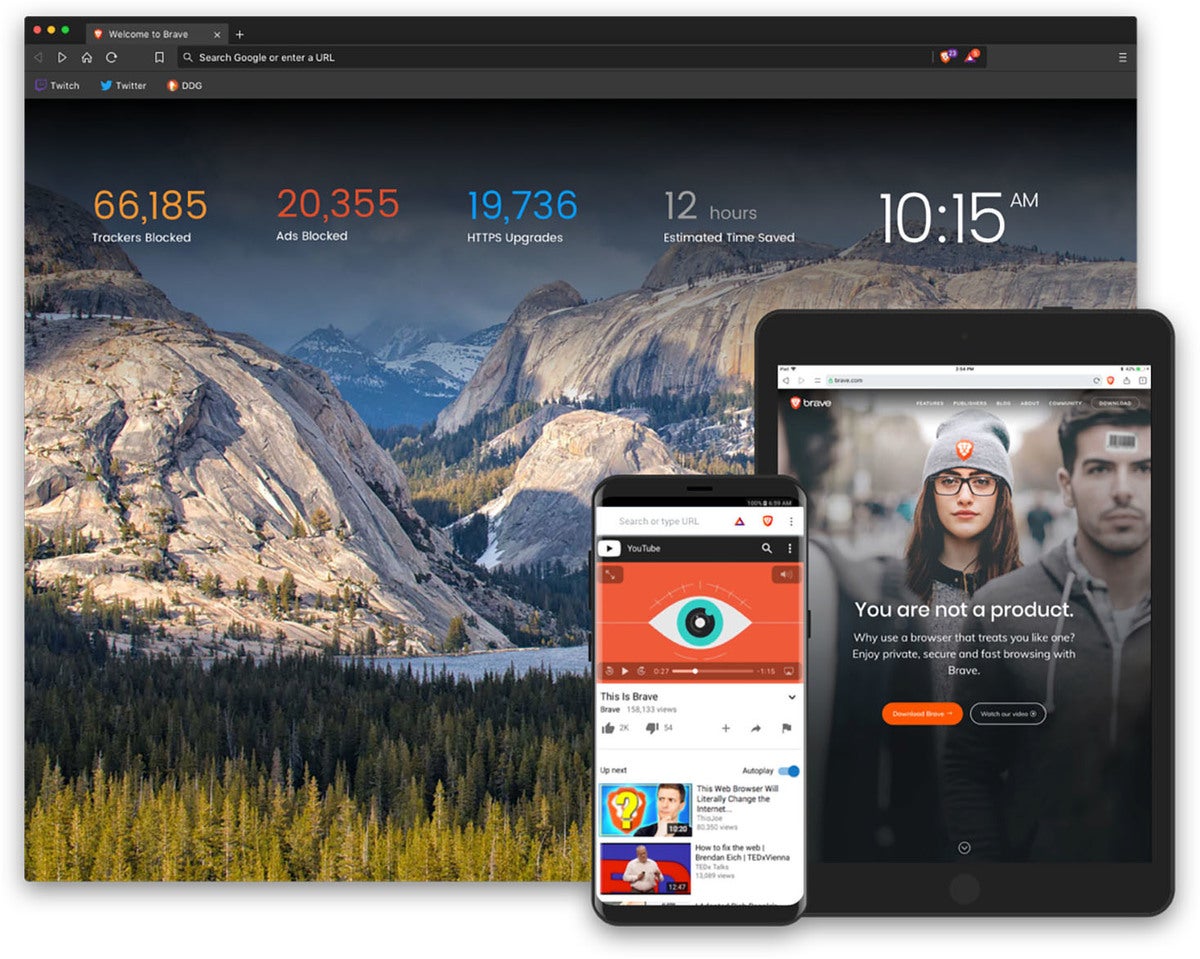 Brave aggressively blocks ads and trackers, and builds its own ad-based web economy instead.

It's a novel idea, but it's a little annoying to sign up for the whole Brave Rewards program, and even more annoying to link the account with the third-party Uphold service in order to actually turn BAT into money. And it's useless to any website or creator that doesn't similarly sign up to be a part of the revolution.

Brave has an iOS app loaded with privacy features (HTTPS everywhere, script and tracker blocking, pop-up blocking). And there's a nice bookmarks syncing feature that doesn't even require you to make an account and log in. Unfortunately, the sync function only currently supports bookmarks—not open tabs, history, passwords, autofill, or your BAT earnings.

Even if you don't care about BAT, you'll find Brave to be a very fast Chrome-like browser that puts a very high priority on privacy and security. It just needs a more robust sync system.