You probably think you've mastered iOS 14 by now, but there's a lot more than the App Library and picture-in-picture videos. There's so much, in fact, some of iOS 14's best features aren't the ones Apple pops up tutorial cards for. They're buried layers deep in Settings or hidden behind interface actions you don't make every day. Some of the best stuff in iOS 14 you wouldn't know about if someone didn't point it out. Hey, we're someone! So allow us to point out some of our favorite lesser-known and hard-to-find features of iOS 14.

Originally a feature in the iOS 13 beta, the ability to choose different default email or browser apps was eventually pulled before release. It's back in iOS 14, though. The default a browser and email settings are found in each particular app's settings. Open Settings, scroll down to the app in question (say, the Chrome browser) and select it. Then select Default Mail App or Default Browser App and change it.

When you open a web link or an email link anywhere on your iPhone or iPad (in a text message, for example) it will now open the app you chose instead of Safari/Mail. 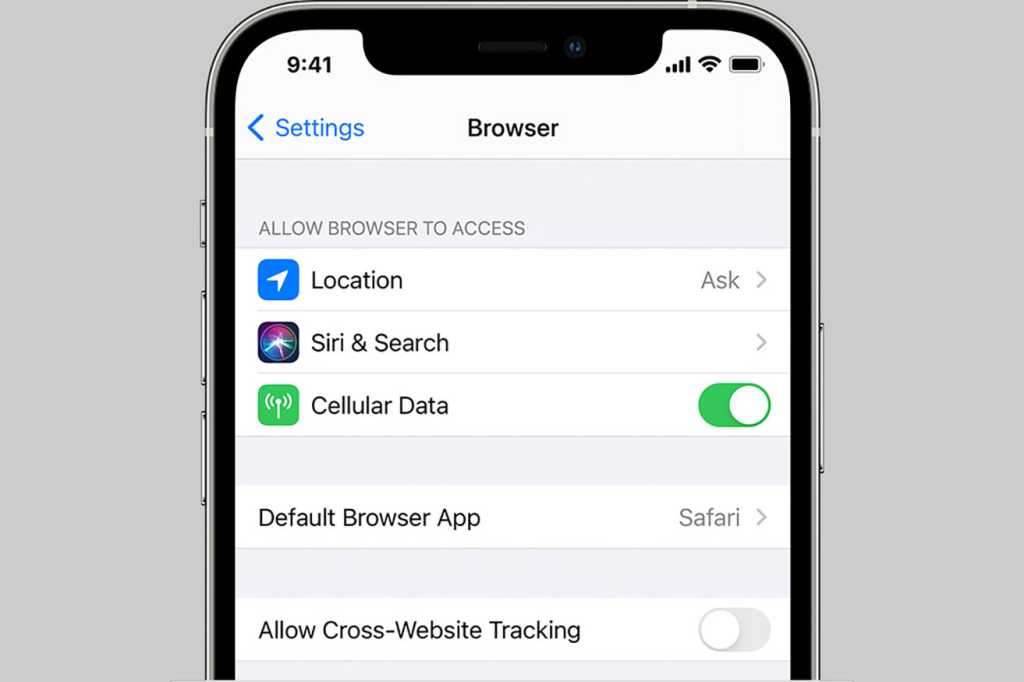 You can now select third-party apps as your default email and browser app.

Banish new apps to the library

New to iOS 14 is the App Library, a place where all your iPhone apps live, allowing you to keep only your most important apps on the home screen. But when you download new apps, it still puts an icon on your home screen, which means you have to clean it up manually.

You can change this behavior by opening Settings, then Home Screen, and choosing for newly downloaded apps to appear on App Library Only. 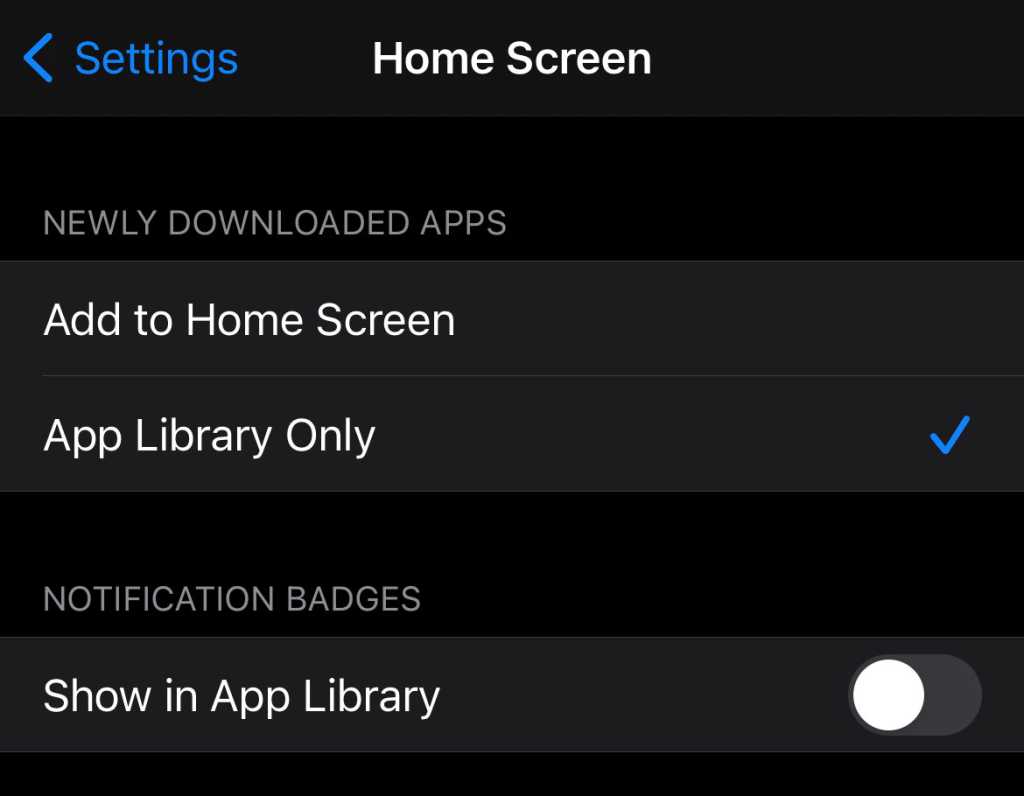 You can prevent newly download apps from appearing on your home screen.

In the iOS 14.2 update, Apple gave us the ability to add a Shazam button to Control Center. Open Settings, tap Control Center, then add the Music Recognition feature to your list of available controls. Tap the button in Control Center and Shazam will listen in the background, sending you a notification when it recognizes a new song. 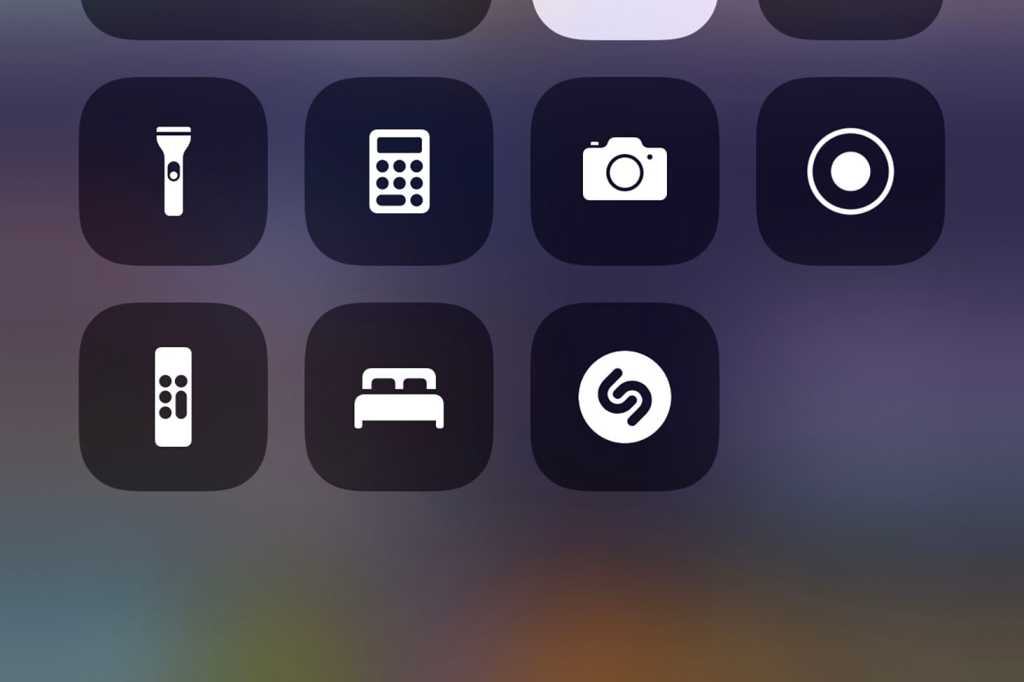 Get clearer sound in your AirPods

If you open Settings > Accessibility > Audio/Visual, you'll see a new setting up top for Headphone Accommodations. This menu allows you to tweak the sound output on supported Apple and Beats headphones to bring out vocals more or make the sound brighter.

A custom audio setup function will run a series of A/B tests to help you hone in on just the right settings for you. 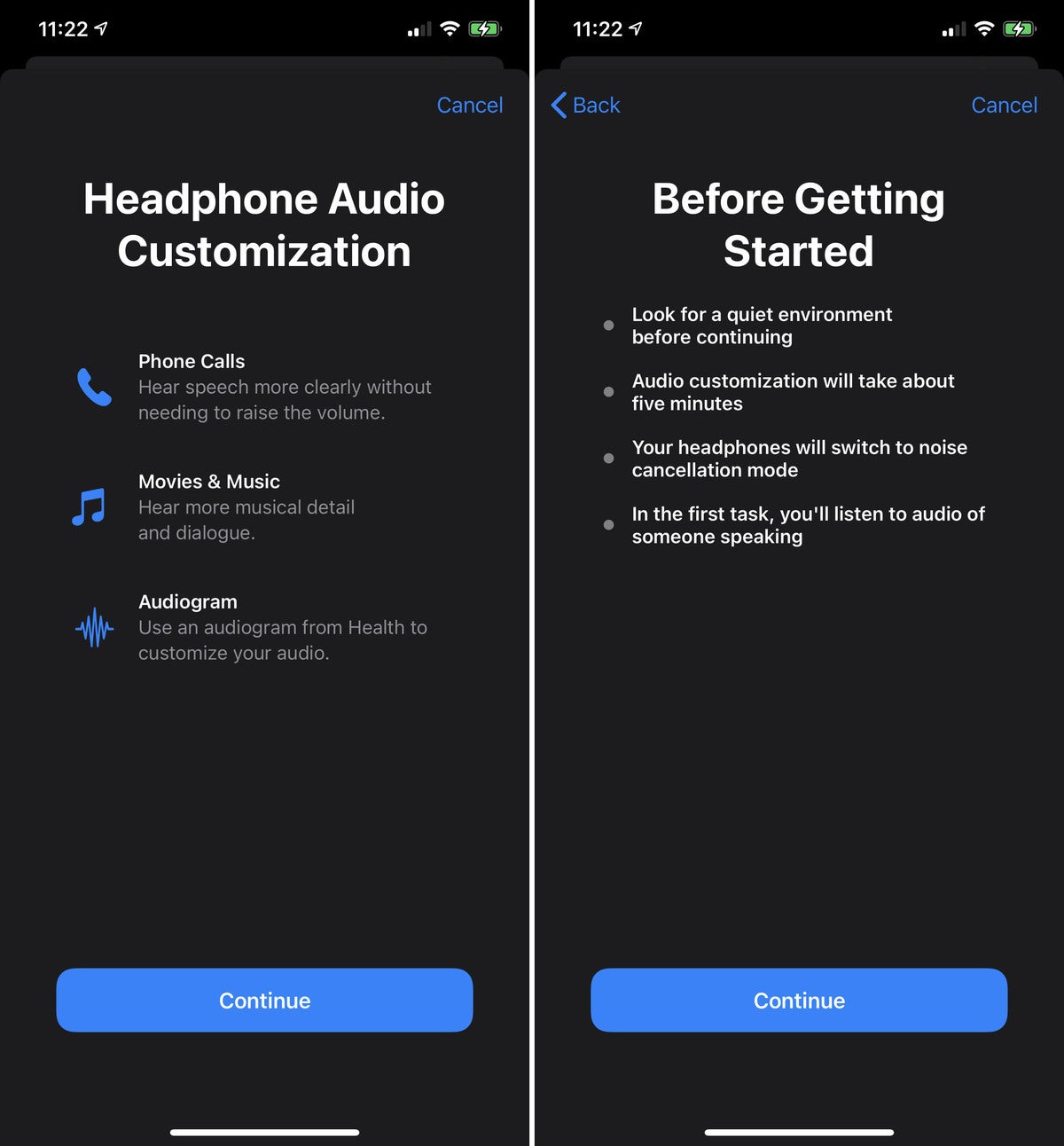 Even if you're not hard of hearing, running through the Hearing Accommodations setup can make your AirPods sound better.

While this is intended to be an accessibility feature for those who are hard of hearing, it's going to really improve sound quality for millions of people. As you age, you lose sensitivity to high frequency sound, and these settings can help restore that when you listen to music, watch video, or talk on the phone.

Add a secret back tap shortcut 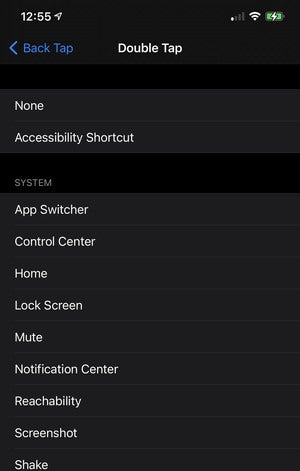 Double- or Triple-tap the back of your iPhone to launch a variety of system functions, or even Shortcuts.

Another accessibility settings that everyone might find useful, iOS 14 allows you to set specific functions to a double-tap or triple-tap on the back of your iPhone.

Head to Settings > Accessibility > Touch and look for Back Tap at the bottom of the screen.

There's a set list of system and accessibility functions you can assign to double or triple taps, but you can also assign Shortcuts to them, which opens up the feature to all kinds of powerful capabilities.

Here's a neat trick: with the Google Assistant app installed, you can create a Shortcut to invoke it, and then set thatShortcut to a double- or triple-tap.

Find out where you've been 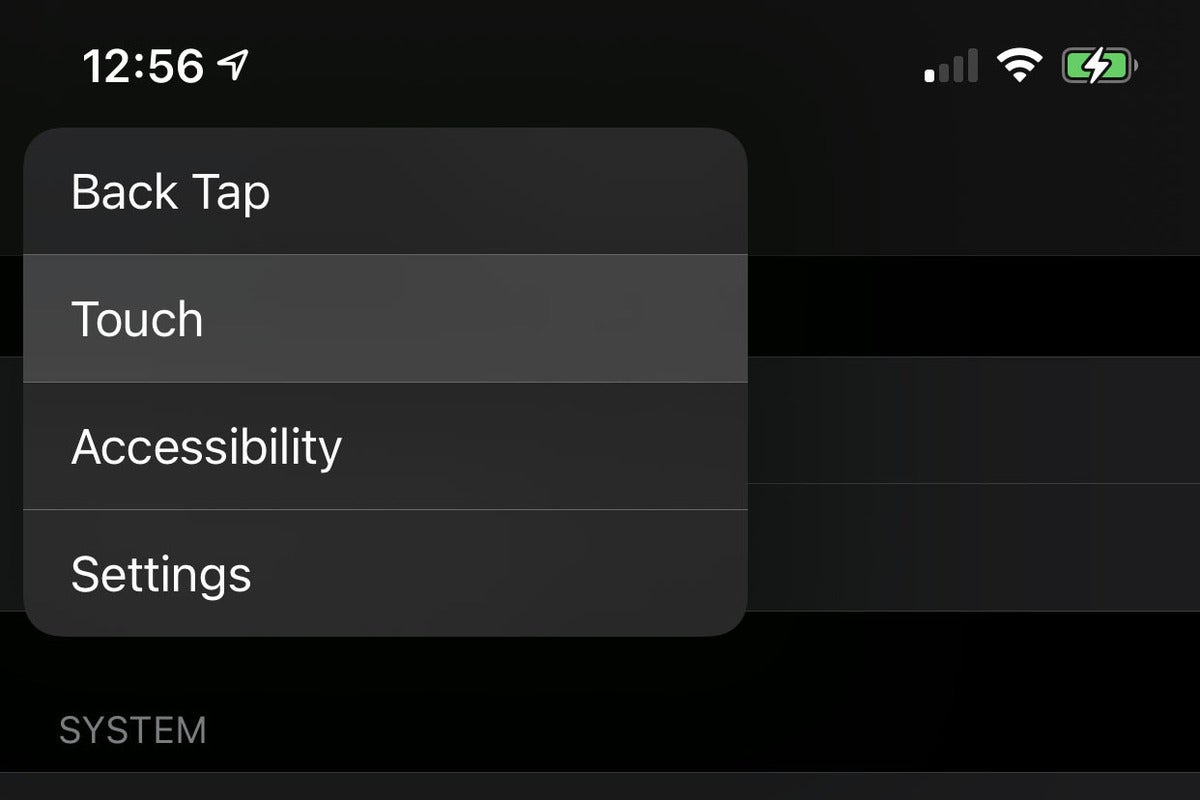 Long-press any back button in a menu to see a list of all previous menu screens.

With iOS 14, you can press and hold the standard upper-left Back button to get a breadcrumbs list of all the previous pages. Safari has long had this function on its Back button (in the lower left); you can think of this as Apple applying the same interface convention throughout iOS.

Keep tabs on trackers in Safari

When you open a new tab in Safari using macOS Big Sur, you see a neat privacy report where Apple shows all the trackers it has blocked for you.

This exists on your iPhone with iOS 14, too! With Safari open, on any page, tap the text/font/reader button on the left side of the navigation bar. At the bottom of this list, you'll see Privacy Report. 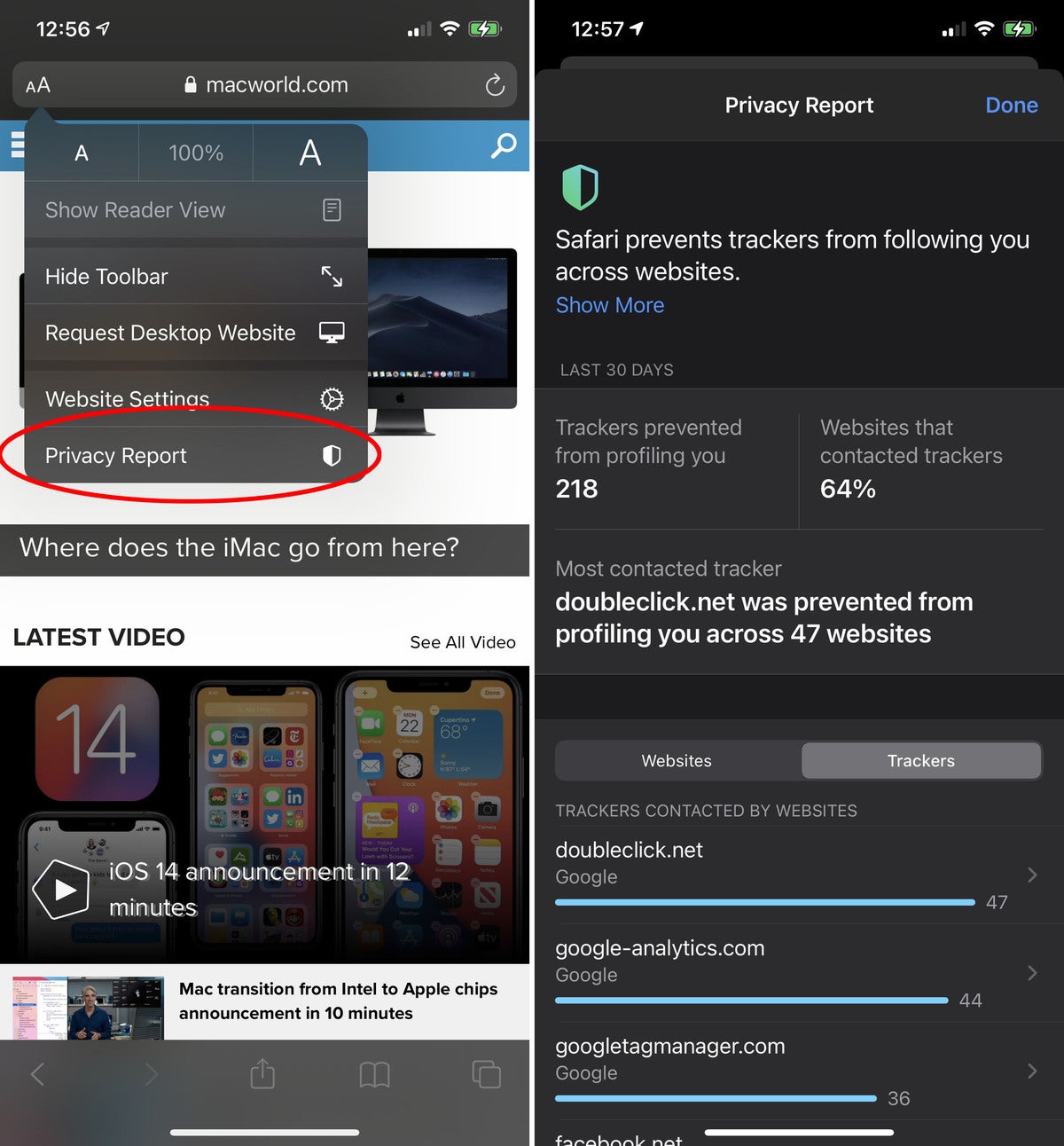 Safari's Privacy Report lets you know just how many trackers it's blocking.

As with Safari on macOS Big Sur, this shows the total number of trackers prevented by Safari, the websites with the most trackers, and the trackers you've encountered most often. It's a great overview of just how often your activity, and even identity, is being passed around online and just how often Safari stops that.

By default, the front-facing camera on the iPhone shows you a reversed image—text appears backwards, and things you do on your right happen on the right side of the screen. 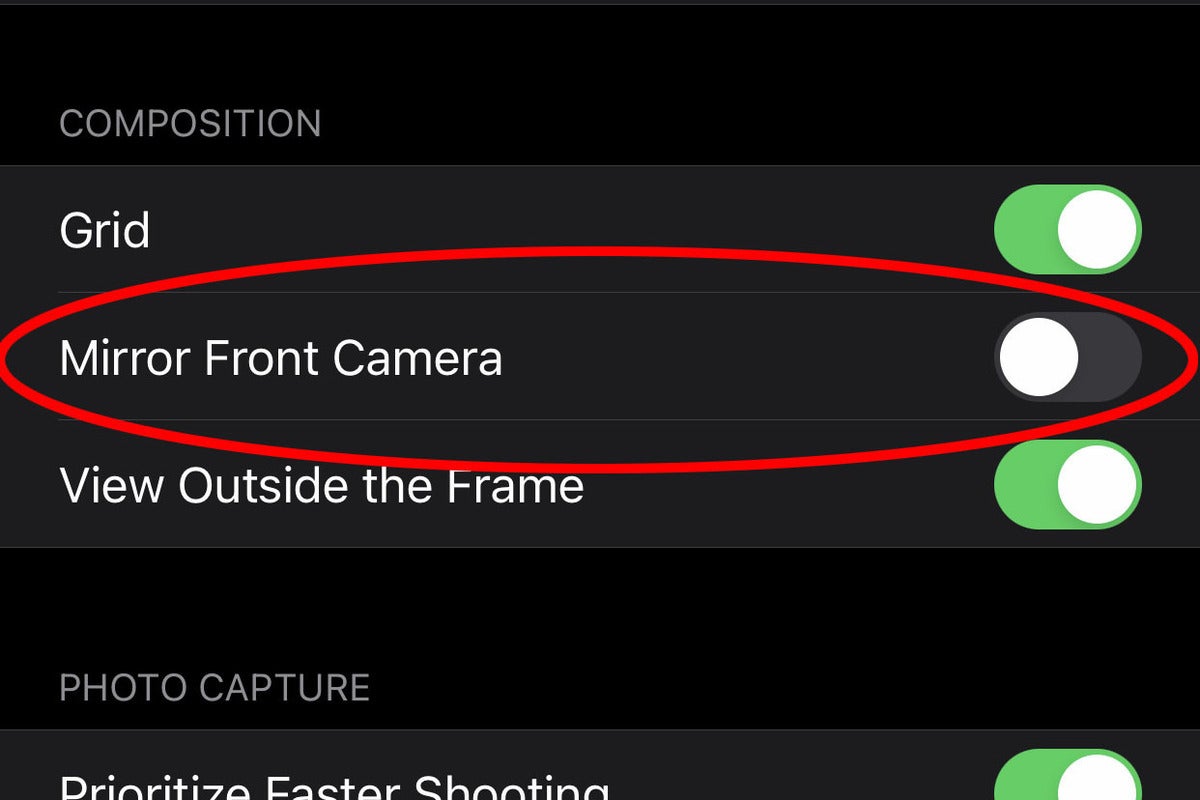 You now have the option to save a selfie that is mirrored, just as it appears on screen in the Camera app.

This is more intuitive for setting up a shot, but it looks weird, so the actual photo you take is not mirrored. It is taken as if you were standing where your phone is, looking at your subject (usually yourself): text is not reversed, and anything on the left side of your body is on the right side of the picture.

If you'd like to capture exactly what you see on your screen, backwards text and all, you can now do that! Just open Settings > Camera and toggle the new Mirror Front Camera toggle.

iOS 14 introduced a new FaceTime feature that's a little creepy and a little amazing. Using a bit of AI magic, the iPhone will automatically make it look like you're looking at the screen, even when your gaze is diverted. It's called Eye Contact and it's switched on by default, but if you'd rather keep natural eye contact, you can easily switch it off. 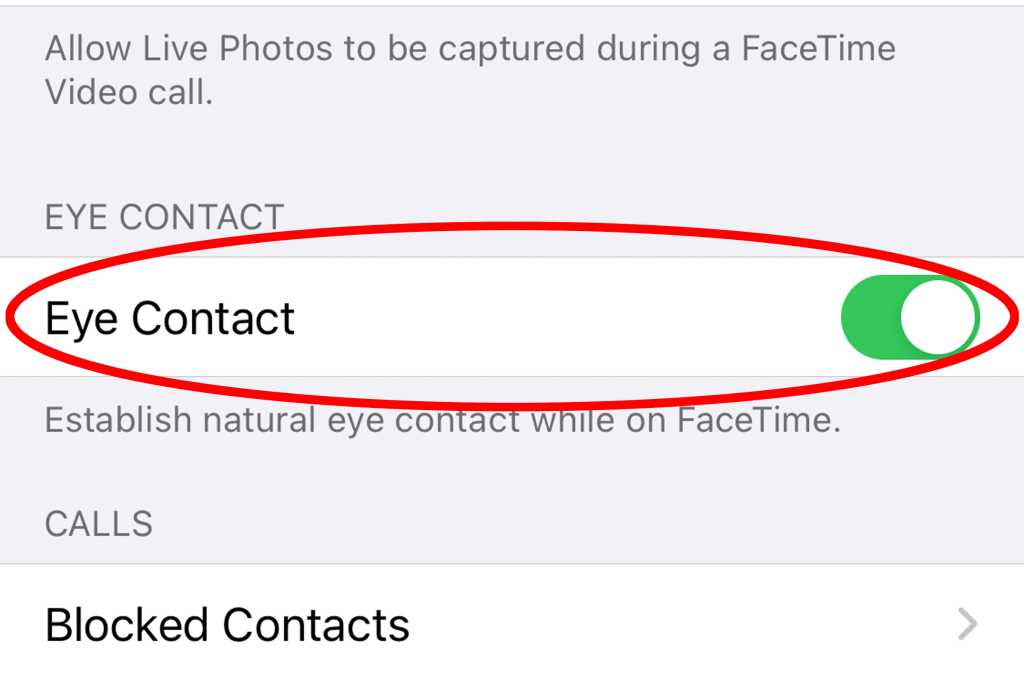 Head over to the Settings app and scroll down until you find the FaceTime tab. Open it and scroll down to the Eye Contact toggle and switch it off. Just don't be surprised if people start asking why you're not paying attention to them as much as you were.

Updated 04/03/21: Added a few additional hard-to-find settings you should know about.