WD's Black_D50 gaming dock may not be aimed at Mac users, but it still does a great job expanding ports and storage options–including a fast NVMe SSD inside the dock.

If there's any reason to complain about modern MacBooks (especially the new M1-based models), it's the dearth of integrated ports. For all but the lightest duty use, getting a dock to increase the connectivity options borders on necessity.

While WD markets the Black_D50 reviewed here as a Thunderbolt 3 gaming dock, and the styling might not be aimed at Mac traditionalists (a gross understatement), it's an exceptionally capable dock, increasing the number of ports and providing very fast NVMe storage.

The D50 is a squarish box measuring 4.72-inches high, by 4.72-inches deep, and 2.17-inches wide. It's a powered (required) dock so you can use it with Apple's Thunderbolt 1/2 to Thunderbolt 3 adapter. As to said power, the D50 has a rather prodigiously-sized 180 watt/19.5-volt brick, which is not shown or mentioned on the product page—it measures approximately 6-inches long, by just under 3-inches wide, by slightly less than an inch thick. It's also a bit weighty at around 10 ounces.

The size of the dock and the size of the power brick means that you'll want to leave the D50 on your desk and not drag with you on the road. Unless it's a cross-country trip with plenty of room in your car's trunk, of course. 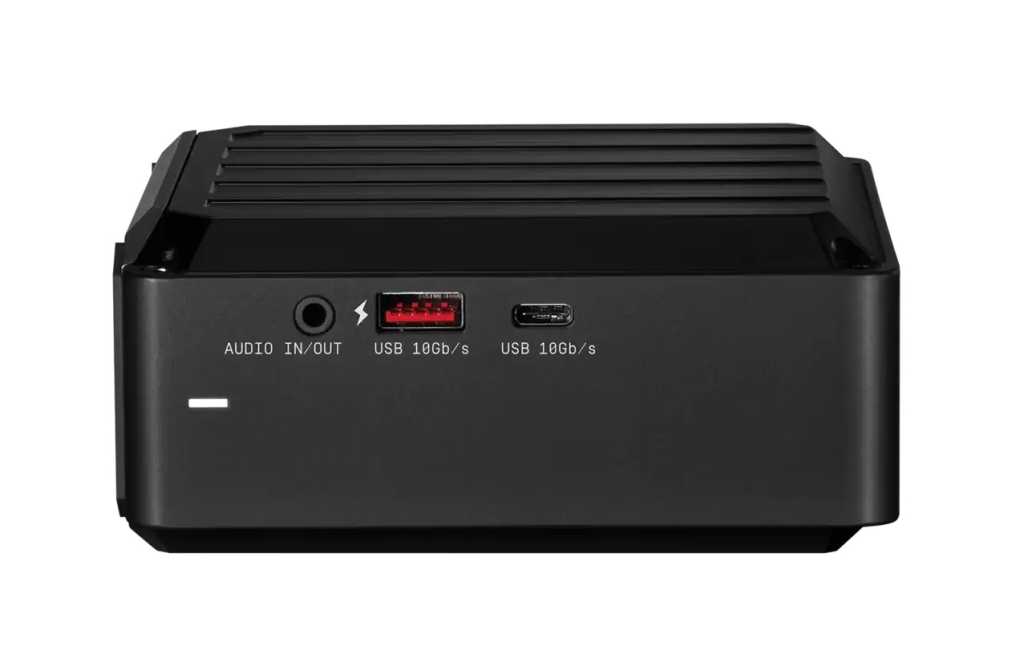 The front of the WD Black D50 laying on its side. Its most stable position.

The D50 is styled in WD's pseudo sci-fi/military theme for its Black series. It's designed to attract gamers, but the look isn't so over the top that it's a turn off. Actually, ditch the lettering on the outside and it's far less SyFy—okay, the RGB lighting at the bottom might be a bit much (I like it, it's fun), but you can turn that off, or change it to a number of different schemes and colors.

Alas, the WD Dashboard software that allows you to control the lighting is for Windows only. If that makes you sigh and want to stop reading this review, I understand. However, it might be your loss because…

Few people will have any complaints about the selection, number, and placement of ports on board the D50—or its internal NVMe storage. On the back, along with the AC adapter jack, you'll find two Thunderbolt 3 ports (one fully powered for charging your laptop, etc.), a full-sized DisplayPort 1.4 port, a gigabit ethernet port, two USB Type-A ports and a USB Type-C port. All the USB ports are Gen 2, 10Mbps. That means you can get about 1GBps of throughput from external storage with any of them.

The lack of 2.5Gbps ethernet is a bit of a disappointment, and you might even bemoan the lack of 10Gbps ehernet, but I find that I rarely need that kind of speed. Also, 10Gbps ethernet sucks a lot of power and produces a lot of heat. 2.5Gbps transfers at over 300MBps using older Cat 5e cables, and runs far cooler. 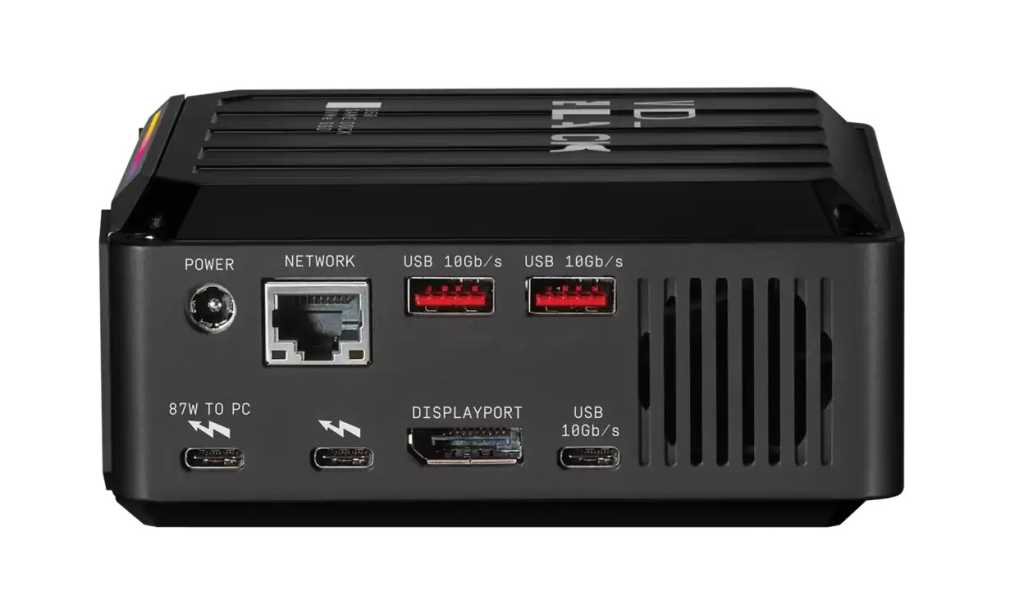 The back of the Black D50 dock has plenty of ports including three 10Gbps USB ports.

WD didn't forget convenience. On the front of the unit, you'll find both 10Gbps Type-A and Type-C USB ports, as well as a 3.5 mm audio in/out jack for headphones and headsets. Last but not least, there's an internal NVMe SSD that's capable of transferring data at around 3GBps. The $449 unit I tested features a 1TB WD SN730 inside, but you can up that to a 2TB SN730 for $599. (I never said the D50 was cheap.) It would be nice if WD sold the D50 unpopulated so you could leverage an existing drive, but hey, drive mechanisms are what WD does.

I tested the D50 on both a 2015 Core i7 (Skylake) 27-inch iMac and a new M1 Mac mini. The former used the aforementioned Apple Thunderbolt 1/2 to Thunderbolt 3 adapter, and the latter used one of the two native Thunderbolt 3 ports. I tested both the D50's internal SSD and an Samsung X5 attached to the second Thunderbolt port.

I also checked the gigabit ethernet and DisplayPort output (with an HDMI adapter), as well as using the second Thunderbolt port to drive the LG 24MD4KL-B Ultrafine display attached to the M1 Mac mini. All the ports worked as they should. Below you can see the SN730's performance on the M1 Mac mini. 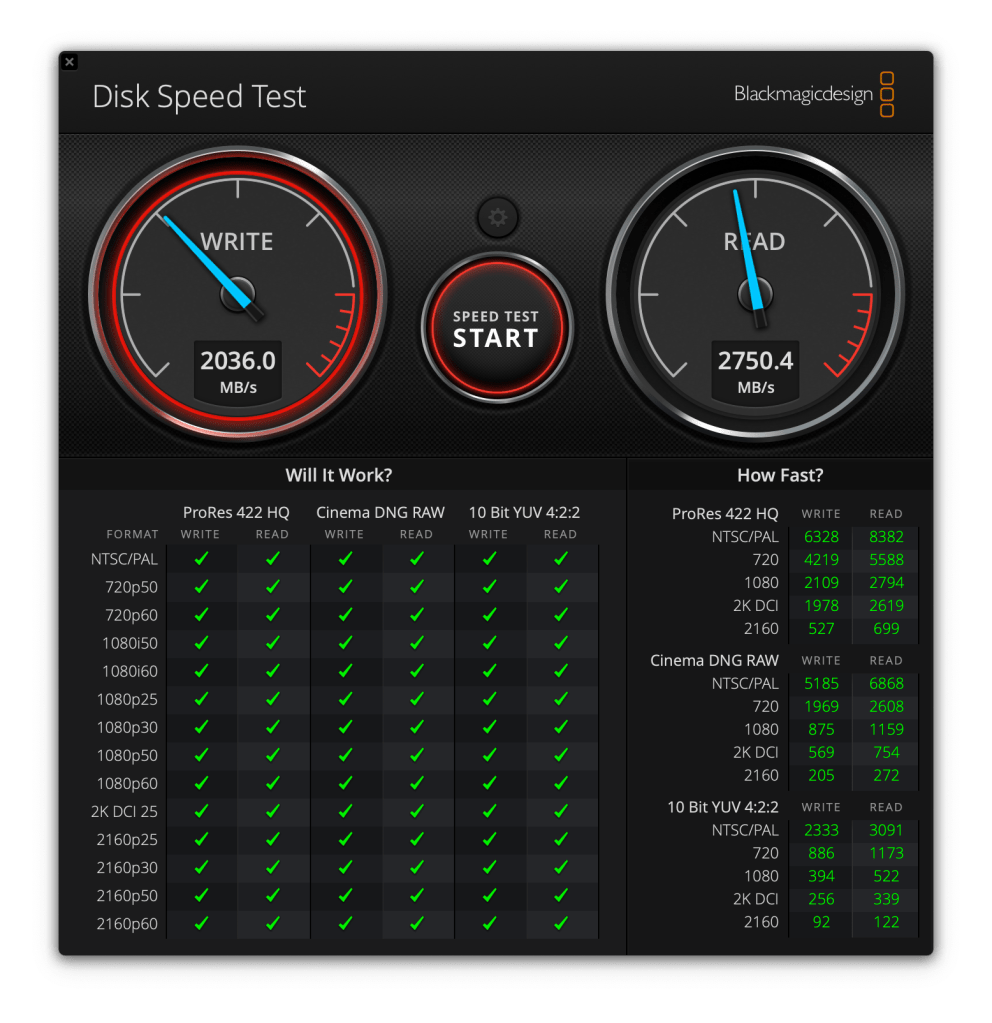 The WD SN730 NVMe SSD inside the D50 delivers very good performance on an Mac M1 mini. It should deliver the same performance on just about any Thunderbolt 3 Mac.

Note that in a fit of inspiration (and necessity), I tried installing Windows via Boot Camp to the D50. It didn't pan out, with the actual Windows install taking a hike after coping the install files to the install partition. In fact, the D50 caused problems with reboots during the Windows install process even when it was to other drives. I was finally able to install Windows 10 to an internal drive without the D50 attached. I'm not saying it's impossible to run Windows off of the D50, but I didn't have the time or patience to sort it out for this review. 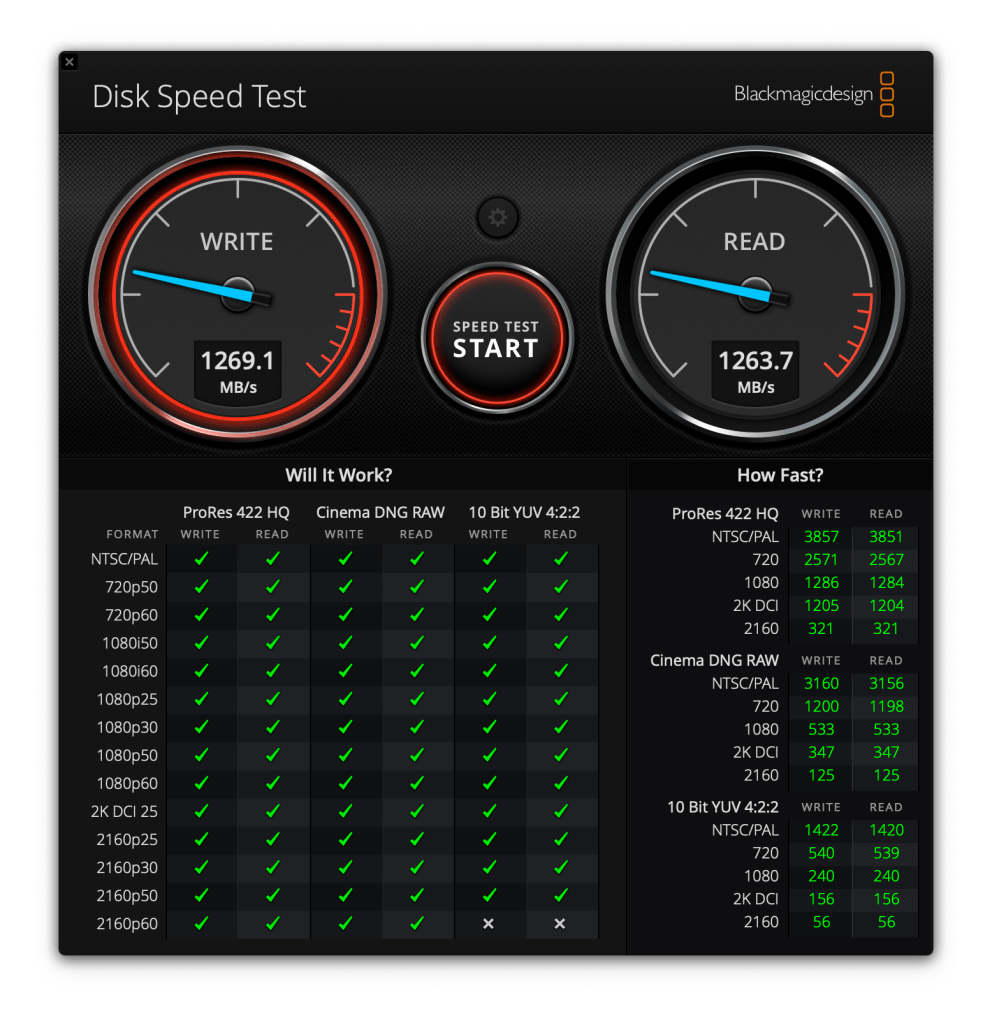 Obviously, Thunderbolt 2 was the performance limiting factor on my older 2015 iMac, but this is still nothing to sniff at. Seek times are still very NVMe-like.

Above is the D50/SN730's performance on my older 2015 Core i7 iMac. Obviously the older Thunderbolt 2 and Apple adapter were limiting factors, but I'll take that kind of performance any day. I'm running the aforementioned Windows installation off of an internal SATA drive (550MBps, with slower seeks) and it's more than fine. Not quite as snappy as macOS running off the internal NVMe SSD, but close enough.

The external Samsung X5 read at around 2600MBps and wrote at approximately 1600MBps via Thunderbolt. I also tested several USB 10Gbps drives which performed appropriately averaged around 900MBps reading and 800MBps writing. These were just ad hoc tests to make sure the ports were the speed WD claimed. Bottom line, the D50's internal storage is quite fast and its ports perform as advertised.

Though I'd appreciate faster 2.5Gbps ethernet and perhaps two more Thunderbolt 3 ports (as with OWC's Thunderbolt Dock), I found that WD Black D50 a marvelous adjunct for my computers. As a matter of fact, it's my favorite so far thanks to the internal storage. A very nice dock from WD that fills the bill, and perhaps provides a little fun. If you can't live with the clash in styles…c'est la vie.