ProtonVPN is an excellent service with fast speeds, the right privacy promises, a good amount of features including support for streaming services, and fair pricing. It's well worth a look.

ProtonVPN from Proton Technologies (the makers of ProtonMail) is an impressive VPN. It's accountable to its users by not establishing its business in some exotic location, and it has management that is easily discoverable. The app is also easy to understand, has a number of interesting features, and the speeds are awesome.

If you need a new VPN service I heartily recommend ProtonVPN for Mac users. It's not a perfect VPN, but it does an excellent job. For this review we tested using the ProtonVPN Plus plan.

Note: This review is part of our best VPNs for Mac roundup. Go there for details about competing products and how we tested them. 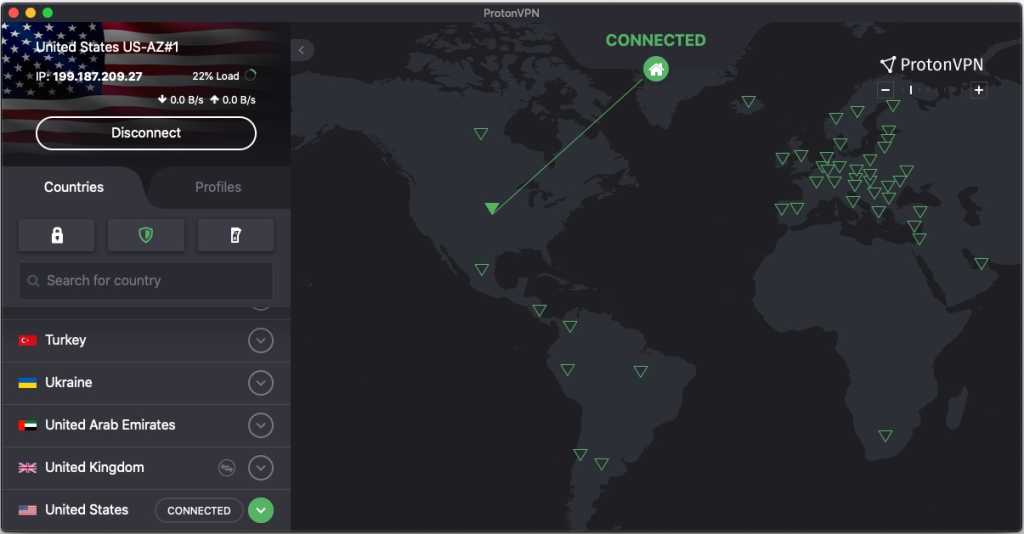 ProtonVPN runs on OpenVPN with data encryption handled by AES-256, authentication users HMAC with SHA-256, and the handshake is based on 2048-bit RSA. There are no options for other protocols including WireGuard; however, the company may introduce WireGuard integration at a later date. ProtonVPN has 55 country options to choose from and more than 1,200 servers.

ProtonVPN's privacy policy says it's a no-logs VPN with no tracking of user traffic or online activity, IP addresses, or session lengths. It also doesn't block any type of device, protocol, or application, and it doesn't throttle internet connection speeds. It does, however, log in aggregate the geographic distribution of the service's users. It uses this information to maintain quality access to its service and mitigate any connection or access issues in a specific country. ProtonVPN's Secure Core servers are not diskless, but they are fully encrypted. The company also regularly undergoes third-party auditing, and all of its apps are open source.

When you first open ProtonVPN, you're greeted by a left rail that features a country list and a few other settings, with a large map in larger panel on the right. You can use this map to zoom in on specific locations and select where to connect. The left-rail, however, is a little simpler to use. One click of the button and the map disappears to show a single panel app. 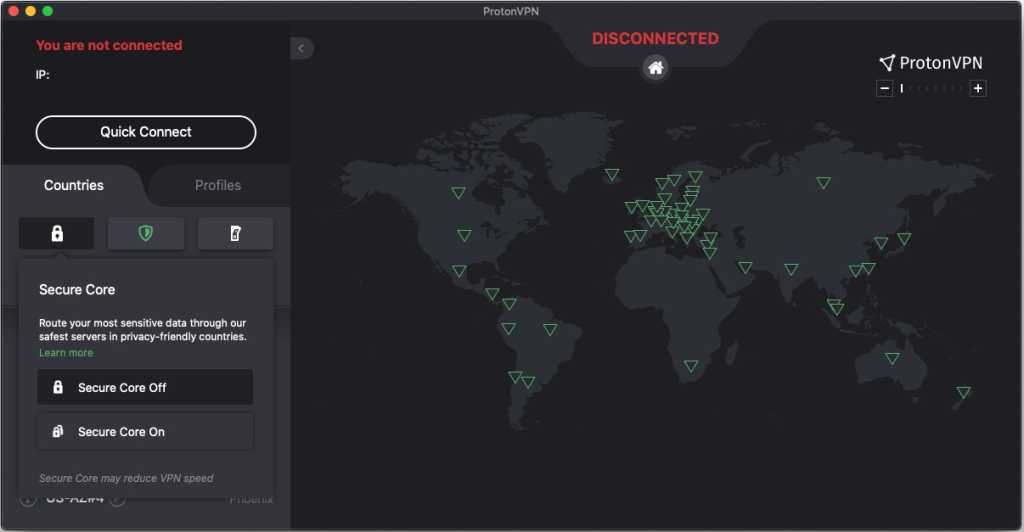 Here we have two tabs: Countries and Profiles. The first lists all 55 country options ProtonVPN supports. There are also three tiles that can be activated with ProtonVPN's added features. The first is Secure Core, which is kind of like a double-hop VPN but one focused on strategic security and privacy.

Secure Core routes all traffic through servers in either Iceland, Sweden, or Switzerland before hitting your country of choice, such as the U.S. The idea with Secure Core is to go through a server in a more privacy-respecting country first. Then once your web activity is hidden in one of these countries, you can go into less privacy respecting countries. In the U.S., for example, it's possible for law enforcement to monitor a VPN network from behind the scenes to reveal the identities of its users. Law enforcement can do this while compelling the VPN service to remain silent about what's happening. Someone using Secure Core, however, would appear to be coming from one of the three countries to anyone monitoring the network.

The company says it owns all its own Secure Core servers, which are shipped directly to the data center from its offices.

After Secure Core, the next option under the Countries tab is NetShield. This is ProtonVPN's malware and tracker blocker. By default, NetShield is only set to block malware, but you can easily set it to block ads and trackers as well. There's also an option to not block anything. The last button is the internet kill switch option, which is turned off by default. When activated, the kill switch will stop all internet traffic if your VPN connection happens to drop. This measure tries to prevent your true location from being exposed in cases of accidental disconnection from the VPN network.

The Profile tabs is kind of like the favorites quick launch option on other VPNs. You can use this feature to specify specific connections such as a Secure Core connection that hits the open internet from the U.S., or you can set it up to use an onion router server in France. Anyone interested in using P2P file sharing could also set up a profile for that purpose using ProtonVPN's P2P servers. 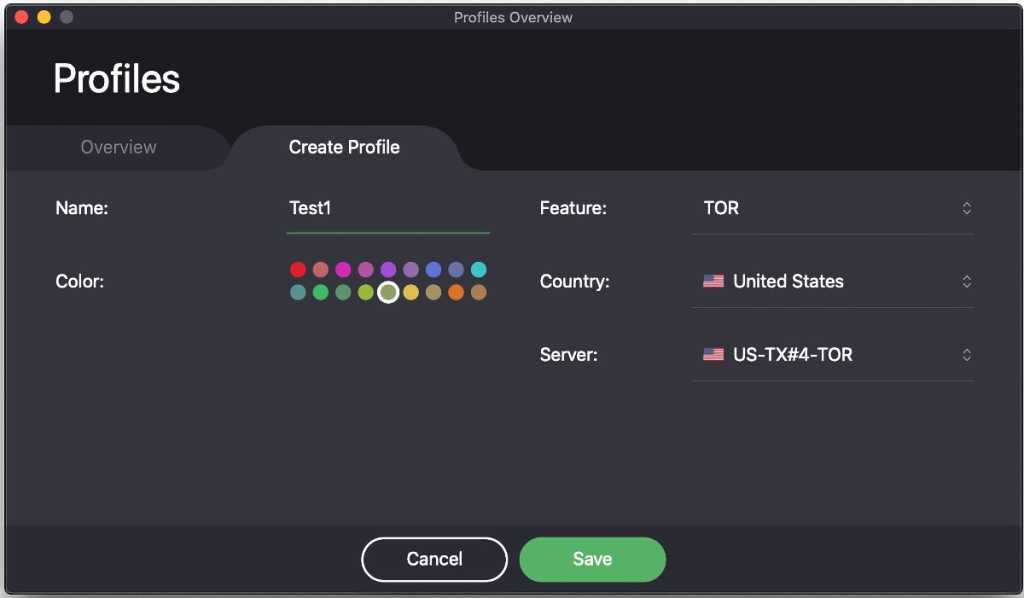 ProtonVPN has a preferences window where you can set the app to start on boot, connect automatically at launch, and turn off the DNS leak protection feature.

While there's a lot packed in to ProtonVPN, it's all pretty straightforward to use, and you can drill down to specific servers within each country if you want to. To the left of each server listing there's also an information icon that shows the current load allowing you to pick a less maxed out server. If you just click Connect next to a country name, however, ProtonVPN will pick the best server it can find in that country based on speed and load.

ProtonVPN works with Netflix and other streaming services. There were a few occasions where Netflix didn't work, but choosing another server usually corrected this. That's life in the cat-and-mouse game between VPN services and Netflix.

In our tests, ProtonVPN was fast. I tried ProtonVPN using the ad blocker and without. In all cases, ProtonVPN was fast maintaining around 61 percent of the base speed based on multiple locations and multiple days of testing. That is simply excellent and makes ProtonVPN the fastest VPN we've tested on macOS beating out NordVPN by about 5 percentage points.

ProtonVPN starts with a free tier with very limited features. It supports one simultaneous connection, servers in just three countries, and slower servers. None of the extra features that make ProtonVPN great come in this package. On the upside, the free option does not have a data limit like competing free plans do.

Next up is the Basic plan for €48 per year that offers 2 simultaneous connections, full access to all country locations, and high speed servers. It also adds NetShield and P2P support. 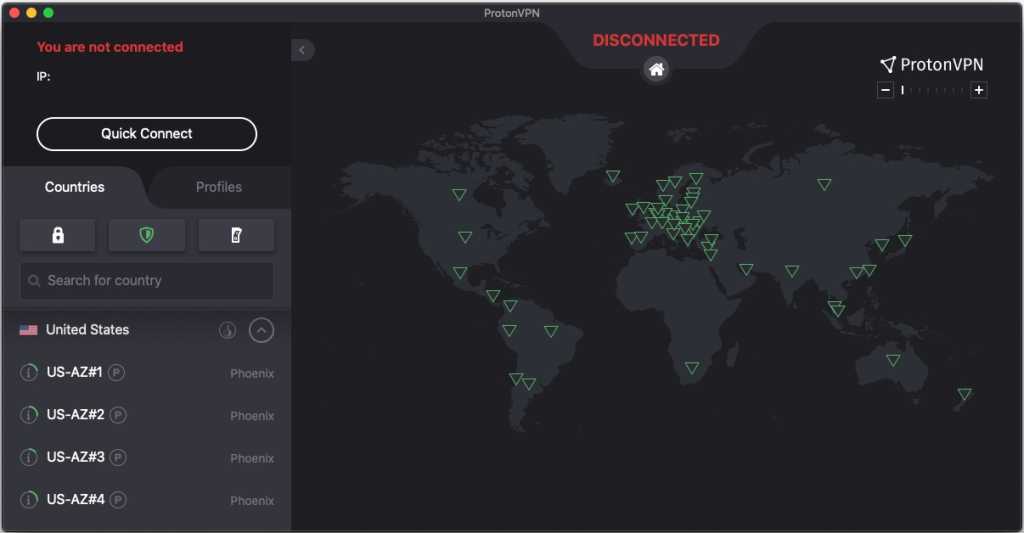 Then there's the Plus plan for €96 per year. This is the best value and is close to the pricing of a service like NordVPN. With this plan you get 5 simultaneous connections, the fastest possible servers with 10Gbps uplinks, and all the features mentioned in this article.

Finally, there's a Visionary plan for €288 annually. This package adds all the aforementioned features, supports up to 10 simultaneous VPN connections. In addition you get a Visionary ProtonMail account that supports up to 6 users, 20GB of storage, 50 email addresses, 10 custom domains, and priority support.

ProtonVPN is an excellent service with fast speeds, the right privacy promises, a good amount of features including support for streaming services, and fair pricing. It's well worth a look.