Malwarebytes Privacy VPN does a good job, the price is right, and it comes from a respected name in security based in the U.S.

Which company can you trust? That is the essential question when it comes to VPN services. Some critics would say you can't trust any of them, but that's an easy answer that is almost certainly false. One approach is to trust a larger, well known company in the security space. That way if there any issues it's easier to hold the company accountable (since you know where they are).

One such company that fits that bill is Malwarebytes, which offers a standalone VPN service called Malwarebytes Privacy. This service doesn't offer a lot of complexity, but it uses a modern VPN protocol, the app is easy to use, and the privacy promises are right. 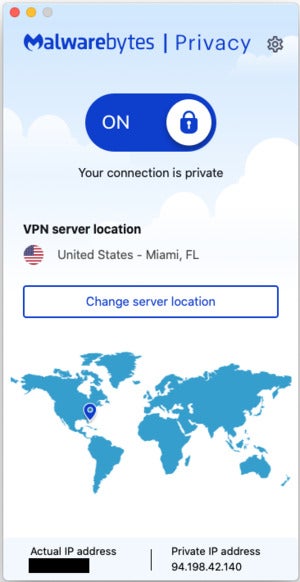 The privacy policy is clearly written and spells out what it collects and why in an easy-to-read format. Malwarebytes says it creates a unique identifier for your device when you install and activate the service to validate license use. It also identifies the version of Malwarebytes Privacy you're using. Malwarebytes says it does not collect your browsing history, DNS requests, bandwidth usage, your IP address, telemetry data from the app, or application logs. Malwarebytes is based in the U.S., and the CEO is co-founder Marcin Kleczynski.

There's also a settings cog towards the top with almost nothing to tweak save for an option to Trust local devices on your home network such as printers.

Overall, the Malwarebytes Privacy app for Mac is easy to use and understand. There aren't a lot of extra features but it should satisfy most users looking for a straightforward VPN. 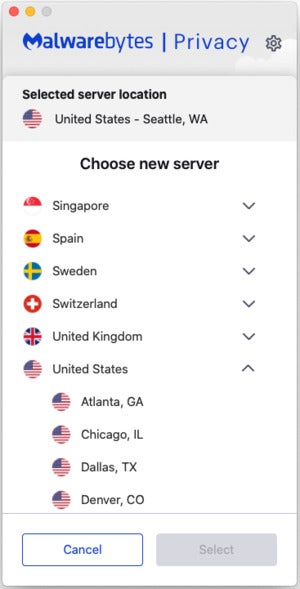 Malwarebytes Privacy costs $60 for a single year covering 5 simultaneous connections and payment is accepted via PayPal or credit card. For those who also want a security suite in addition to a VPN, Malwarebytes Premium costs $100 per year for the VPN and device security for five devices.

Malwarebytes does a good job, the price is right, and it comes from a respected name in security based in the U.S. This goes a long way for trust and accountability, although anyone looking to maximize their anonymity and pay with a less traceable means won't find it here.