From 1999 until 2016, Apple released and continued to sell a series of external digitally connected displays optimized for Mac users. The displays started with DVI connectors, shifted to the Apple-made ADC connection, then back to DVI, expanded to dual-link DVI, pivoted to industry-standard Mini DisplayPort, and finally ended with Thunderbolt 2 connectors. After not making a display for a while, Apple returned to the market with its own Thunderbolt 3 display, the Pro Display XDR, and began shipping it in December 2020 for a minimum of $5,000.

And, gosh, do a lot of those older Apple monitors remain out in the field and in use. Apple never releases much in the way of unit sales, but it's a fair guess that several million displays were sold. While monitors dim and components fail over time, re-using an external Apple display with a new USB-C or Thunderbolt 3 Mac remains one of the top questions Macworld gets from its readers

That question has cropped up more than ever since vast numbers of people who worked in office have suddenly had to shift to working from home. Many of us have or prefer a two-monitor display; some readers have sent us pictures of several monitors driven by the same Mac.

You may have upgraded your Mac since 2015 or 2016 and abandoned an older Apple display for compatibility reasons, but now it looks awfully appealing for your work-at-home situation. Let's look through the options across generations of Apple equipment.

(Also, don't forget that if you have an iPad that can run iOS 13 and a Mac model released since about 2015 running macOS Catalina, you can use the Sidecar feature to extend your Mac with an iPad. If you don't meet the parameters or want other options, check out the more broadly compatible Luma Display, as well as Duet Display, which works with Apple and other mobile and desktop platforms. We also have instructions on connecting more modem displays (and even an old iMac) as a second display. )

In this article, I discuss compatibility with Thunderbolt 3, which relies on the USB-C connector. All of Apple's current Macs include Thunderbolt 3, a high-speed data-transfer standard. Apple's version also allows for backwards compatibility with Thunderbolt 2 and via adapters can directly connect to HDMI, DisplayPart, and USB 2 and 3, among other standards. Docks extend compatibility further, with Mini DisplayPort, VGA, DVI, and other formats. (While we've written about this before across several articles, we decided to consolidate everything we knew, alongside newer and better-reviewed adapters, into a single place.)

Only a single Mac model ever included a USB-C connector that didn't include Thunderbolt 3: the 12-inch MacBook that Apple introduced in 2015, updated in subsequent years, and discontinued in 2019. I'll note below exceptions for clarity.

Because it's more likely you have access to a newer Apple Display than an older one, I'll address the four digital standards Apple used in reverse order: Thunderbolt 2, Mini DisplayPort, ADC, and DVI (including dual-link DVI for larger displays).

If you're not sure what display you have, look at the back to find its model number (not its name, which often remains the same across many revisions), then enter that detail into Google to find the full technical specifications and connector type.

Finally, a MagSafe warning. Apple offered MagSafe and MagSafe 2 connectors with some of its later-generation monitors to let you use the display as a hub: plug in one or two cables and MagSafe, and your laptop was set to go. Apple has never licensed MagSafe to third parties, even though you can find MagSafe adapters for USB-C, these products likely violate Apple patents and haven't been certified by Apple.

As a result, if you use one and it damages your Mac, you could lose your computer and unbacked-up data for the minor convenience of reusing the display's charging port, and it's plausible that Apple would try to deny warranty repair (if it remained under warranty). Just read the one-star reviews on these products for more details. I've also noticed that retailers are cracking down on their sale, as there are almost none currently available at Amazon as I write this. 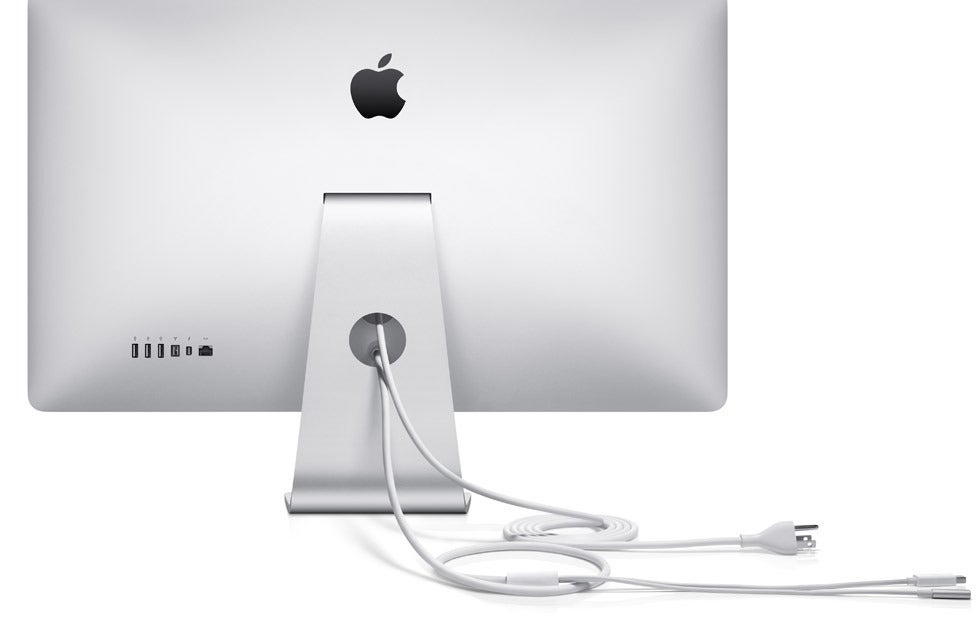 The back of the Apple Thunderbolt Display.

From 2011 to 2016, Apple sold its Apple Thunderbolt Display, a 27-inch 2560×1440-pixel monitor that relied on a Thunderbolt 2 connector to carry data to and from a Mac along with a MagSafe or MagSafe 2 connector (depending on model) for charging. The monitor featured a 720p iSight (front-facing) camera, mic and speakers, and several connections: one gigabit ethernet port, one FireWire 800 port, and three USB ports.

You can look at the squat Thunderbolt 2 jack to find a lightning-bolt symbol to ensure it's not an earlier monitor that uses an identical-appearing connector shape, but only handles Mini DisplayPort. (That symbol is a rectangle with a vertical line on either side.)

While the Thunderbolt 2 cable doesn't power to a Mac laptop, it should allow use of all the other ports on the display. If you have trouble getting the camera to work, seeing only a black feed, try this trick to fix a software agent at Stephen Foskett's blog. 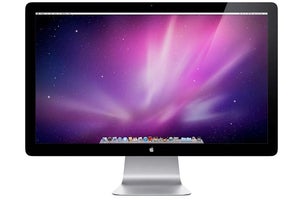 Even though Thunderbolt 2 and Thunderbolt 3 carry DisplayPort video using the DisplayPort standard, the way in which that signal is put over the wire makes it incompatible with Thunderbolt. Confusing, I know, and an irritant for people since early Thunderbolt days.

To use an LED Cinema Display with a modern Mac over USB-C, you need an adapter or a dock. Either adapter or dock can be USB-C compatible (for a 12-inch MacBook) or Thunderbolt 3 compatible.

You have three solid choices for adapters:

With docks, there are options abound, but the cost is far higher. If you are looking to rescue an LED Cinema Display and don't need the array of other ports in a dock, consider purchasing a far less expensive DisplayPort or HDMI display and use a USB-C adapter for either of those formats to connect to your Mac.

However, if you want the ports and to connect an LED Cinema Display, consider these docks.

For the 24-inch USB Cinema Display:

For either the 24-inch or 27-inch USB Cinema Display: 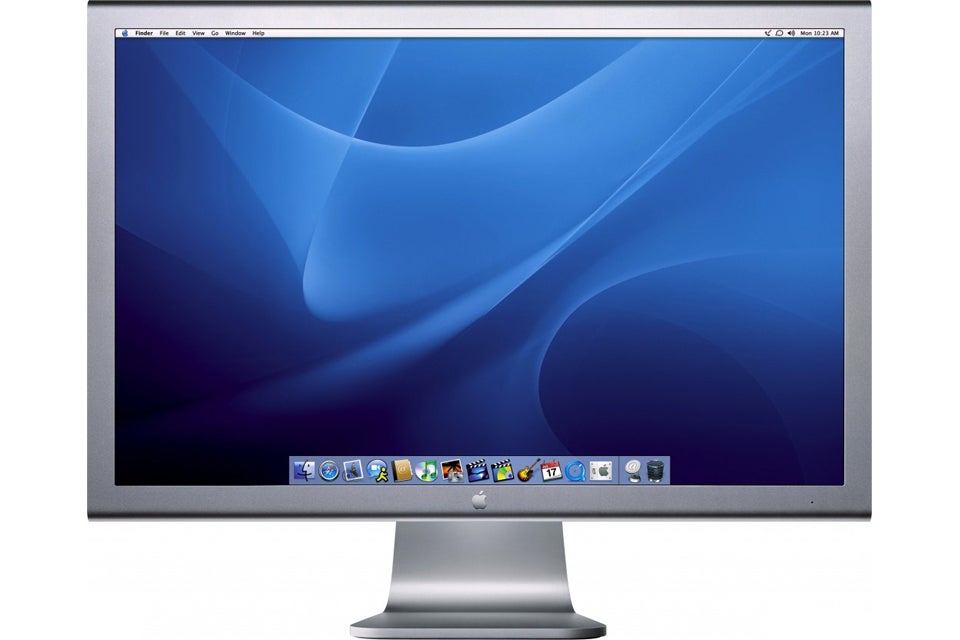 For all the DVI-based displays except the 30-inch HD model, you can turn to a simple, inexpensive adapter. For displays with ADC, you will have to find on eBay or elsewhere an ADC to DVI adapter, which were once plentiful. You might even have one in your junk box of old adapters. (Don't try to fool me; I know you have one.)

The dual-link DVI port on the 30-inch Apple Cinema HD Display requires a different approach to pair together the separate DVI signals that drove the larger display. At least one reader had success with the Club 3D dual-link DVI to USB-C adapter ($44).

You can also opt to find a Apple Mini DisplayPort to Dual-Link DVI Adapter, which is no longer manufactured, but shows up on eBay and elsewhere from time to time. Monoprice also offered such an item, but it's out of stock, too, of course. This adapter paired with a Mini DisplayPort adapter or dock with the port noted for Mini DisplayPort-era monitors has worked for some.