For five years Google has been trying to show the rest of the mobile world the right way (or at least the Google way) to make an Android phone. And for five years, the general phone-buying public has replied with meh, then proceeded to buy the latest iPhone or Galaxy. The creator of Android is hoping that the Pixel series' most radical refresh yet will get more people to sit up and take notice.

And the Pixel 6, along with the even more expansive Pixel 6 Pro, is a radical change. Last year's Pixel 5 and less expensive variants were a left turn away from trying to compete with the excess of the Galaxy S series, focusing on fundamentals like battery life and value over whiz-bang new hardware features. That makes the Pixel 6 phones a 180-degree turn, back towards hardware that compete and (possibly) surpass some of the best devices on the market.

The biggest and boldest Pixels ever

That begins with a totally new design language, ditching the somewhat staid looks of the Pixels 4 and 5. The Pixel 6 looks like no other phone on the market, with a bold camera module popping out of the rear and just daring you to call it a bump. This will certainly be a controversial choice — it makes the phones thicker and presumably more vulnerable around those expensive cameras — but it's certainly a distinctive one. 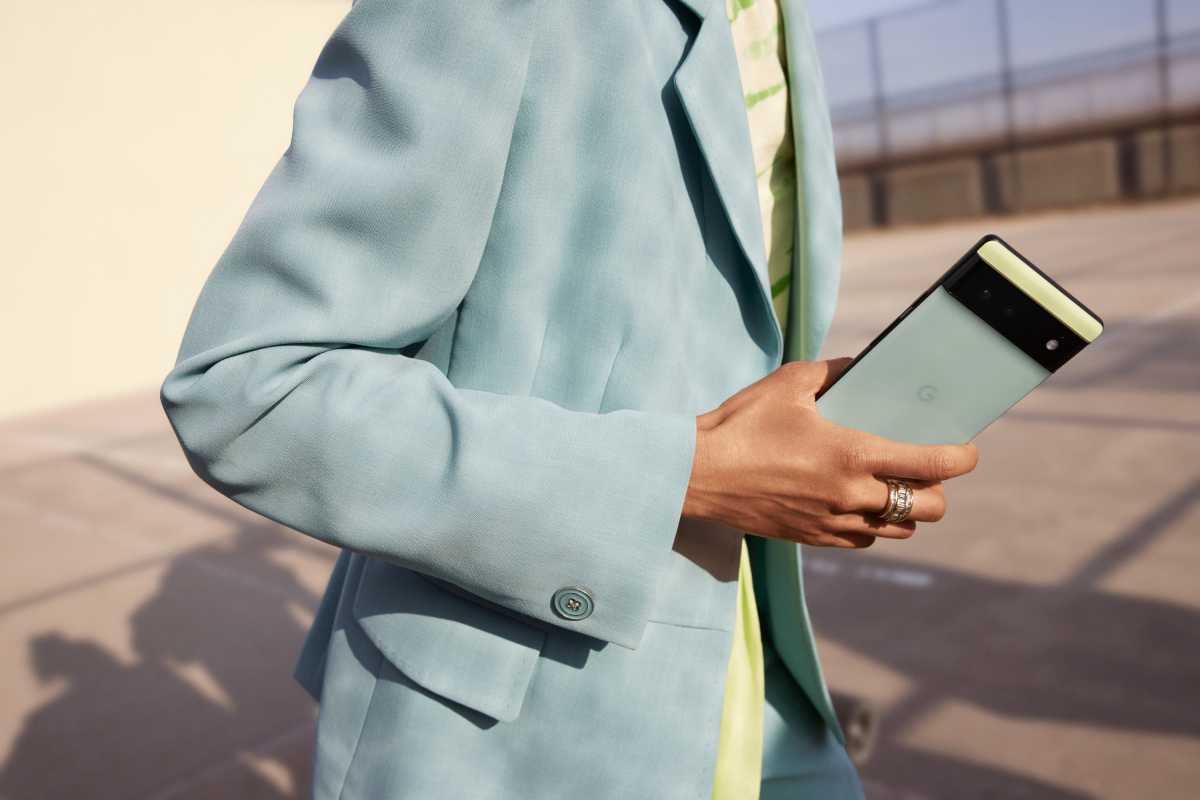 Equally eye-catching are the contrasting colors, moved from a tiny blip on the power button of previous Pixels to an unmissable stripe above the black camera module. Those who don't want to make a splash can stay with an all-black Pixel 6 (Stormy Black), but the duck egg blue model gets a pale green stripe (Sorta Seafoam), while the pale salmon version gets a brighter splash of red (Kinda Coral). The Pixel 6 Pro isn't quite so out-there: In addition to an all-black model you can choose between a gold-and-darker-gold (Sorta Sunny) or silver-and-darker-silver (Cloudy White) scheme. 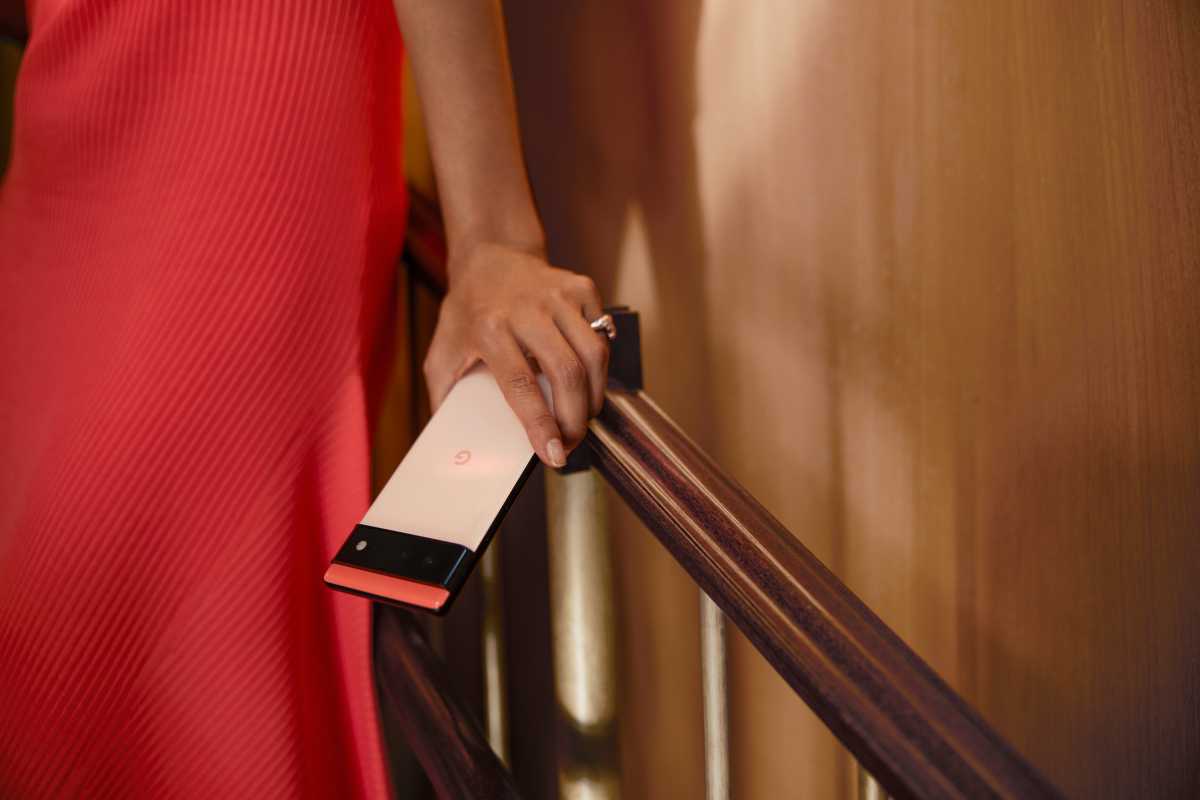 From the front the Pixel 6 and 6 Pro look less interesting, if only because the industry has smoothed down phone design to its barest essentials. You get an edge-to-edge OLED screen with a centered hole punch camera, with no extra spaces for multiple lenses. The Pixel 6 moves the fingerprint sensor from the rear of the phone to the more trendy spot underneath the screen. Slightly thicker bezels — a few millimeters at most — allow for a true earpiece, alleviating some of the complaints of the under-screen speaker from the Pixel 5.

Google lays down its chips

And that's about it in terms of physical design. Whether you find the bold camera strip and color choices appealing is, of course, a matter of taste. But what can't be denied is that Google is pulling out the stops to make its phone's internals stand out from the Android crowd, following in the footsteps of Apple to create its own in-house chip designs.

Google is making this new Tensor silicon the focus of its marketing for the new phones, calling them the fastest, smartest, and most secure Pixel phones yet. Admittedly, that's not a high bar to clear: Google went with less expensive Qualcomm processor options for the Pixel 4a and 5 series. 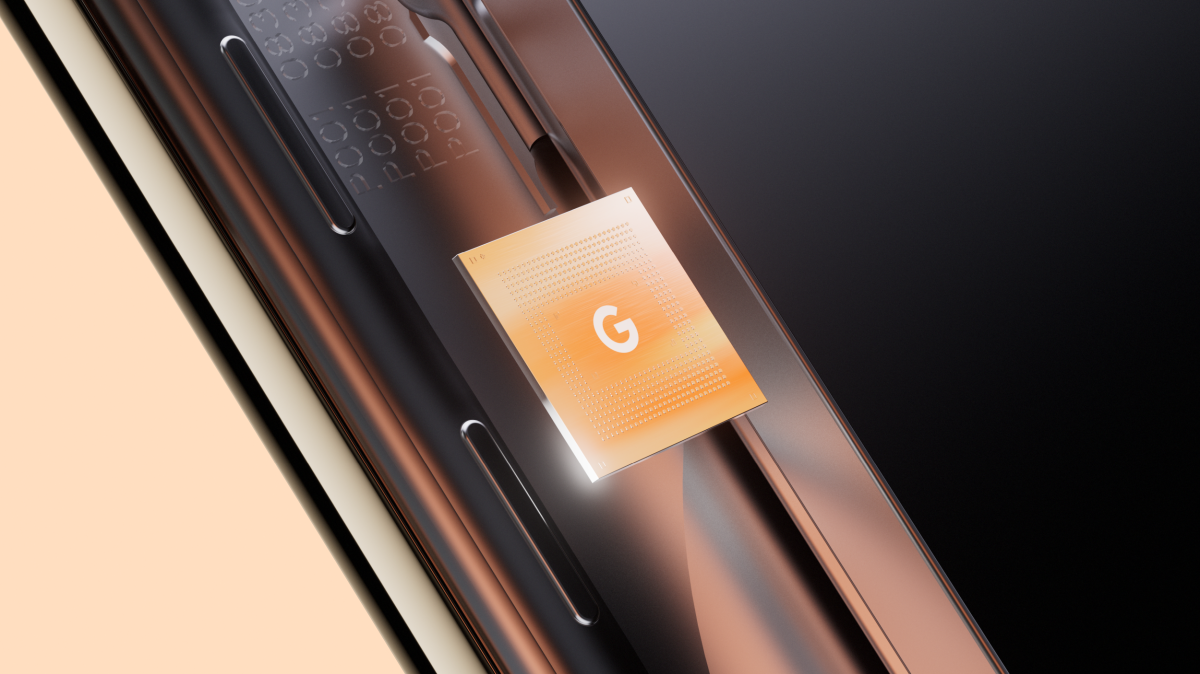 Google's Tensor system-on-a-chip uses an eight-core primary ARM processor, with two flagship Cortex-X1 cores providing the fastest performance at 2.8 Gigahertz (GHz). These are the same cores Samsung and Qualcomm use in their fastest processors. That dynamic duo is backed up by two Cortex-A76 cores, slightly older modules running at only 2.25GHz. For low-power operations, the system tags in four Cortex-A55 cores running at a more sedate 1.8GHz. This octet of custom power is supplemented by an ARM Mali-G78 GPU, the current top of the line in mobile media power.

The Tensor SoC also includes the M2 revision of Google's Titan security module. The M2 has been featured in previous Pixel phones, but now it's paired with a dedicated CPU subsystem for even more specialized protection against exotic attacks like voltage glitching.

The Pixel series has few standout features beyond its straight-from-the-source Android software, but the camera performance is definitely its most alluring one. Google's camera hardware isn't amazing, but its photo and video processing gives it the extra oomph to compete directly with Apple and Samsung. For the Pixel 6, Google is bringing a one-two punch of nigh-unbeatable processing plus new sensors and lenses that can compete with the best that the iPhone or Galaxy have to offer.

The standard Pixel 6 offers a 50-megapixel (MP) wide-angle sensor and 12MP ultrawide. The upgraded Pixel 6 Pro keeps them both and adds on a 48MP telephoto lens with an impressive 4x optical zoom factor. That makes it much more versatile than any Google phone that's come before — the Pixel 5 was notably using the same sensor as the previous two generations. The newer 1/1.3-inch sensor captures 150 percent more light than the previous model. Combined with the software Super Res Zoom, Google boasts that it can get up to a 20x zoom factor.

But Google isn't resting on its laurels with software, either. The new phones get new tricks enabled by those custom processors, like a Magic Eraser object removal tool in the Google Photos editor that's powered by machine learning. Shutterbugs also get access to automatic face-unblur processing, and a Motion Mode that brings movement to still shots. Recording at up to 4K 60FPS is supported for video.

Go big, or even bigger?

The Pixel 6 is in no way small, despite being the lesser of these two devices: Its 6.4-inch screen would have been one of the biggest on the market just a few years ago, even if its 1080p resolution and 90Hz refresh rate are merely pretty good. The larger Pixel 6 Pro stretches dimensions to 6.7 inches, allowing it to pack in 3120 x 1440 resolution and a faster 120Hz refresh rate. The smaller phone also has a slightly less powerful front-facing camera: 8MP versus 11.1MP. 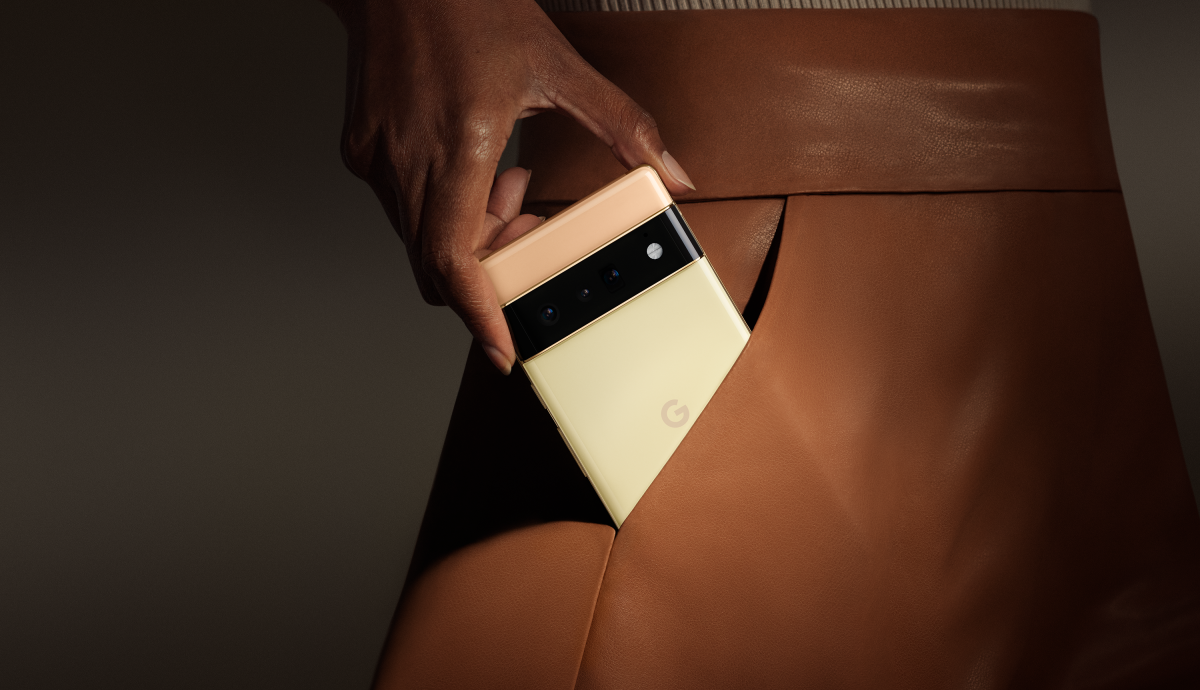 The Pixel 6 Pro gets a few other perks, like a larger battery (5000 milliamp hours versus 4600), more memory (12GB versus just 8GB), and a 512GB storage option in addition to standard 128GB and upgraded 256GB. Both phones can charge at up to 30 watts wired, with Qi wireless charging and reverse wireless charging (for earbuds and the like) as a bonus. The new Pixels indulge in some of the fruits of cutting-edge mobile tech, including 5G, ultrawideband support (handy for things like the new generation of location trackers), and ultra-fast Wi-Fi 6E. Dual SIM cards are supported, as long as one of them is an eSIM.

As with all Pixels, the X-factor is the software. Google's own phones get it straight from the source, generally receiving new updates months ahead of the competition (at least). It also gets a suite of exclusive Android features, like automatic call screening and the new adaptive device theme that automatically adjusts based on your wallpaper. The Pixel 6 and 6 Pro are launching with the brand new and visually striking Android 12 update, and Google is matching Samsung's promise to provide security and feature updates for at least five years after release. That means the Pixel 6 might just be running Android version 16 in 2025. 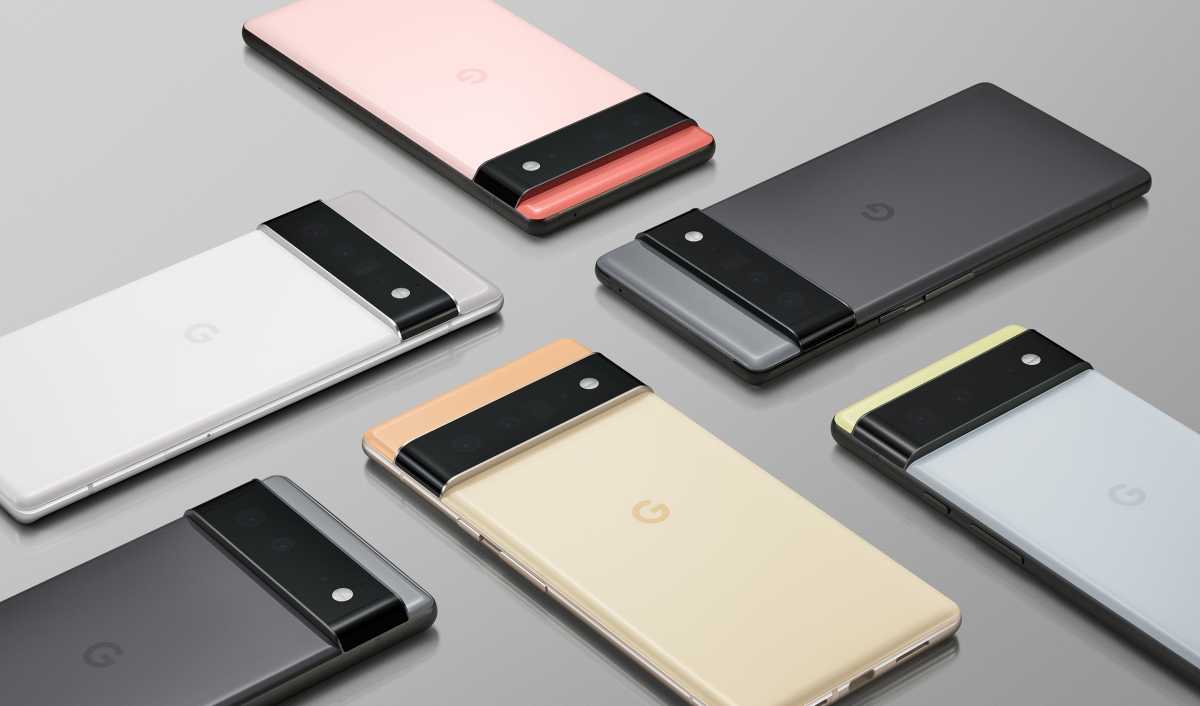 If you find all of this intriguing, then you might want to check your bank balance. The standard 128GB version of the Pixel 6 starts at $599 (£599/€649/AU$999) and is available for pre-order now in Australia. It's available on a range of different plans from the major carriers Telstra, Optus and Vodafone. See the widget below for popular 5G plan options: