This is our first look at an NVMe SSD from Corsair. In fact, it's our first look at any sort of Corsair SSD in over seven years. And apparently we've been missing out, because the Corsair MP600 Pro XT is an absolute barn-burner. This PCIe 4.0 SSD hangs with and sometimes bests the fastest drives we've ever tested, for a considerably lower price than its fellow hot-rod rivals. And if you want to get fancy, there's even a version designed to plug into the liquid-cooling setup of exotic PCs, for a minimal markup.

We can't find much to complain about. This is a fantastic high-performance SSD. 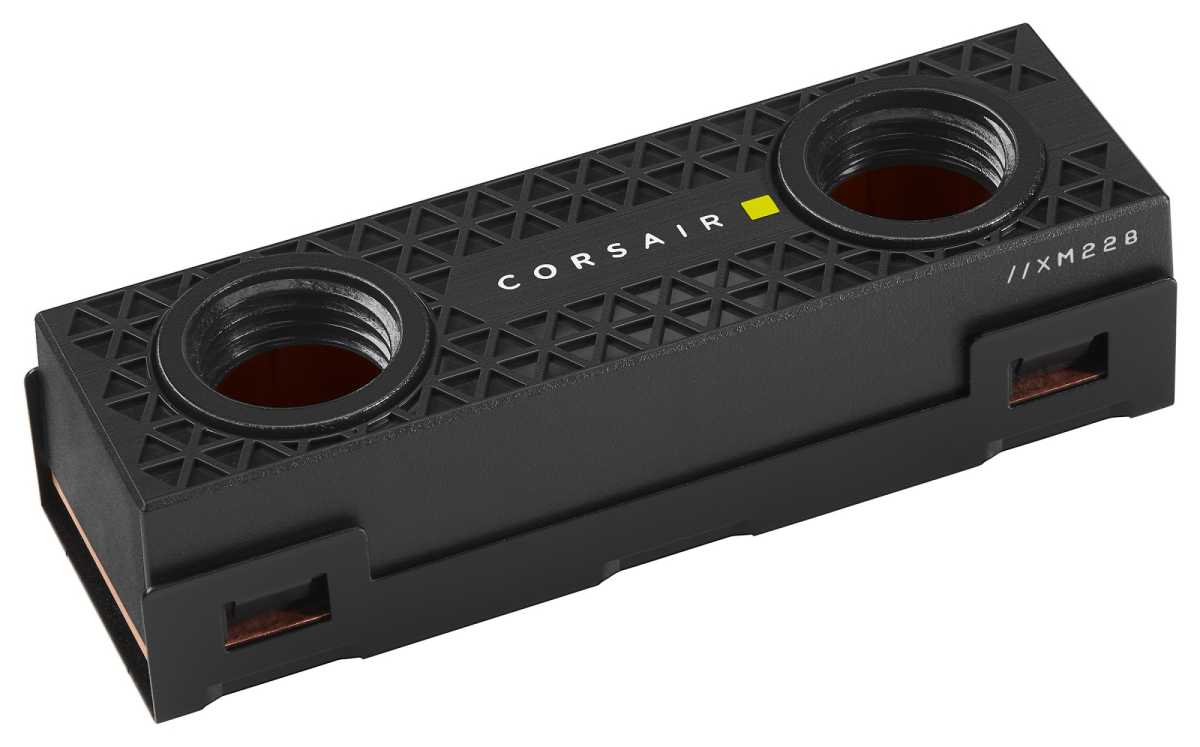 The slightly pricier Hydro version of the MP600 Pro XT has a liquid cooling jacket in place of the standard heat sink.

Dynamic means that the amount of NAND written as SLC (Single Level Cell/1-bit) varies with the workload. Writing a single bit, off/on voltage is far faster then writing three bits due to the error checking required with multiple voltage levels.

Note that the less free space you have, the less NAND is available for secondary caching. And shoutout to Corsair for providing the specs without making me jump through hoops or tear off the heat sink as many vendors do these days.

The MP600 Pro XT's is the first drive we've seen that performs on par with Seagate's mighty FireCuda 530. It actually set a new record for our 48GB transfer tests. Given that it's more affordable than its rival and most top-tier drives, color us impressed. 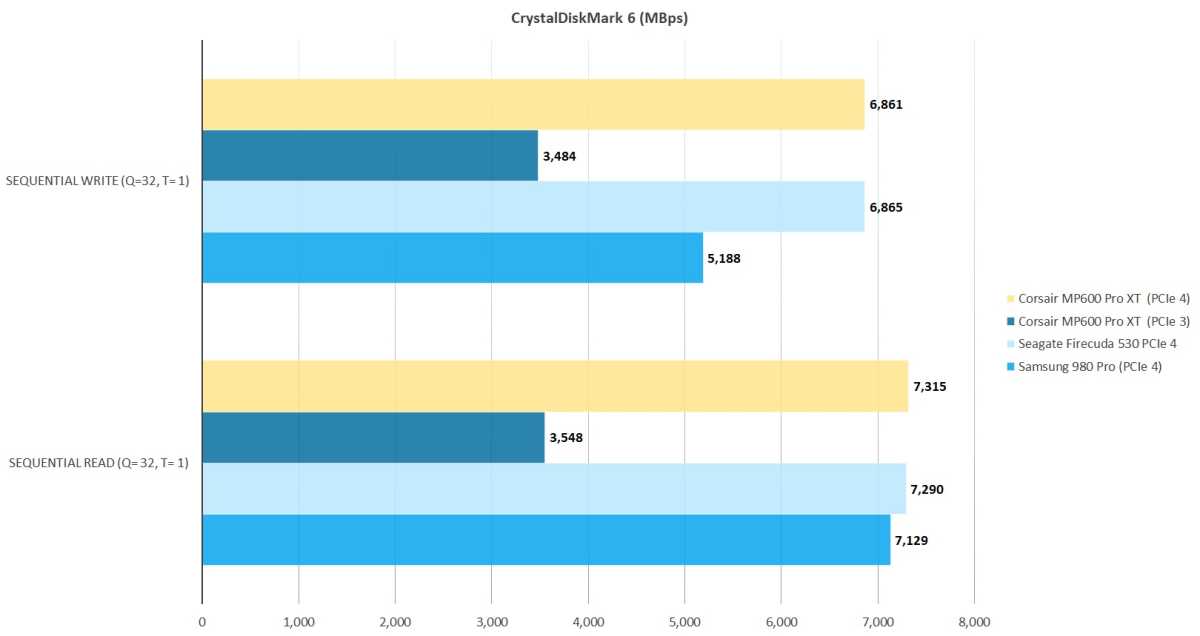 The MP600 Pro XT was extremely competitive, even besting Seagate's FireCuda 530 in reading.

As you can see above, the MP600 Pro XT actually beat the FireCuda 530 in CrystalDiskMark 6's sequential read test. Look below and the news is even better. 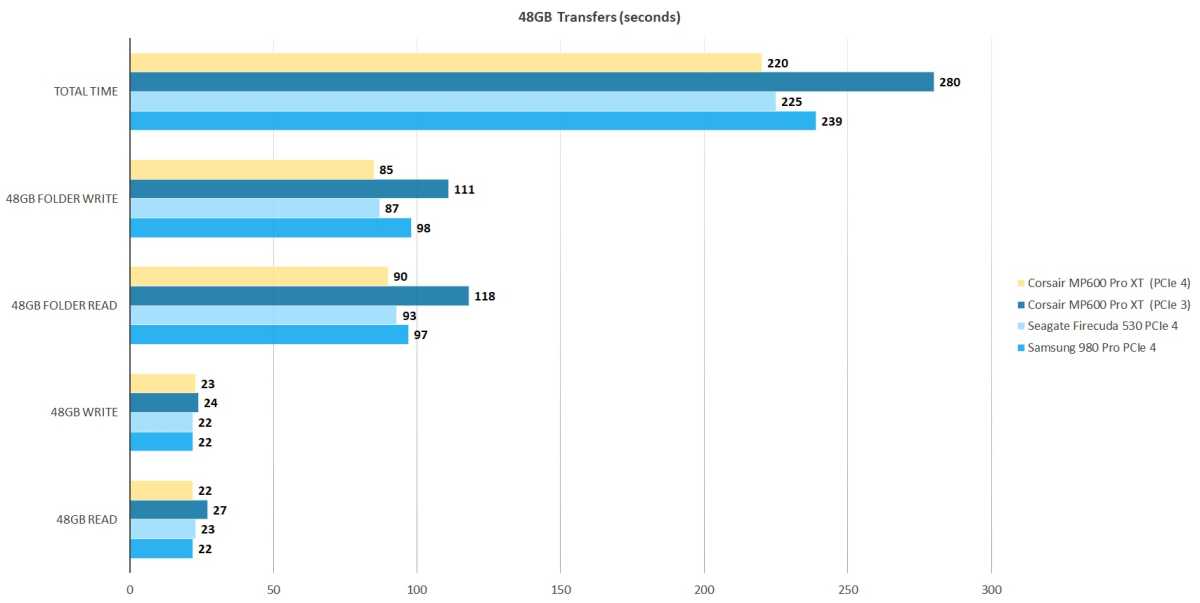 The MP600 Pro XT turned in an outstanding performance in our 48GB transfer tests. This test is as close to real world performance as you can get.

Yup, the MP600 Pro XT is faster than the FireCuda 530 by 5 seconds overall when transferring 48GB files and file sets. 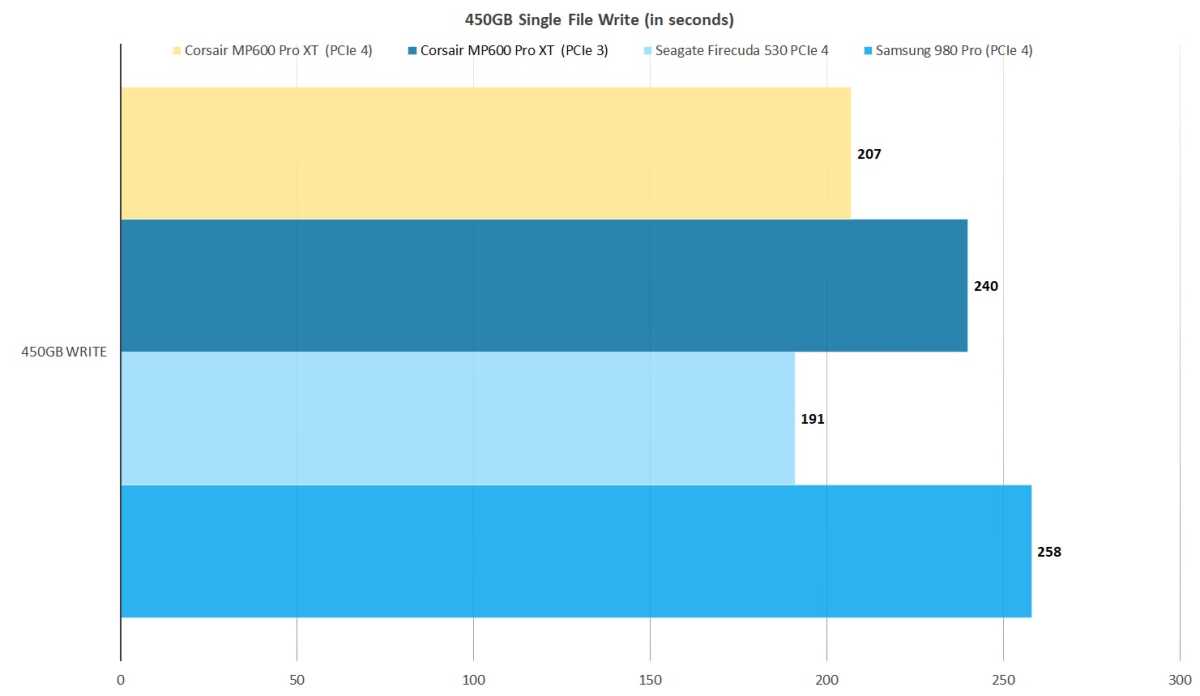 The MP600 Pro XT fell a bit off the FireCuda 530's pace on our ultra-long 450GB sustained write, but it was still the second fastest performance we've seen. Note that the company promise is 7100MBps read and 6800MBps write performance—less than what we saw.

The company stated that it would use the Micron B47 NAND used on our test unit or better, or roll out a new part number. Another shoutout to Corsair for that.

The PCIe 4 testing was done on an MSI MEG X570 motherboard socketing an AMD Ryzen 7 3700X 8-core CPU, using the same Kingston DRAM, cards, and benchmark software. ImDisk replaces Softperfect as the RAM disk. All testing is performed on an empty, or nearly empty drive that's TRIM'd after every set of tests.

Write performance will decrease as the drive fills up. In some cases, components may change. If your drive, given similar hardware, does not perform as well as our test unit, please let us know.

The MP600 Pro XT is a very pleasant surprise from Corsair. It's the first SSD we've seen that's beaten the mighty Seagate FireCuda 530 at anything, and it holds its own in the tests it didn't win outright. Gamers or others with intensive workloads will benefit from the heavy-duty heat sink, or the liquid-cooling option.