Thanks to its modular design and desktop processor, Dragon Canyon is a solid option when considering a SFF build under 10 liters.

Last summer, Intel leaned hard into its line of modular gaming PCs. Its launch of Beast Canyon (aka the NUCBTM) muscled up into small-form-factor PC territory, with an eight liter case capable of housing full-length graphics cards. The only compromise was its soldered mobile chip—if you could call it that, given the strong test results.

Half a year later, the release of Dragon Canyon eliminates that weakness. This Next Unit of Computing (NUC) variant doesn't revolutionize much. A new processor is the star of the show: a socketed Alder Lake chip, plus some of the platform upgrades that come with 12th-gen Core chips. Otherwise, this NUC looks the same as Beast Canyon, thanks to sporting virtually the same chassis as its predecessor.

But we can't say that it's just a processor upgrade. Moving from a mobile chip to a replaceable desktop CPU is quite a move. On paper, Dragon Canyon looks much more equipped to face off against a DIY small form factor (SFF) PC. And that's exactly what we're going to dig into.

Dragon Canyon is actually the code name for the US$1,450 NUC12EDBi9 and US$1,150 NUC12EDBi7—Intel's official names for the Core i9 and Core i7 variants of this bare-bones gaming PC. The company sells it as a kit, which means you have to bring your own memory, storage, and graphics card. Everything else (the chassis, cooling, and proprietary power supply) is included.

Since Dragon Canyon and Beast Canyon share virtually the same chassis, the concept is exactly the same as before. Inside there's just two components to deal with: An Intel Compute Element module comes with the kit and houses the memory, storage, and a pre-installed Core i9-12900 or Core i7-12700 CPU. You have to obtain and install your own discrete graphics card, which can be up to two slots thick and a max of 12 inches long. The idea is that you can easily swap either of those elements for a newer replacement down the road. 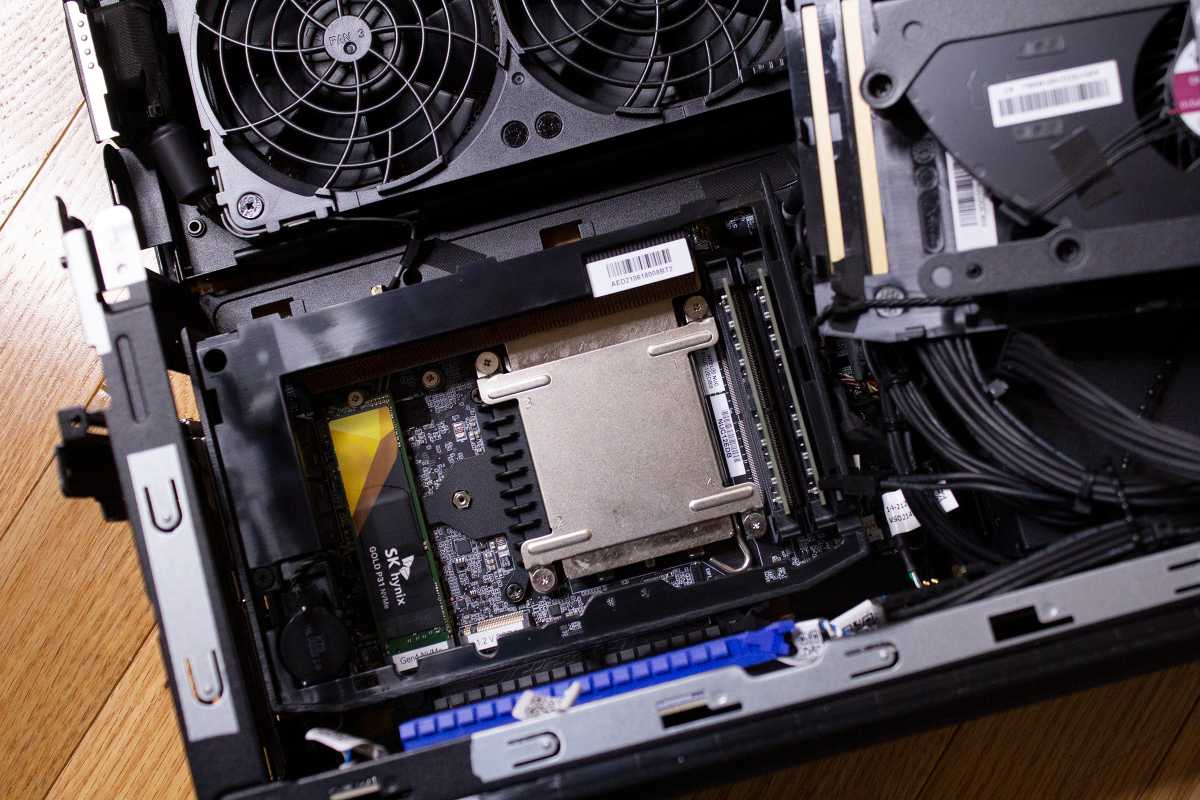 This newer Compute Element is the major upgrade in the system. (The chassis has the lone minor change—Intel swapped one of the USB-A ports for USB-C.) The changes are all about cutting-edge tech and speed. Inside is a desktop 12th-gen Alder Lake processor with a completely different architecture from the previous generation and a GPU slot that supports PCIe 5.0. And at the back, a second ethernet port capable of 10Gbps has been added. That speed may sound ludicrous to most of us in the US, but one PCWorld staff member is living the ultra-fast broadband life.

Because of that desktop Alder Lake processor, Intel promotes Dragon Canyon as upgradable to next-gen CPUs. They certainly are, but Intel doesn't usually keep a socket around for more than a couple of generations. Realistically, very few people will have reason to upgrade.

Serviceable hardware is still a plus, though. And in theory having a desktop CPU means less of a compromise in performance compared to a mobile chip. Let's see how that plays out in the benchmarks.

Rather than try to tackle Dragon Canyon as an independent product, I chose to take a narrower focus. We already know how Beast Canyon stacked up—the short version is pretty damn well. (You can read the full details in our NUCBTMi9 review from last July.) That eliminates the need to pick apart Dragon Canyon in fine detail.

Instead, the questions that Dragon Canyon raise are straightforward: How much does it boost performance in CPU-oriented tasks? And how does it stack up against a similar DIY small-form-factor PC?

To get a sense of the answers, we'll look at a select handful of benchmarks. Think of these numbers more as a general impression about the hardware, rather than a set of performance expectations. 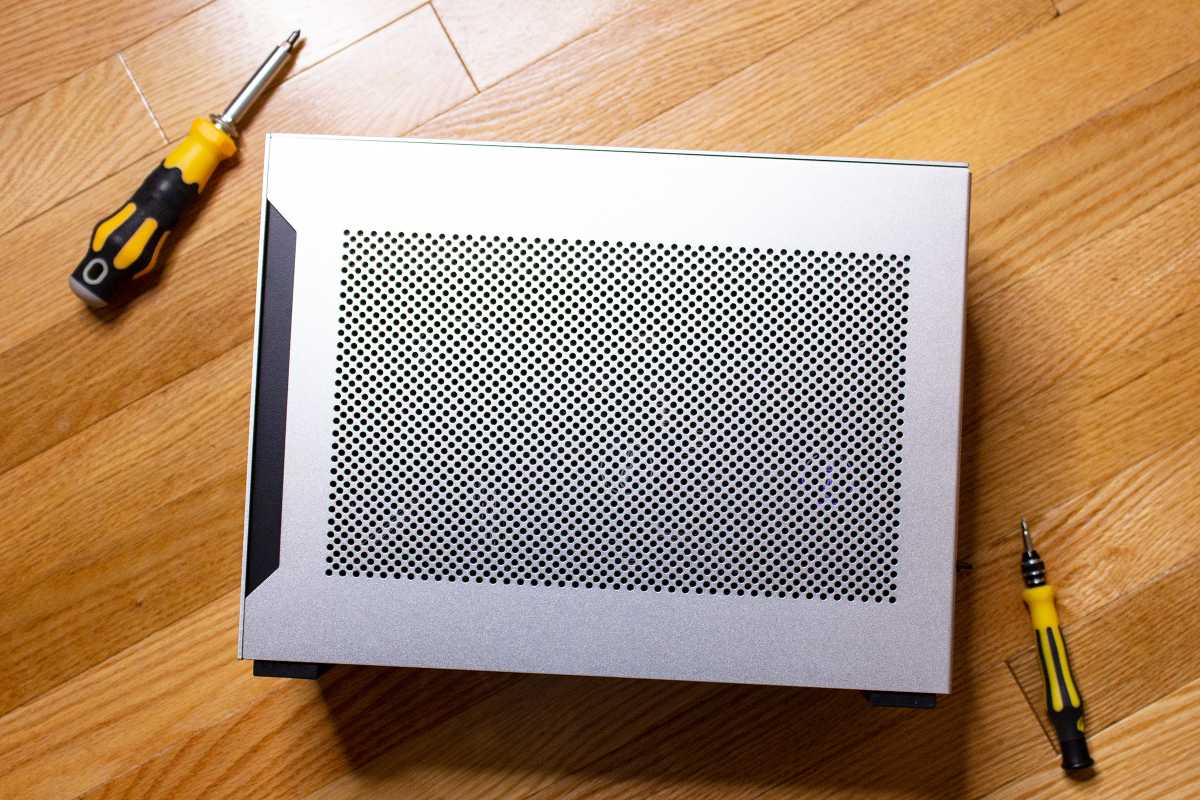 The Lian Li A4-H2O has a similar footprint as Dragon Canyon—it gets its extra volume from its height. Image: Alaina Yee / IDG

Intel shipped us Dragon Canyon as a bare-bones kit this time, so we supplied our own memory and storage for our NUCEDBi9 review unit. For the graphics card, we used the same compact Asus RTX 3060 that came with our Beast Canyon review unit last year.

As you'll see, I couldn't obtain the exact same SSD model as in our Beast Canyon unit. However, the numbers below show that using a PCIe 3.0 (rather than a matching PCIe 4.0 drive) in these particular benchmarks didn't make a difference.

Our Beast Canyon review unit came fully outfitted. In the interest of keeping things as even as possible across the board, I used its compact Asus GeForce RTX 3060 with the other test systems.

While not an exact match for Dragon Canyon and Beast Canyon in size, this 11-liter system is still close enough to get an idea of how well the two NUCs stack up against a high-performance DIY small-form-factor PC. For the GPU, I again used Beast Canyon's compact Asus RTX 3060 for consistency.

First up is Cinebench R23, the latest in Maxon's line 3D-rendering benchmarks. For evaluation of Dragon Canyon, this test helps provide insight into performance during in CPU-heavy tasks. The default setting loops the benchmark for 10 minutes, which is what we use for our tests. 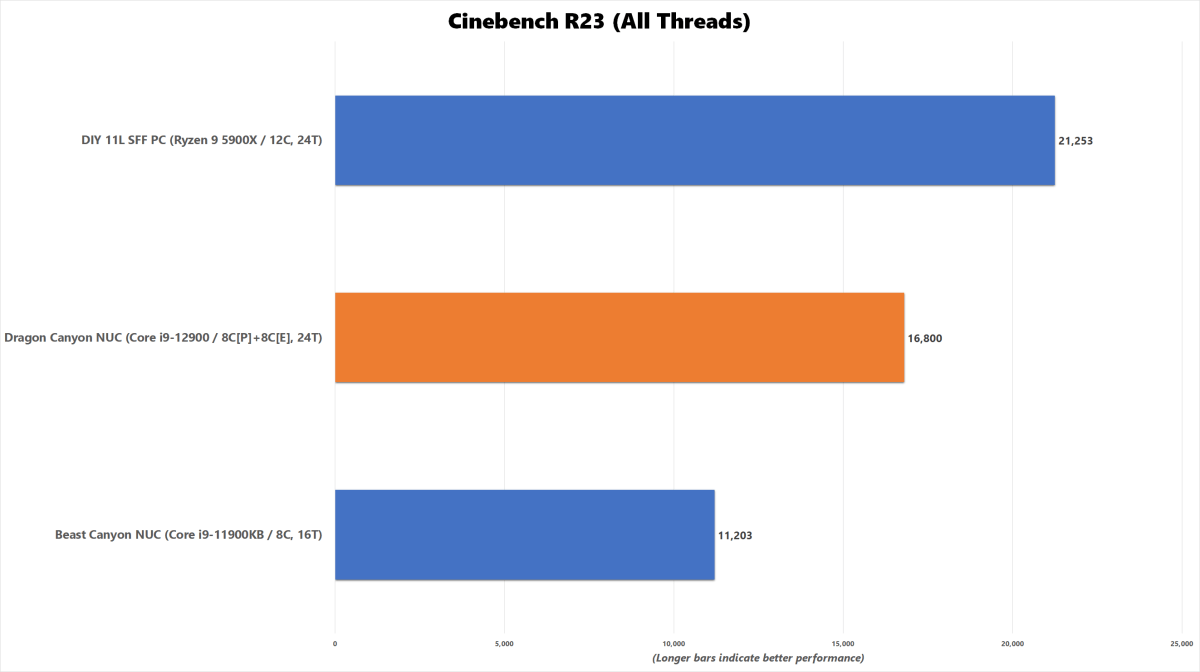 Looking at multi-core performance, you can see that going from Beast Canyon's Core i9-11900KB to Dragon Canyon's Core i9-12900 results in a nearly 50 percent improvement. That bodes well for anyone considering Dragon Canyon. Still, the Core i9-12900 is a bit subdued within Dragon Canyon's confines—we expected numbers closer to the Ryzen 9 5900X. In Cinebench R23's single-core tests, however, Intel maintains its single-core performance advantage, just as in full desktop systems. That bodes well for gaming performance, as most games don't take advantage of all available CPU cores. 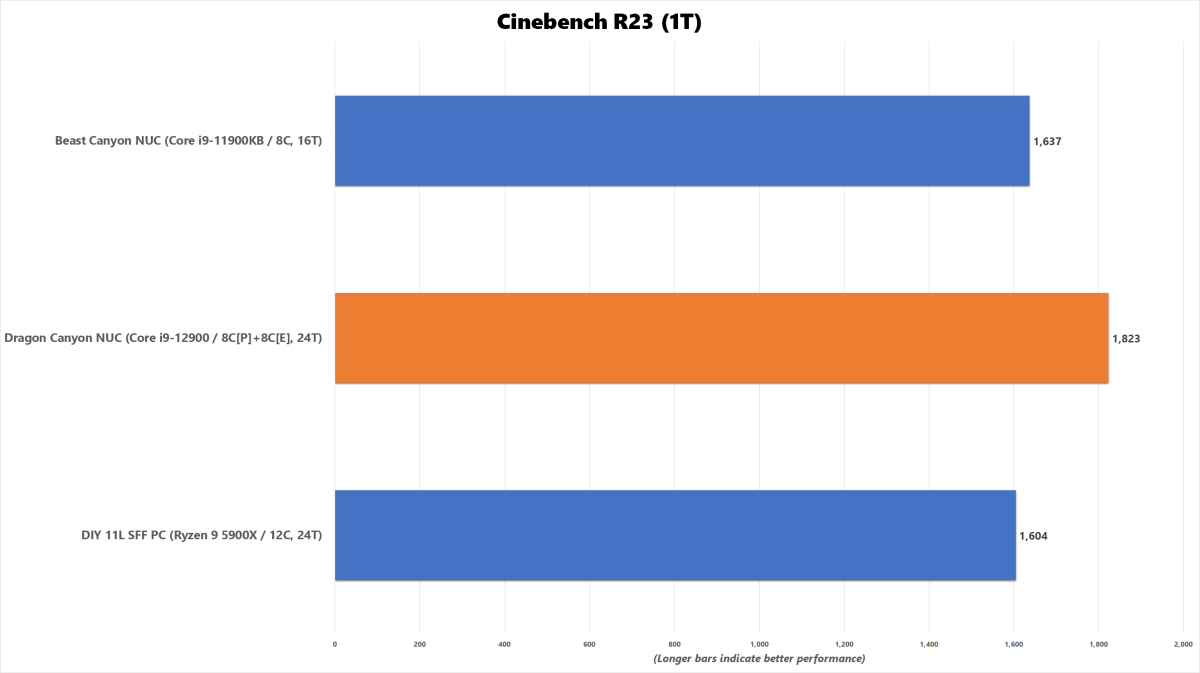 Our Handbrake test involves transcoding a 4K video formatted as an MP4 to an MKV file at the same resolution. This long-lasting encoding benchmark helps round out the Cinebench R23 results, as it provides further context for performance during CPU-oriented tasks. 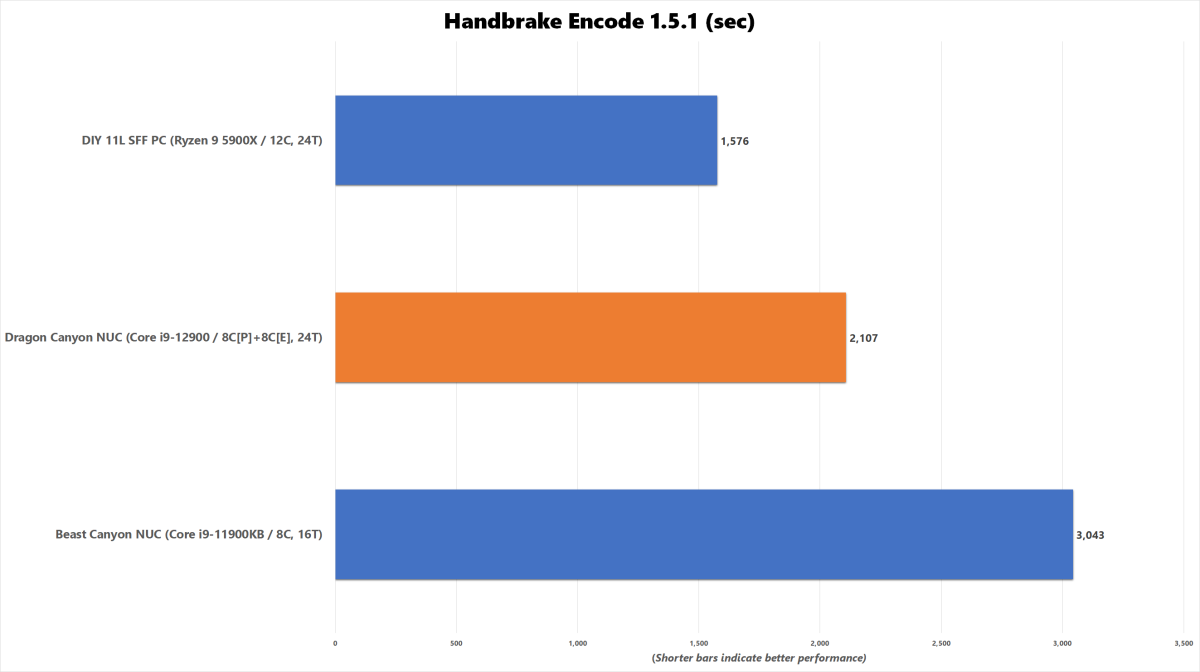 Beast Canyon's Core i9-11900KB performed decently in previous Handbrake benchmarks, though it was still surpassed by other mobile chips. Dragon Canyon's Core i9-12900 decreases the amount of time by a hefty 30 percent, though as you can see, hardcore content creators may still find a DIY SFF PC a better choice if time is money. The Ryzen 9 5900X chews through the file in nearly half the time of the Core i9-11900KB.

Spoiler alert: When it comes to gaming, these three systems don't give up much ground to one another on average. It's not a surprise, since games rarely lean on all of a CPU's cores. Instead, single-core performance still often dictates outcomes. Game optimizations can affect results, too. So if you're primarily a gamer and were debating between the ease of building in Dragon Canyon or more optimal performance in a SFF build, you fortunately don't have a very tough decision to make at all. 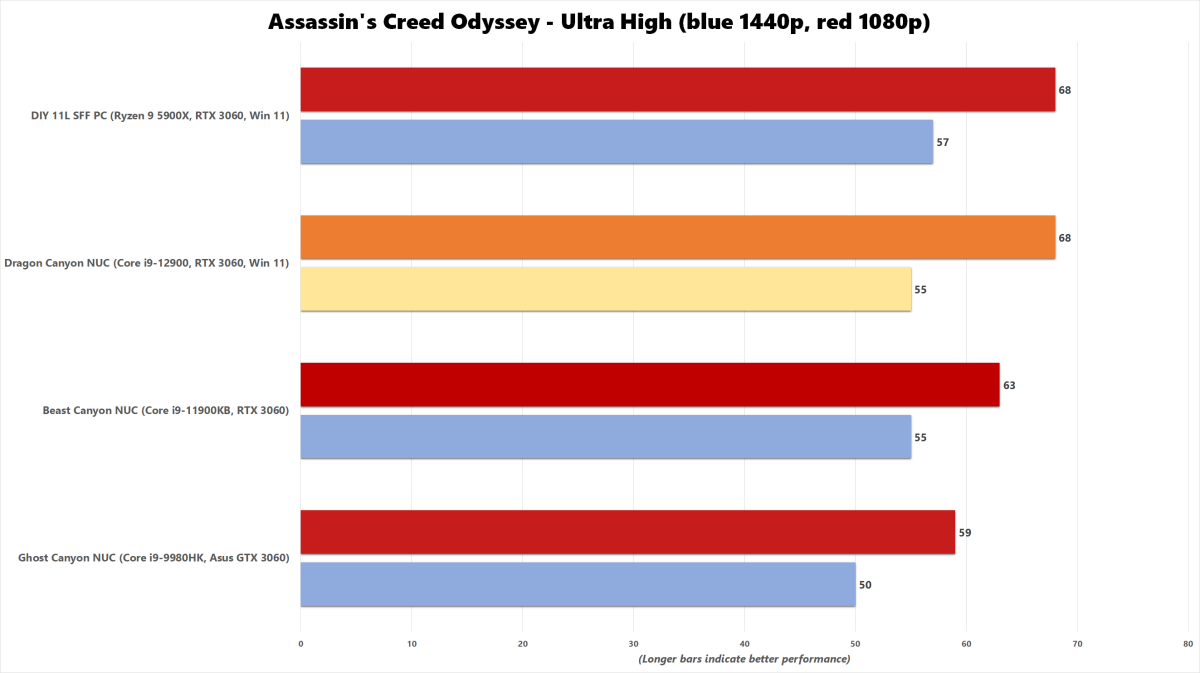 Just have a look at the results from the benchmarks. These AAA title still punish your graphics card more than anything else, which means your CPU plays less of a role in the final frame count. 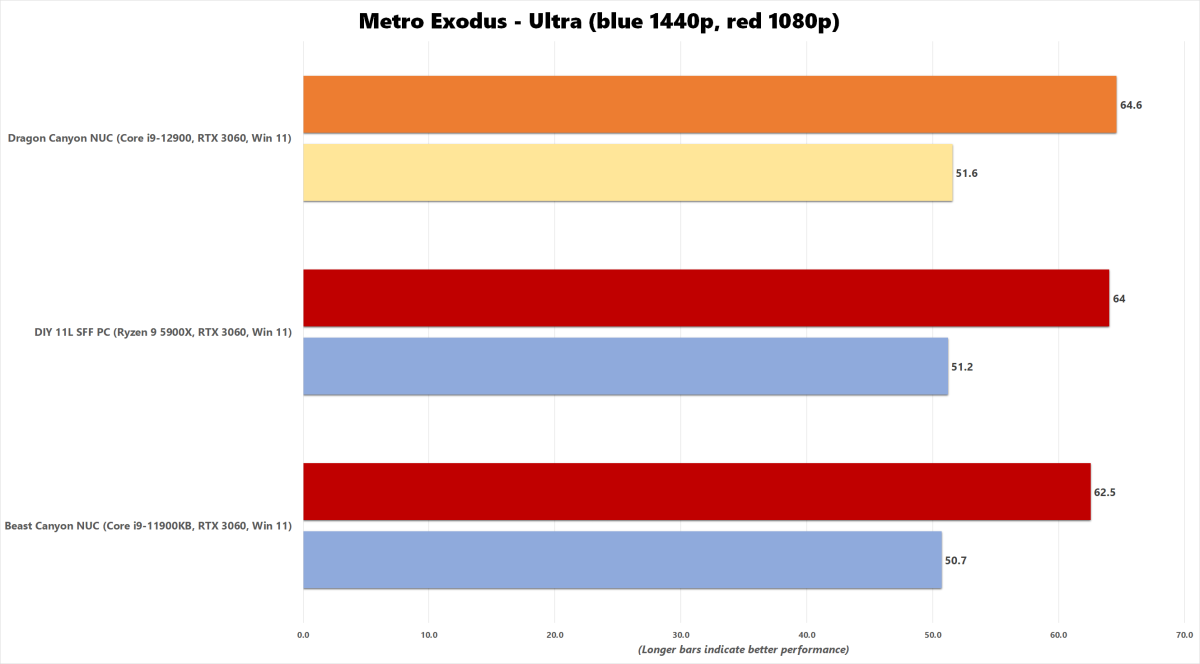 Across the board, Dragon Canyon either matches or outperforms Beast Canyon. The real competition here is between Dragon Canyon and the DIY SFF PC, and there's no clear winner in the more recent games. In Metro Exodus and Assassin's Creed Odyssey, the two systems are deadlocked, and in Borderlands 3, the DIY SFF PC has a lead of six percent. That edge might sound meaningful, but that lead isn't that much when you're already getting 80 fps. 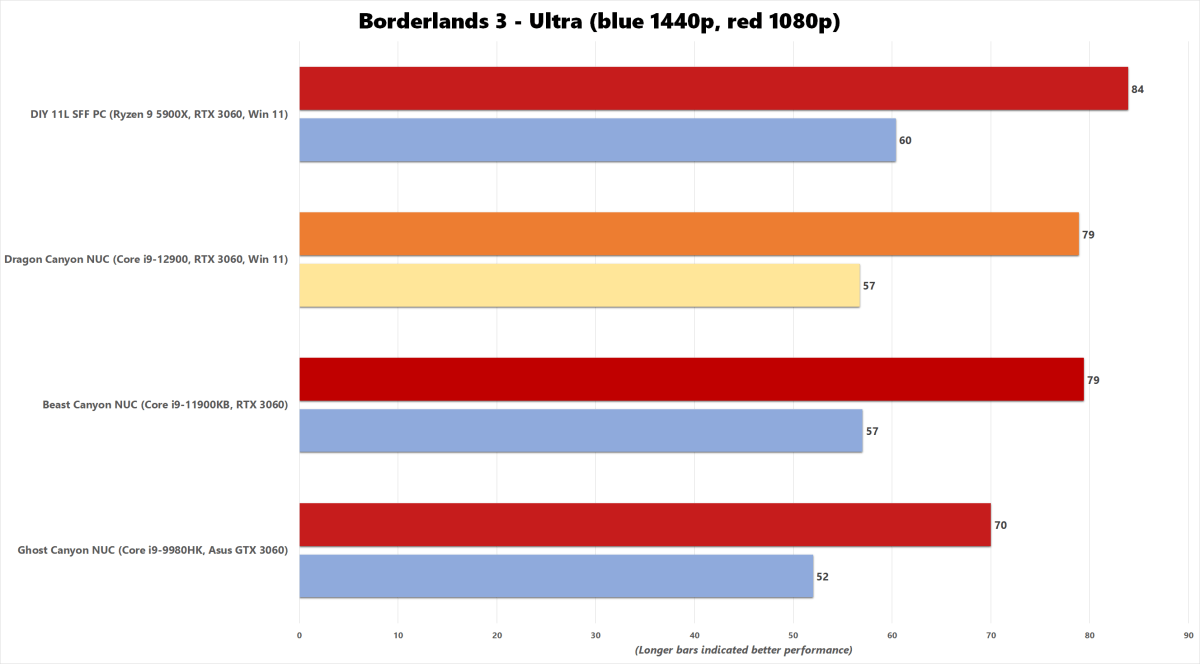 With some games, you may start to see more of a gap open up, as you can in Shadow of the Tomb Raider. But if they're older or less demanding games (which SoTR is), it again may not matter much. It all depends on whether you need your framerates to be as high as possible, like for a high refresh rate monitor. 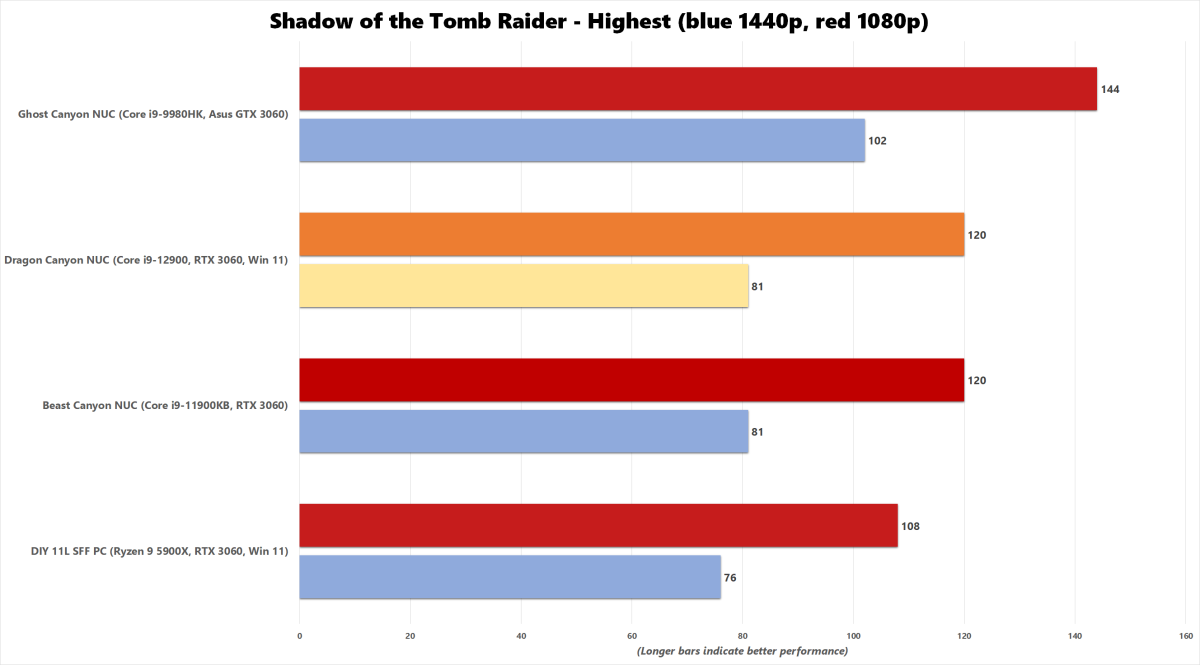 Like Beast Canyon, Dragon Canyon runs fairly quiet. In fact, the DIY SFF PC was generally noisier than it. Your choice of graphics card will influence your outcome, though.

It runs about as warm, too. During CPU-intensive tasks, like a 30 minute run of Cinebench R23's multicore benchmark, Dragon Canyon's Core i9-12900 averaged about 72 degrees Celsius. It crept up higher during gaming benchmarks—I often saw it hovering around 78 degrees Celsius. That's not as optimal as some SFF enthusiasts may like, but given its size and cooling, those numbers aren't unreasonable.

Before Dragon Canyon, Intel's gaming NUCs had an extreme niche vibe. You paid a lot for a cool, well-executed concept—and that was fine so long as you fit the narrow target audience. Otherwise, an alternative was often a better and cheaper choice.

At $1,150 for the NUC12EDBi7 kit and $1,450 for the NUC12EDBi9 kit, you're not necessarily saving money over a DIY SFF build, but you're also not sacrificing performance as with earlier NUCs that leaned on mobile chips. With its socketed chip, Dragon Canyon still retains that incredibly simple, time-saving system for building, while offering flexibility closer to that of a DIY PC. That change makes Dragon Canyon feels like a solid option when considering a sub-10L build, rather than a novelty.