Expectations have been running exceptionally high for Apple's new M2 processor to outpace Intel's best CPUs, but in the end, the M2 won't beat Intel's fastest chips. That was the news from Apple's WWDC keynote Monday.

The new 8-core M2 processor will appear in a redesigned MacBook Air, as well as in an updated MacBook Pro laptop. The M2 features 50 percent more memory bandwidth than the M1, and CPU performance is 18 percent faster, Apple stated.

But despite its cutting edge 5nm TSMC process and 20 billion transistors, Apple actually said the new M2 is slower than Intel's best chips.

Obviously, Apple wasn't emphasising that narrative, and its performance slide below shows the new M2 besting an Intel 10-core Core i7-1255U in a Samsung Galaxy Book 2 360.

What exactly Apple is claiming the M2 is faster in, well, we don't know, as the company has never publicly defined the meaning of its performance criteria. We have no doubt it's based on reality, as public companies don't make things up in fear of lawsuits, and the original M1 is a stunningly fast chip. 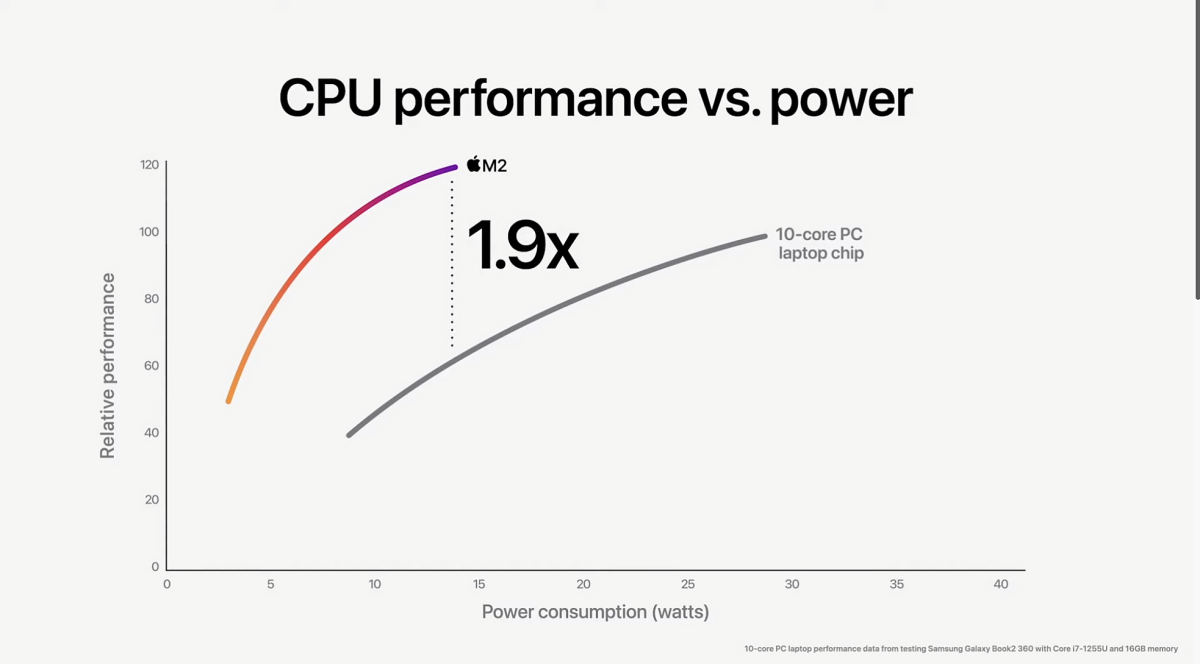 When the M1 came out, Intel's best CPUs were pretty elderlyâ€”but today is a different story. Intel's new 12th gen CPUs are actually quite competitive against Intel's key adversary AMD, as well as its side enemy, Apple.

That much can be seen in Apple's second slide, which I'm pleasantly surprised to show off, as Apple actually admits the new M2 is slower than the 12-core Core i7-1260P in an MSI Prestige 14 Evo laptop.

Apple should also be lauded for showing the full performance graph, as it took a lot of flak for essentially truncating performance of Nvdia's GPUs to make the M1 Ultra look more powerful. So, yes, shocker: Apple actually says the Intel Core i7 is faster. 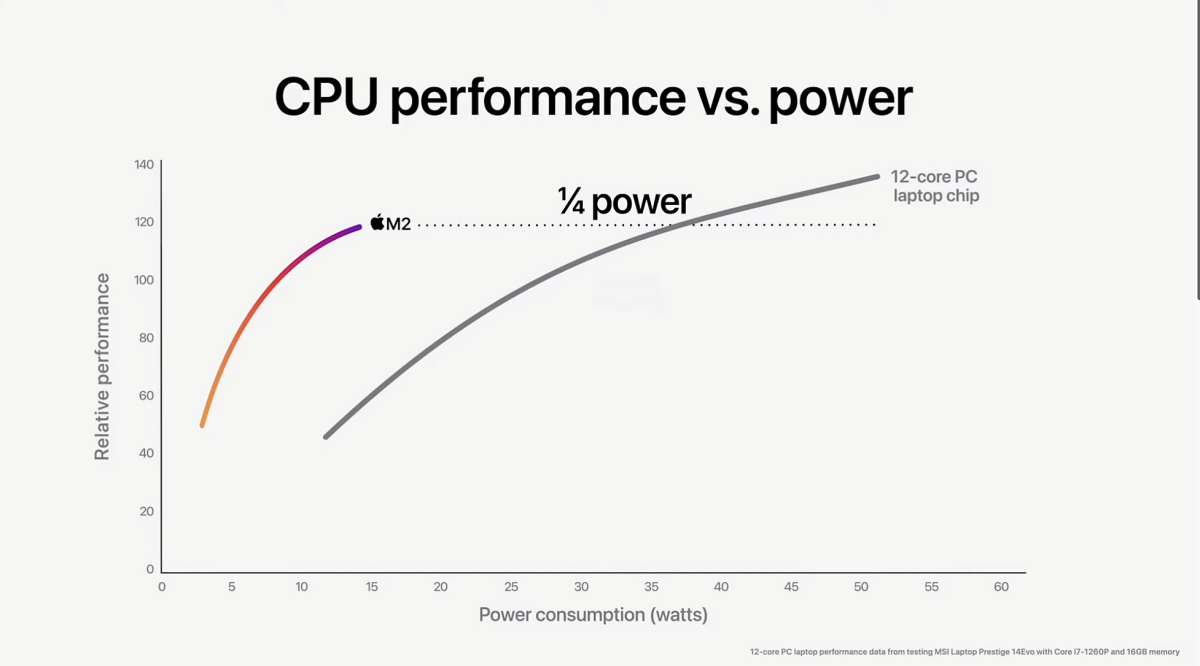 Obviously, it's not all just about raw performance, and Apple's main point is it can offer outstanding performance with the M2 at a fraction of the power consumption of an Intel Core i7-1260P CPU. That's actually been Apple's key strength, since it can't lean on the we're so much faster argument anymore.

I won't be petty and belabor the point that it's not a shock a 5nm chip is more efficient than a 10nm chip. But I'm sure someone will do so on Reddit, YouTube comments or Twitter. In the end, if you're into longer battery life, you have to seriously consider a MacBook as an option.

But I do want to point out a fallacy of anyone arguing a Core i7-1260P is a full-time power hog. Intel's mantra of late has been to push extremely high boost clocks for a few microseconds or milliseconds to increase responsiveness. In reality, that MSI Prestige 14 Evo would coast along at low power usage, and when you click on a browser link, it could spike up to 55 watts for a fraction of a second and then settle down again to low power use.

I don't want to appear partisan and only show off the split wins by Apple on the M2. One area where Apple appears to dominate is in graphics. With its additional graphics cores, Apple says it can outperform the Samsung Galaxy Book2 360 with a Core i7-1255U by a whopping 2.3x while using less power, too. 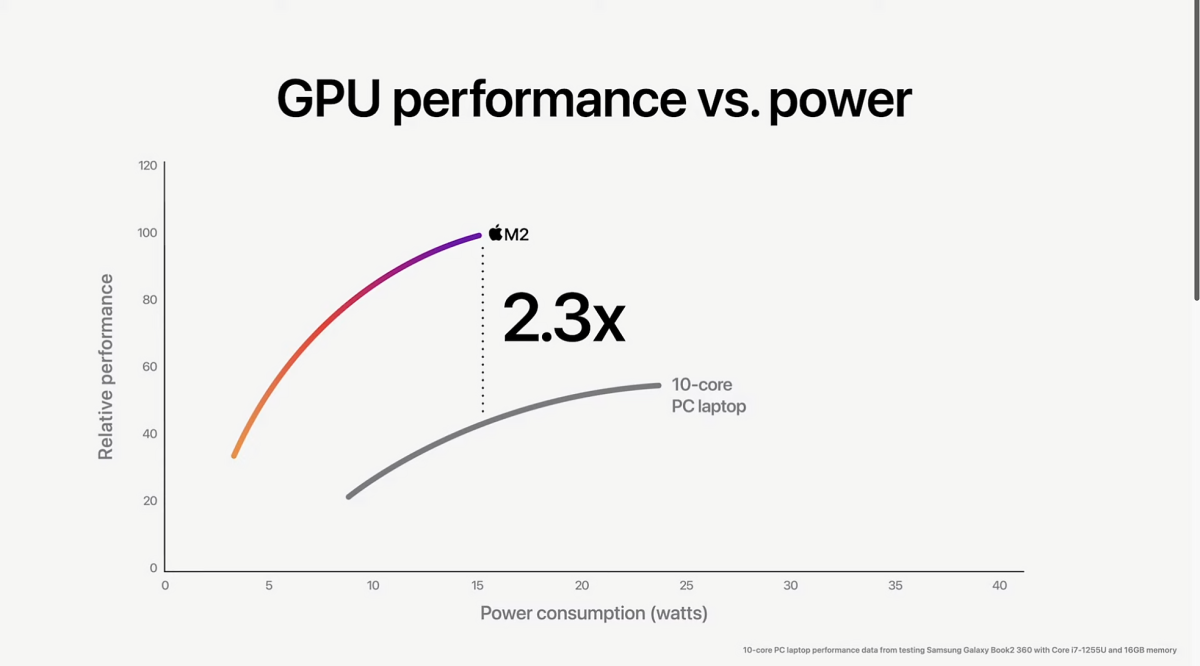 That's something to be lauded, as Intel's Iris Xe graphics, although older, are a huge improvement over its UHD graphics. This last point is something sure to irk AMD fans who are still riding high by how surprising the new Ryzen 6000-series is performing. With its RDNA2 graphics cores and 6nm process, it's currently easily outpacing Intel's Iris Xe as well.

How would the M2 fare against an AMD Ryzen 7 6800U? That's something we're curious to find out.

In the end, the M2 looks to an impressive sequel to the M2, and in its very tight coupled ecosystem of software and hardware, a pretty awesome upgrade for Mac fans who haven't even made the switch to M1 yet.