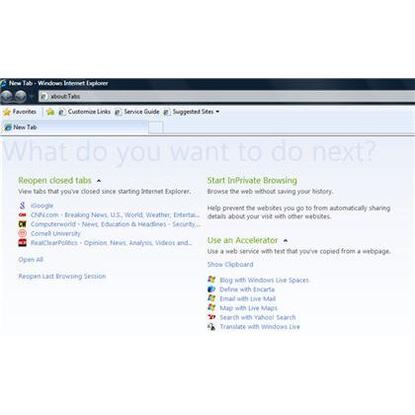 When you open a new tab, instead of getting a blank screen, the page opens with a variety of useful links.

Those who expect Internet Explorer 8 to be a warmed-over version of IE7 or a me-too response to Firefox 3 will be surprised by the just-released Beta 2 of IE8. It offers a well-thought-out set of features that makes Web browsing faster and more intuitive, including more intelligent tabs, a much improved Address Bar, and new tools designed to deliver information from other Web pages and services.

The previous beta of Internet Explorer was labeled a developer's preview. It lacked many of the new features -- notably, those aimed at improved navigation and better use of tabs -- revealed in this first beta of IE intended for general consumers and enterprise users.

People who frequently use multiple tabs will welcome the introduction of what Microsoft calls Groups. When you open a new tab from an old one, the new tab is placed directly to the right of the originating tab, rather than to the right of the right-most-opened tab, as in IE7. In addition, the new tab is given the same color as the originating tab. In this way, all of your related pages are automatically grouped next to one another and color-coded. You can also easily move tabs between groups. Simply drag a tab to another group, and it takes that group's color and becomes part of the group.

And wait, there's more: You can right-click on any tab to control its entire group, including closing the group, duplicating the group and removing the chosen tab from the group. From the same right-click menu, you can also reopen individual tabs that you've closed and perform actions on individual tabs. One useful feature is missing: the ability to reopen an entire tab group. Instead, you have to reopen each tab individually. Microsoft says that it is considering adding this feature to the final version of IE8.

Another subtle improvement is aimed at better navigation and browsing. When you open a new tab, instead of getting a blank screen as you did in IE7, the page opens with a variety of links, allowing you to reopen tabs you've previously closed, reopen all the tabs from your last browsing session and use several new IE8 features, including InPrivate Browsing and Accelerators. (We'll get to those features later in this review.)

The Address Bar in the beta has received a significant makeover, and it's been much improved. Like the Awesome Bar (officially the Smart Location Bar) in Firefox, the IE8 Address Bar now adds functionality well beyond merely providing a place to type a URL. Both of them don't just list recently visited sites as you type, but also grab URLs from your bookmarks. Both also look at page titles for matching text.

However, IE8's Address Bar has features that Firefox's does not. It sorts its results by category (such as History, Favorites and Feeds) and searches through RSS feeds. You can also edit the list -- for example, by deleting entries from it, so that the next time you type in that text, those entries won't appear. On the other hand, the Awesome Bar includes icons at the far right that let you quickly add a page to your Favorites or to subscribe to any RSS feeds on a page you're visiting; IE8 doesn't have those features directly in the Address Bar.

IE8 includes several new privacy and safety features, but the one that will get the most press is what's called InPrivate Browsing. When you launch an InPrivate Browsing session, all traces of your browsing session vanish when you close that instance of the browser. Cookies, temporary Internet files, browsing history, form information, and usernames and passwords -- they all vanish.

When you choose the menu item Safety -- InPrivate Browsing, a new browser instance launches, and you see an InPrivate logo in the Address Bar. Browse to whatever sites you want, and when you close the browser session, all information vamooses.

Whatever it's used for, though, it's a nifty, useful feature, and exceptionally easy to use.

Microsoft has also introduced a somewhat confusing privacy feature called InPrivate Blocking, which is designed to prevent Web sites from sharing information about your browsing without your knowledge.

Sites commonly share content with each other -- for example, a site may include an interactive map or stock data that comes from a partner site, or may put another site's ad on its page. This is certainly useful, but has privacy implications as well.

When you're on a site, it may gather information about you, such as your IP address, screen resolution and operating system. This information can be gathered even if cookies are turned off. When Web sites share content, this information about you is shared as well. So you may be on one site, but the information is sent to another site, commonly called a third-party site. This can be particularly problematic when a content provider or ad supplier provides content or ads across the Web, because then it can track your travels across numerous sites.

In addition to InPrivate Browsing and InPrivate Blocking, Microsoft has added several other new security features. For example, Microsoft has tweaked its antiphishing filter, called the SmartScreen Filter, by having the filter warn you not just about antiphishing sites, but also about sites known to distribute malware. It has also added a safety feature that blocks the most common type of cross-site scripting attack. In addition, it claims that it has improved protection against malicious ActiveX controls.

Two of the more intriguing new features in the IE8 beta are Accelerators (which were called Activities in the developer's beta) and WebSlices. An Accelerator is a kind of mini-mashup that delivers information from another Web site to your current browser page, or that interacts with another Web site or service. For example, if you're on a page with a street address, you can highlight the address and choose an Accelerator such as Live Maps or Google Maps. The Accelerator will then display the map in a pop-up or open another tab, depending on how the Accelerator has been written for that site.

Not surprisingly, many of the Accelerators that ship with the beta are for Microsoft services, such as Live Maps, Encarta and Windows Live Spaces. But there others as well, including from Amazon, Wikipedia, Google and Yahoo. Any site can write an Accelerator using basic XML, so many other sites may eventually write them as well.

Another intriguing feature is WebSlices, which are like RSS feeds pumped up on steroids. WebSlices deliver constantly changing information to IE -- and as the name implies, they don't deliver it via text, but instead via graphically rich, interactive content. Essentially, a WebSlice delivers a fully functional slice of a Web page to you.

When you're on a page that has one or more WebSlices available, a WebSlice icon on the Favorites bar turns green. Click the down arrow to its right, and you can choose a WebSlice to subscribe to. A listing for the WebSlice then appears on the Favorites bar, and when its content changes, the title turns bold. Click the title, and it drops down and displays the content. You can then click through to go to the Web page that houses the slice, or simply view it in the drop-down.

For example, if you're following an auction on eBay, you can subscribe to a WebSlice of the auction page. When an event happens in the auction, such as someone posting a new bid, you'll be immediately alerted.

In theory, WebSlices are useful, but it's not clear how they will be in practice. At the moment, there are very few WebSlices available, and even those that are available aren't easy to find. Developers have to write code for them, and if they don't, WebSlices will become just be one more nifty-but-useless feature.

There's plenty more that's new in IE8. Chief among them is a long overdue feature that Firefox has had for some time -- the ability to recover from a crash and restore the entire session or an individual tab. In fact, IE8 goes Firefox one better with its crash-recovery feature. When a tab crashes, IE8 isolates that crash as much as possible so that the rest of the browser and its tabs aren't affected.

Also, the Search box has been slightly retooled. As you type, past search terms and suggested searches appear, as do pages from your history list. In addition, all of your search providers appear as icons beneath the bar as you type, allowing you to easily choose among them. And search providers can also turn the Search box into a kind of mini-application. They can, for example, deliver thumbnail pictures to you depending on your search term and even suggest specific matches as you type.

One of the nicer small changes in IE8 is a feature that makes it easy to identify the domain you're currently visiting, no matter how long and complex the URL is. In IE8's Address Bar, only the domain (for example, computerworld.com ) is black -- the rest of the URL is gray. So you can easily spot your current domain -- which is a safety bonus as well, since you're less easily victimized by spoof sites.

There's also a new Favorites bar that includes the old Links bar and the WebSlices feature and RSS feeds.

Also welcome is what Microsoft calls the Compatibility View, which in essence tricks a site into believing that you're running IE7. If you run into compatibility issues on a site, click the small icon of a broken page at the right of the Address Bar, and you'll be able to view the site properly. IE8 remembers that it needs to use Compatibility View for a given page, so you won't have to click it each time you visit.

And Microsoft also claims that IE8 navigates AJAX-based sites better. Because these sites often refresh only one portion of the page, it can be a bit confusing when you hit the forward and back navigation buttons and end up on a separate page. According to Microsoft, users should be able to go forward and back to their last action on that page instead.

Features for the enterprise

Most of the new features visible in IE8 are consumer-oriented, but the browser includes a number of enterprise-specific features as well. Microsoft claims it made more than 100 new Group Policy settings for IE8 after deployment, such as whether IE8 should run in IE7 or IE8 standards mode.

In addition, system administrators can slipstream IE8 into operating system images (only with Vista or Windows Server 2008 systems), so that IE8 doesn't need to be installed separately. Administrators also have more granular control of ActiveX controls.

This beta is much improved over the first developer's beta of IE8 and includes many new features, such as improved tab handling and better search. Consumers who want to see a preview of the future of IE and enterprises that need to plan for the next version of the browser would do well to download it.

Keep in mind that IE8 is beta, and therefore may be buggy. In addition, if you install it, it will replace IE7 rather than run alongside it, so you won't be able to run IE7 and IE8, although IE8's compatibility mode does a good job of working with sites built for IE7.

At this point, it's too early to compare Internet Explorer 8 to Firefox 3, because there still may be design changes. But when it does ship, it'll certainly be a worthy competitor. Its tab handling is superior in some ways, and the Accelerators and WebSlices are worthy additions. When a more complete beta arrives, it will be easier to do a real head-to-head comparison.