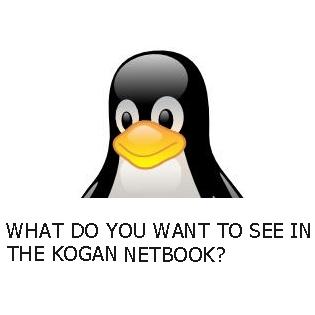 Kogan, the Australian company behind the recently delayed Android-based Agora smartphone, plans to release a netbook and is turning to the community for inspiration and advice. In a blog entry on Kogan's Web site, company founder Ruslan Kogan asked for suggestions for the device's features.

The screen size has already been fixed at 10.1in, and Kogan also indicated that the notebook will use an Intel Atom. In the blog entry, he asked for input regarding specifications like RAM, operating system and bundled software.

Kogan told PC World that "community interaction is vital for the success of the Kogan brand. As an online company it is essential that we are interacting with customers and potential customers through many digital mediums."

The blog entry has already attracted dozens of responses, with comments covering battery life, hard drive size and the netbook's colour. The operating system has been the most heated topic of debate, with preferences ranging from Windows XP to the upcoming Windows 7 and popular Linux variants. Some have even suggested the use of the Open Handset Alliance's Android operating system, originally designed for smartphones.

It seems that the comments have already had some effect. According to Kogan it is more likely that a Linux-based operating system will be installed on the device than it was before, with a spokesperson saying the company had considered it largely the domain of enthusiasts before receiving community feedback. In addition, the standard memory configuration has bumped from 1GB to 2GB.

Comments on the blog entry are still being received and noted, though Kogan plans to finalise the design in about a week.

Kogan is known for its low-priced consumer goods but the netbook market is a particularly competitive one. Netbooks from manufacturers such as ASUS and Dell can be purchased for as cheap as $450; comments on the blog entry suggested that a Kogan-branded netbook would have to undercut its competitors significantly in order to gain a foothold in the market.

Ruslan Kogan told PC World that the netbook is expected to ship in late March; no pricing information has been released.