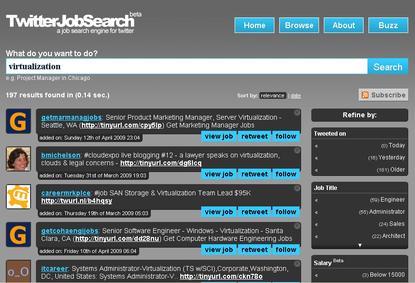 The social media phenomenon that is Twitter continues to attract third-party developers with the London-based WorkDigital developing TwitterJobSearch, a job search engine for the microblogging service now available online (in beta, of course).

TwitterJobSearch.com claims to be the “social media job search engine” and allows people to search for jobs in twitter feeds simply by entering keywords in the search engine.

More than 42,000 new jobs have been indexed by the search engine in the last week, according to WorkDigital.

Using social networks for recruitment is nothing new with LinkedIn and Craigslist both popular portals for headhunting, but with so much activity now around Twitter it was only a matter of time before people started using it for job advertising.

“Until now, search engines for social media sites merely looked for words. We're looking at context,” according to WorkDigital.

MySQL developer Colin Charles described the service as “quite possibly” useful on his blog.

“I typed 'mysql' and found 3,092 results in 30 seconds,” Charles said. “You can then filter by job title, salary, skill set, job type, and more, as well as sort it by relevance or date.”

Charles believes TwitterJobSearch Would be more useful “if you could filter out Twitter users (like @itcareer, for example)”.

By its own admission, WorkDigital is not associated with Twitter.com, but makes use of “Twitter's really quite excellent open API”.